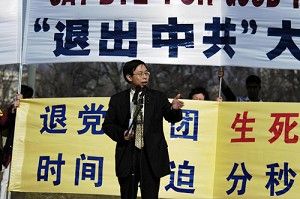 The Withdrawals from the CCP is a Significant Spiritual Awakening Movement

An interview with Mr. Ye Ning, a renowned human rights lawyer in New York and Washington DC and an expert on China issues.

Reporter: At this historical moment when 5 million people have withdrawn from the CCP, what are your feelings? What do you think is the significance of the tide of CCP withdrawals?

Ye Ning: There are a lot of small countries in this world that don’t even have a total population of 5 million, so 5 million is a very big number. For so many people to withdraw from the CCP in such a short period, less than a year, this is a very significant thing.

The significance is not only in the number of people, but also in the shocking information that it brings. It shows a revolution in thought, and it shows several important facts:

Firstly, the CCP, the most stubborn centralized rule of political power in the international Communist movement has never before been able to be disintegrated through violence. But now there is a peaceful and rational way of ending the rule of the CCP. The withdrawals from the CCP are demonstrating a new view of this method.

The symbolic significance of this is greater. It brings a new realm of thought, a change in political culture, has an impact in the realm of ideology, and begins a chain-reaction. There is a theory called the butterfly effect, which states that a chain reaction set in motion by the tremor of a butterfly can change the world.

The collapse of the CCP does not come when there is only one member left. Whenever China encounters a dramatic change, it is like a tree falling, which causes all the monkeys on the tree to scatter. Everyone naturally craves stability, and therefore they will all abandon the CCP as soon as possible.

The wave of withdrawals has also set an unprecedented foundation regarding the issue of the CCP and its members. “The Nine Commentaries on the Communist Party” has clearly outlined how not to do things in China. After having read the document, the reader can envision the potential for the emergence of an organized, capable, very rational, and extremely well-operating model that can replace the CCP after its collapse. This point is significant for the China’s freedom and democracy.

Reporter: Many people say that “The Nine Commentaries” initiated this wave of CCP withdrawals. How do you see it?

Ye Ning: “The Nine Commentaries” was very well written, applying theory to reality, hitting the most important points about China, and even more importantly, proposing a new topic and new view in solving the problem of China.

In fact, “The Nine Commentaries” isn’t just an article, it is a moving force. The more persuasive the theory, the more people it will move. “The Nine Commentaries” not only initiated the flood of Communist Party withdrawals, it created a basis for fundamental, rational, and peaceful social renewal. Not only is this a big transformation for the political culture and the language system under the Chinese centralized political power, but it also provides a systematic theory for the impending changes in political culture.

From this point of view, “The Nine Commentaries” truly has an important historical function and influence.

Reporter: Many people say that the wave of Communist Party resignations is a mind-awakening movement, helping recover peoples’ morals. How do you view this?

Ye Ning: It truly is a moment of awakening. It’s a process of the Chinese people standing up from their kneeling positions. The Chinese people have always suffered the suppression of ideas and mind enslavement because of the total power held by the CCP. The withdrawals from the Communist Party are the fundamental revolt and denial from those who have been enslaved for such a long time.

The drop in morals is the inevitable result from the long rule of the CCP. Along with the denial of the CCP’s type of rule comes an organized force of higher moral standards. This will of course bring the Chinese peoples’ awakening and moral recovery. It will bring to the entire Chinese nation a rebuilding in morals. This is exactly what is urgently needed by this nation.

It also shows that while the CCP has not completely perished and dropped off history’s stage, a substitution force with a spiritual culture has already emerged.

Reporter: What do you think the significance is to publicly announce resignation from the CCP?

Ye Ning: Announcing the resignation from the party is not only an expression of power; it is also a duty. To draw a distinctive line between yourself and a group of criminals like the CCP, and to promptly depart from this group is the responsibility of an upright person. It is also to be accountable for history, for human beings, and for facing justice in the future.

It is undoubtedly necessary to stand up and make the withdrawal announcement before the CCP’s collapse. It not only gives an impetus to the entire society, it is also a representation of the individual’s responsibility.

Reporter: Perhaps some people still hold an illusion that the CCP would carry out internal reform. How do you look at this?

Ye Ning: This kind of fantasy has no basis in fact, nor any significance, it is only an illusion.

Besides, even if the CCP wanted to reform of its own accord, it would need an environment with enormous pressure to do so. Only then would there be a possibility. A fundamental and thorough reform would invariably cause certain changes in the structure of the existing interest groups. The CCP, with vested interest, would not possibly reform without tremendous pressure.

Motivations for this kind of reform do not come from the good wishes of policy makers, or from the benevolence human nature. The fundamental decision of the direction of the reform is based upon larger interests, internal and external pressure. Without these factors, it is impractical to wish for any significant changes.

Speaking from this angle, even those who still hold illusions about the CCP should also support this large-scale global party withdrawal wave.

Reporter: Some people may worry about how China would manage without the CCP? What do you think China would be like after she abandoned the CCP?

Ye Ning:The CCP has developed a system of wording things in a way that is deceiving, which is used to maintain their regime. It says something like, “Once the CCP has let go of power, the Chinese people would be like a herd of livestock without breeders. They would starve to death or run around like a chicken with its head cut off. It even says something like, “Once the CCP gives up the leadership, China would have a political leadership vacuum.” In fact, these kinds of lies have already been discredited.

Outside the CCP, organizations that are politically very mature and have a superior moral and cultural legitimacy have already appeared. These organizations have a grass-roots character and are very widespread. With such a situation, the Chinese nation has no reason to be concerned that society may become anarchic after the collapse of the CCP.

Reporter:How do you look at the Chinese future and its way forward?

Ye Ning: The hope and future of China’s way forward will be brighter than Eastern Europe and some other centralized countries in Central Europe. The possibility of a bright future has been quite obvious because China is more prepared.

We are quite lucky to see this kind of very organized opposition appearing and growing strong. This is a great, earth-shaking matter! Therefore, the future is just fantastic!