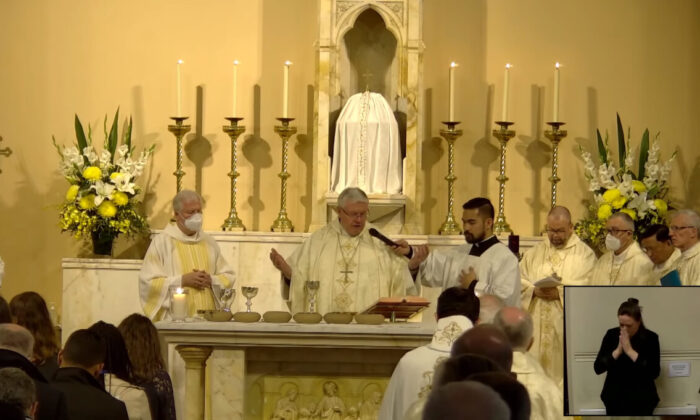 Archbishop Charles Balvo celebrates the Opening Mass of the Second Assembly of the Plenary Council from Mary MacKillop Memorial Chapel in Sydney, Australia, on July 3, 2022. (Screenshot via The Epoch Times)
Viewpoints

The Witch of Endor

If you have a theoretical interest in Christianity, you should watch a video of the Australian Catholic Church’s Plenary Mass on July 3.

The service doesn’t actually begin for about seven minutes of the video (it was poorly edited), and the first 10 minutes thereafter are devoted to the Aboriginal “smoking ceremony,” a reported religious practice dating back to the 70s. It is accompanied by the evocative music of the didgeridoo.

Much more importantly, and of enormous theological significance, what follows is an invocation of “male and female spirits” by a woman who is introduced as an elder of the indigenous community.

The invocation of spirits is and always has been strictly forbidden by the whole Christian church.

The clearest early manifestation of this prohibition is found in the Bible, in the First Book of Samuel, where King Saul secretly consults a witch at Endor, having previously forbidden his subjects to engage in any form of necromancy. This deceit on Saul’s part leads to his own downfall and suicide. Such a practice has always been regarded, in both Judaism and Christianity, as an insult to God.

The inclusion of this ritual at the start of the Plenary Mass was completely inappropriate, without intellectual content or integrity.

It should never have taken place within a Christian Church. The fact that it did, and that it did so as a sort of preface to the Eucharist, and in the presence of a high proportion of the bishops, is almost beggars belief. You couldn’t make it up.

It’s a sorry fact, however, that in today’s Church, such an absurd folly is all too easily believable. The Australian church, like so many others in the West, has lost its way.

There are some good grounds for taking heart. As I write this, fewer than 5,000 people have watched the clip. It has therefore been viewed by a tiny proportion of the nation’s practising Catholics, an even tinier proportion of the nominal ones, and a vanishingly small number of their non-Catholic fellow citizens.

As an item of news, it ranks with small town fetes and minor folk festivals and well below even the most trivial localised sporting event in our sports-mad country.

So really, on the larger scale of things, the deliberations of the Plenary don’t carry much weight. The delegates’ oh-so-predictable apologies to all the usual victims (predictably right at the top of the agenda) will contribute nothing to the unity and harmony of the nation, but neither will they further weaken its social fabric.

Indigenous Australians and the Church

As Australia advances in maturity—if not always in wisdom—that sad old woke company of baby boomers, rusted into the fancies of the 70s, is fast fading into insignificance and oblivion.

I do not question the personal integrity of those who conducted the smoking ceremony. Undoubtedly, they passionately value their aboriginal inheritance and consider its preservation a matter of the highest import.

But the plain, sad truth is that the culture and language of some of the coastal aboriginal tribes are now extinct and that rituals such as this are largely synthetic and, therefore, in a strict sense, spurious.

“My DNA predates Australia,” claimed the elder, and that is no doubt correct. But what DNA? Aboriginal DNA only, or the DNA of all the other peoples whose blood flows and blends together in our veins?

Many Australian families of Indigenous and European descent, or both, have lived here for centuries. Is not the land our common home?

The congregation was invited to touch the ground, and all obediently complied. A nice gesture, perhaps, but hardly appropriate at a Mass that has its focus on Heaven.

A second non-Aboriginal speaker apologised on behalf of the Church for its abuse of Indigenous people. Nothing new in that, of course, and fair enough in its place.

But surely, we have come of age and can take this as read, after years of “sorry” days, could we also acknowledge the good work that men and women of the Church did for many Aboriginal groups around Australia: not just religious instruction (which counts for little in the secular mind) but education in the arts and sciences of the world, social work, housing, medical care. And most of that at a time when the state did next to nothing to aid the native people.