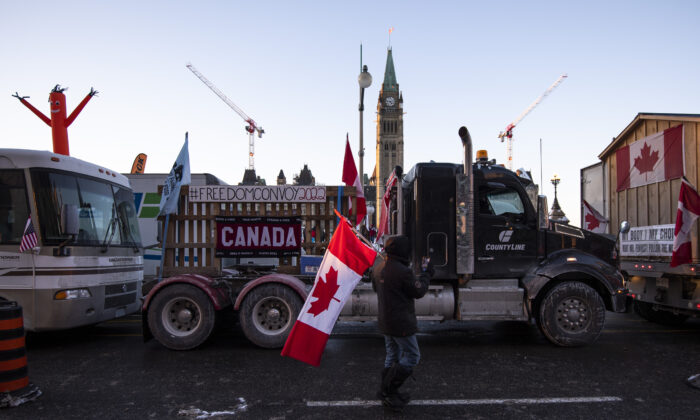 Trucks participating in a cross-country convoy protesting COVID-19 mandates and restrictions are parked on Wellington Street in front of Parliament Hill in Ottawa, on Jan. 28, 2022. (The Canadian Press/Justin Tang)
Viewpoints

The opening lines of Shakespeare’s “Richard III” express the villainous intent of the twisted and opportunistic Duke of Gloucester, of the House of York, to seize the crown from his brother’s son and legitimate heir through deceit and treachery. Richard is one of Shakespeare’s blackest villains.

As I write, in the bleak winter conditions of Canada, a 70-kilometre convoy of trucks is descending upon Ottawa from across Canada and the United States. It has been moving inexorably for days. The spark of this conflagration is the Canadian government’s latest mandate, that truckers henceforth be double-vaxxed to be allowed across the Canada-U.S. border.

Safety is, as usual, the pretext. But recent admissions that Omicron fatality rates may be less than the seasonal flu, and that boosters cannot stem either infection or transmission of the latest variant, have prompted governments more committed to science and less to scientism—or countries with greater internal political opposition—to throw up their hands and drop their mandates.

In those countries, it may mark the beginning of a return to a culture of liberty and science. In Canada, we are not quite so progressive, yet.

We are still in a scientistic dictatorship.

And we are therefore in the midst of the winter of our discontent.

Canadians are not easily provoked to the streets. We do not protest outside in January without being sorely tried and pushed to the breaking point. It appears we have reached that point.

The most basic condition for science to operate is not only the ability to publish the truth, but, as Karl Popper rightly noted, also to publicly falsify a scientific theory. Falsification is a form of dissent. It cannot be achieved under a state of emergency if the theory is also public policy. Emergencies require action, and public consent. Mandates are the direct result of governments with emergency powers, and extended mandates directly result from governments that like their powers a bit too much.

How much? Will it be to the total destruction of liberty and science?

Witness, there is no control group for the true effect of experimental mRNA shots except those who have not complied with the mandates. And the government seems committed to mandating away that control group. It deems them political dissidents, bad actors.

It defies both logic and science, but it is in keeping with the authoritarian character of scientism. To stay “scientific,” it will manufacture consensus where there is none, until there is no dissent.

And it has led to increasingly erratic and contemptible public declarations by our politicians and the health-care bureaucracy behind them. Having fired the essential health-care workers who would not be vaccinated, creating a health-care crisis, they are now calling the truckers, whether they are vaxxed or unvaxxed—another essential service—a “fringe group,” “extremists,” and even “terrorists.” The convoy suggests that there are a LOT of them.

The irony of this situation should not be lost.

What are they serving then?

“Science” is carrying a lot of water for special interests in Canada.

Over the past two years, while the politicians’ commitment to a Green New Deal has transformed the economy under lockdown conditions, and while public propaganda sponsored by Facebook, Google, Apple, Amazon, Microsoft, etc. has collaborated with them to inflate the profits of the Screen New Deal, the conditions for science, just as those for liberty, have been placed in suspended animation.

This is true throughout the world. But unlike our American cousins, who have an established culture of dissent, Canadians’ established deference to authority, a fallacy in logic, is proving more dangerous politically and revealing itself as an appeal to the authoritarian. A sense of desperation has crept in, and a hope of redemption.

Nobel Prize-winning author John Steinbeck, in his novel “The Winter of Our Discontent,” wrote:

When a condition or a problem becomes too great, humans have the protection of not thinking about it. But it goes inward and minces up with a lot of other things already there and what comes out is discontent and uneasiness, guilt and a compulsion to get something—anything—before it is all gone.

This, it seems, is the real cause of the convoy, and the huge popularity of the protests. It is not a protest against a single mandate; it is a larger, more desperate protest against an opportunistic and deceitful autocracy that believes too much in its right to rule with impunity. It’s clear there is no exit plan to what they call the “new normal.”

It’s easy to identify it personally with our pandemic prime minister, Justin Trudeau, our thrice-vaccinated leader, who having maligned the convoy, then declared he was going into quarantine for five days—coinciding with the arrival of the convoy—despite a negative result on a COVID test. Just to keep others safe, you understand.

But there is more than desperation in the convoy. There is hope in those whom the government has marginalized and disenfranchised. As Dr. Martin Luther King Jr. said in his famous speech, “I Have a Dream,” echoing Shakespeare and Steinbeck:

This sweltering summer of the Negro’s legitimate discontent will not pass until there is an invigorating autumn of freedom and equality.

The declaration of emergency must be revoked.

Spring is on the horizon.