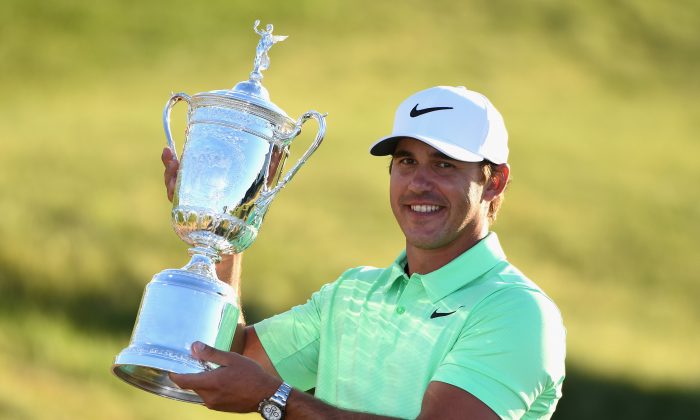 Brooks Koepka celebrates with the champion's trophy after the final round of the 2017 U.S. Open at Erin Hills in Hartford, Wisconsin on June 18, 2017. (Ross Kinnaird/Getty Images)
Golf

The Winners and Losers at Erin Hills

ERIN, Wis.—The 117th U.S. Open marked a first for both Erin Hills, the host site, and the state of Wisconsin. The week produced a range of interesting storylines that showed top-tier shot-making and unexpected hiccups at crucial moments.

For the United States Golf Association (USGA), the return to the midwest for the first time since 2003 showed how crucial it is to make sure the championship of American golf is staged at other locations beyond the east and west coasts.

There were some notable winners and losers of the event in the Badger State.

The world’s top three players—Dustin Johnson, Rory McIlroy, and Jason Day all failed to make the 36-hole cut. This marked the first time since the world ranking was created in 1986 that all three of the top-ranked players headed home earlier than expected.

Johnson waited until Tuesday of tournament week to arrive given the birth of his second son the day prior. The missed cut at the U.S. Open marked the second straight missed cut for the world’s No. 1-ranked player.

McIlroy’s indifferent play came from a layoff of several weeks to rehabilitate a tender back.

For Day, his play was far from being on form with wayward driving and a balky putter. The Aussie needs to revive himself at The Open Championship in a few weeks.

Rickie Fowler seized the moment with a seven-under-par 65, matching the U.S. Open record of most under par in an opening round. However, the 28-year-old ninth-ranked player was unable to keep pace thereafter.

Justin Thomas ascended the leaderboard with his stellar third round 63. Unfortunately, the three-time PGA Tour winner this year was as flat as a pancake in the key final round and faded badly with a closing 75.

FOX‘s coverage certainly improved from its first U.S. Open in 2015 at Chambers Bay, but lead announcer Joe Buck, despite his clear desire to do his best, is out of his element when reporting on golf. Hats off to FOX for kayoing original analyst Greg Norman after his first year. Paul Azinger brings a refreshing vigor and is not afraid to be straightforward when situations call for total candor.

Brooks Koepka, the new U.S. Open champion, showed immediately in the final round that he was ready to play, firing two straight birdies at the first and second holes. His ball striking was peerless given the blustery wind conditions. The 27-year-old missed just one green during the final round and a total of ten for the entire week. The now 10th-ranked player in the world is one of golf’s emerging young stars with future majors beckoning.

The USGA—After last year’s rules debacle that nearly derailed the event, the governing body of golf in America needed to resurrect its position as the lead force in administering the country’s national championship. Going to America’s heartland with its marquee event was a roll of the dice that turned out very well.

Erin Hills was prepared correctly and the USGA was sensible in carefully calculating the delicate balance between making the course tough but fair. Erin Hills provided a good bit of high quality golf and not the awfully dull and tedious slog that so many past U.S. Open have produced.

Hideki Matsuyama, Japan’s most gifted golfer, clearly made a strong move with a six-under-par 66 in the final round. In U.S. Opens, posting a score while other players are left with several holes to play can sometimes result in winning the event as the pressure mounts on the finishers. There’s little question that his golf game has all the ingredients to make him Japan’s first ever major golf champion in the very near future.

Wisconsin’s golf ascension—Going to a new venue and host state was a risky move but by the Open’s conclusion, it became clear the Badger State has clearly asserted its stature. Erin Hills did a fine job in hosting the U.S. Open. Hats off to course ownership in closing the public course to all play at the end of 2016 to ensure top tier playing conditions.

Steve Stricker—The Wisconsin native brought justifiable pride to the home crowd as their favorite son played well, finishing in a tie for 16th. Initially, Stricker had asked the USGA to provide him with an exemption into the event. That request was turned down and Stricker’s only path to the Championship was through an arduous 36-hole qualifier. His next mission will be captaining the USA squad in September during the President’s Cup matches.