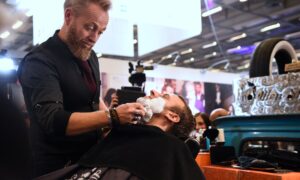 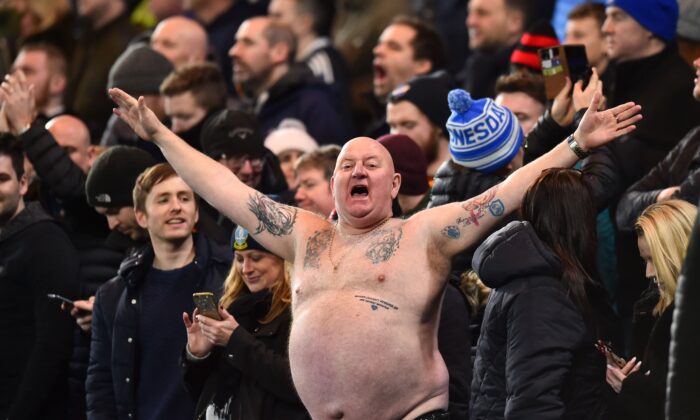 The Will to Ugliness, and Decline in Culture, Among Soccer Fans

Looking at the Guardian recently, the house journal of the British woke intelligentsia, I noticed a picture of a soccer crowd at the current European championship—a crowd as overwhelmingly male as any meeting of atomic physicists. They looked so horrible and ugly, so brutish, that I assumed at once that they must have been English.

Not a bit of it: they were Danish. One of them at the front of the crowd, with that kind of body-builder’s physique slightly run to fat (but still formidable), shaven-headed and tattooed from neck at least to the waist, his mouth wide open and his eyes full of aggression, looked like the kind of pre-Christian Danish warrior to whom Kipling referred in his poem Dane-geld:

It is always a temptation to an armed and agile nation
To call upon a neighbour and to say –
‘We invaded you last night – we are quite prepared to fight,
Unless you pay us cash to go away.’

The rest of the men in the crowd were not much more attractive.

It has to be remembered, however, that Denmark is not one of the basket-cases of Europe, but one of the richest countries in the world, about as rich per capita as the United States, and with very minor social problems by comparison.

It is egalitarian in ethos and practice and has possibly the highest average level of education in the world. In all probability a higher percentage of its population is fluent, and literate, in English than that of the United States.

So social deprivation is unlikely to be the explanation of the willful ugliness of the Danish crowd. Nor are the Danes famously ugly by heredity. There is a will to ugliness evident which is surely significant and requiring of explanation.

It might be said that there is something inherent in a football crowd that leads to mass ugliness. This is not so. The ugliness is nowadays one of soul more than of visage. In my youth, I was myself enthusiastic about football, and wasted untold hours travelling to and watching matches. I cannot now recapture my enthusiasm: I can only say that it was so.

In those days, soccer was a much more proletarian game than it is now. Spectators could not afford to travel to other countries, or even other cities, to follow their team. The price of admission to a match was, by current standards, laughably small, even allowing for inflation.

The stadiums were extremely uncomfortable and mass ranks of people, packed together, stood for the duration of the match, and often long before, on narrow terraces. Often there was no roof over their heads, and if it rained—well, so much the worse for them. Conditions have improved out of all recognition and are now incomparably more luxurious.

But if you look at a photograph of crowds in those days and compare them with that which appeared in the Guardian (which I have very little doubt was not a misrepresentation), a quite different impression comes to mind.

Sixty or more years ago, when my football mania was at its height, or depth, the men—again, overwhelmingly men—looked like civilized beings. They even dressed respectably for the occasion. They were neither brutes nor wished to appear as if they were brutes.

From the purely economic point of view, of course, they were far worse off than the men in football crowds today, and in the formal sense (number of years in education) were probably worse educated, even much worse educated.

And yet their cultural level, if culture includes such characteristics as mannerliness, was far higher. I even remember overhearing, when I was a small boy in the crowd, a man say to those around him, “No swearing, there are children present.”

Nowadays, if there were any children present, he would be more likely to say, “Swear as much as you like, children have to learn.”

The article that accompanied the photograph in the Guardian quoted a Dane, a woman (oddly enough, given the picture), as saying “Football is more than just a game. It’s also about humanity and what we value in life—like togetherness, team spirit and fighting for the ones we love.”

She went on to say, with the sublime bathos of a spoilt young person completely without historical information, that (after a Danish victory in the competition) “People began coming together in a way almost like when Denmark was liberated from [Nazi] occupation after world war two.”

The shallowness of all this is to me terrifying. My mother was a refugee from Nazi Germany at the age of 18 and never saw her parents again. Her first fiancé, a fighter pilot in the RAF, was killed in the defense of Malta, and wrote her a letter on the very eve of his death.

To have experiences like this (which, alas, were themselves far from the worst possible) reduced to the same level as a victory in a football match infuriates me. Such a comparison is a powerful tribute to the possibility of triviality.

But the kind of “togetherness” praised by the person quoted is worse than merely shallow, it is sinister, or would be if the population of Denmark were larger than 5 ½ million and Denmark were a country capable of disturbing the peace of the world.

The kind of passion that the person quoted invokes depends on regarding one’s national opponents in a football match as enemies, for why else would one have to “fight for the ones we love.” A game of football is a game of football, not a war to the death.

It is perfectly possible to be a patriot without regarding other countries as enemies against whom one must defend one’s loved ones. The word is not a zero-sum game. To love one’s country is not to despise others, which may in many respects be the equal of, or superior to, one’s own.

But the puzzle remains: why should people—especially those who are among the most fortunate who ever lived—deliberately make themselves look as ugly and menacing as possible, often by means of painful self-mutilation?