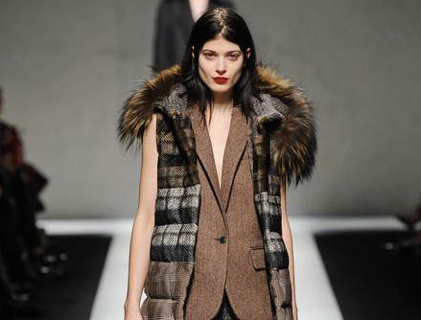 The Will and the Way of Max Mara

A look at the jacket from the Max Mara Pop collection of Fall/Winter 1965–66 and you know right away why the label has been so successful since its launch in 1951. The image is on the Max Mara website—a model wearing a cropped jacket with a high collar and prominent pockets that add graphic detail. It is strikingly modern and very much like a designer citation of 1960s style revamped and reinterpreted for Fall/Winter 2014.

The look encapsulates the company’s ethos of a pragmatic approach to designing “ready-to-wear,” an approach that is evident in all 19 collections under the family-owned and run Max Mara Group and one that has stood the test of time.

Max Mara has come to stand for clean-cut tailoring with a modern edge, and in the words of Maria Giulia Maramotti, director of retail for North America and granddaughter of Max Mara founder Achille Maramotti is “timeless, luxury, quality.”

The Max Mara woman is “an independent, strong, and creative woman. She dresses for herself, consistent with her lifestyle and her body,” she said, “I also think she loves fashion, but is not a fashionista—has her own style and picks her clothes according to that.”

Maramotti told Epoch Times that she sees it as a strength that the brand has stayed true to its DNA through years. Starting off as an Italian company with the majority of its market in Italy, it has grown to become a global brand. Now she believes that the major challenge is to maintain the brand’s DNA yet be able to address the needs of different consumers.

Treating the names of the designers who work for the company with discretion has also served to strengthen the brand, rather than exalting a certain star designer’s unique creativity. Over the years, designers who have collaborated with the Max Mara Group have included Karl Lagerfeld, Anne-Marie Beretta, Narciso Rodriguez, and the Proenza Schouler duo among others, but their identities and roles were not disclosed to customers at the time of their collaborations.

The company has also been quietly forging a global identity that supports visual and performing arts projects. In September this year it announced its partnership with the Whitney Museum of American Art to sponsor the opening party of the Whitney Museum in downtown New York City this upcoming Spring 2015.

In 2005 the company also established the Max Mara Art Prize for Women in collaboration with the Whitechapel Gallery. The biannual award is the only visual art prize for women in the U.K. that promotes female artists working across any medium who have not previously had a solo survey exhibition.

The following year, in 2006, Max Mara also launched the Women In Film Max Mara Face of the Future Award®, inaugurated at the Women In Film’s 2006 Crystal + Lucy Awards®. The award is given to an actress who is experiencing a turning point in her career through her work in the film and television industries, who has also contributed to the community at large. The award not only recognizes her achievements, but also her sense of style.

But ultimately, all of the company’s initiatives depend on the success of their seasonal collections.

The current Max Mara Fall/Winter 2015 collection lives up to the edgy feminine sharp-chic. It brings together Anglo-Scottish elements and materials such as tweeds, Prince of Wales checks, herringbones, Donegals and plaids, but the look is unmistakably Max Mara.

There are no trousers, only calf length pencil skirts worn with sheer seamed stocking. A pencil dress in a salt and pepper Donegal tweed is both alluring and intriguing—it takes a minute to register the unusual look achieved by the use of what is traditionally coat fabric in a dress with a low V-neck.

The collection also includes the iconic Max Mara wrap coat and the trench coat reinterpreted and cinched in at the waist with a man’s tie.

The color palette is largely in neutrals allowing textural interest to dominate throughout the collection. But there is a touch of glamour, a gold crocodile print shirt or skirt and gold booties done the Max Mara way—edgy.