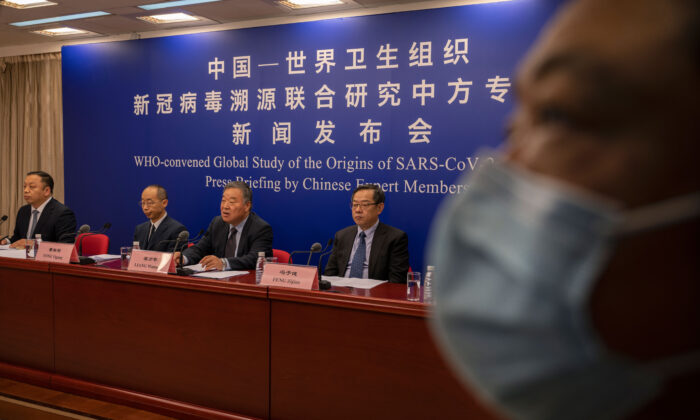 Head of the Expert Group on COVID Response at China's National Health Commission Liang Wannian, center, answers a question as he sits with colleagues Feng Zijian, right, Tong Yigan, second left, at a press conference addressing the World Health Organization (WHO) report on the origins of SARS-CoV-2, at the National Health Committee on March 31, 2021 in Beijing, China. (Kevin Frayer/Getty Images)
Viewpoints

The WHO’s Disappointing COVID-19 Investigation; US Must Hold CCP Accountable

After a long wait, the World Health Organization (WHO) has finally released its lengthy investigation on the origin of the Coronavirus in China. More than a year after the start of the pandemic, the investigation provides little more than disappointing proof of the Chinese government’s unwillingness to offer transparency. Instead of answering the world’s questions, the report has raised more concern and confusion on the origin of COVID-19.

Health experts and governments are collectively criticizing the disappointing investigation for providing little valuable information and evidence on what really caused the spread of the deadly virus that has since killed 2.8 million people worldwide.

Even the WHO Director-General, Dr. Tedros Adhanom Ghebreyesus, often teased as “Secretary Ted” for his leniency with the Chinese Communist Party (CCP), publicly stated his dissatisfaction with the findings. “I do not believe that this assessment was extensive enough. Further data and studies will be needed to reach more robust conclusions.”

The United States joined 14 national governments in issuing an official joint statement, voicing “shared concerns that the international expert study on the source of the SARS-CoV-2 virus was significantly delayed and lacked access to complete, original data, and samples.

The massive 124-page report was written by a team of 34 scientists, all specifically filtered for this investigation, by the WHO and Chinese regime. The report loosely addresses four key theories about the origin of the COVID-19 spread in Wuhan, China.

The first finding determines the origin of the virus was transmission to humans from bats, through an intermediary host, as “likely.”

The second finding claims the “most likely” origin of the virus was directly from bats to humans.

The third theory validates a claim pushed by Beijing that the virus was transmitted in China through the import of frozen foods, as “possible.”

The final theory of the virus leaking from a lab in Wuhan, China is labeled in the report as “extremely unlikely” with little data to back up its dismissal.

The glaring problem with the report is it offers little valuable information for clearing up the shrouded origin of one of the deadliest global pandemics of our lifetimes. This “official investigation” presented by the World Health Organization uses so-called scientific experts to claim that frozen food is a more likely source of COVID-19 than a leak from a nearby biolab. This dubious report is a clear echo of subjective CCP claims and holds absolutely no credibility for a world struggling to pinpoint the origin of a global pandemic to prevent further catastrophes.

The WHO Director-General revealed in his remarks that investigators who went to China to investigate the epidemic encountered difficulties in obtaining raw data and access to labs.

The Chinese Communist government repeatedly denied offers of foreign help at the start of its domestic outbreak. They delayed WHO scientists from entering Wuhan for an entire year after the first reported outbreak. When finally allowed into Wuhan, the researchers were forced to wait for days. The data was reported to be secondhand from Chinese scientists and interviews were sourced from Chinese government officials and lab employees.

Scientists selected to conduct the investigations had to be handpicked by China and the WHO. Half of the scientists on the investigation team were directly selected by the Chinese government, giving them massive influence over the final conclusions and results. Many of the experts have direct ties to the Wuhan Virology Lab and the Chinese regime, such as Peter Daszak, leader of EcoHealth Alliance. The very same non-profit that received millions to conduct research at the Wuhan Virology Lab.

A key problem in the WHO report that has been seriously questioned by experts is the allegation that the chance that the virus originated from the Wuhan laboratory is “extremely low” without much support via real data. Most of the information comes second hand through the statements made by researchers and CCP officials.

The allegations that the Wuhan virology lab started the virus are not hearsay and deserve a fair investigation. Wuhan P4 virus laboratory is located ten kilometers away from the South China Seafood Market. As soon as the COVID-19 pandemic started, it was regarded as a primary suspect as an origin.

More and more expert opinions and various analytical articles pointed to the Wuhan Virus Research Institute as the source of the new coronavirus, believing that the leak caused the spread of the epidemic.

The Washington Post reports that as early as January 2018, members of the U.S. Embassy visited the Wuhan Virology Lab. After their visit, they warned the U.S. government of the lab’s work on bat coronaviruses and of human transmission risk through a new SARS-like pandemic. The same report by U.S. Embassy representatives also warned that sufficient safety measures were not taken in the lab where the bat coronavirus was being studied.

The U.S. government also discovered evidence that as early as the fall of 2019, several researchers inside the Wuhan Virology Lab became sick, with symptoms reminiscent of COVID-19.

The image shows that the external traffic around the laboratory was completely suspended from October 14th to 19th, and roadblocks were suspected to be erected to prohibit traffic and people from approaching the Wuhan P4 laboratory.

After the outbreak of the CCP virus, also known as the novel Coronavirus, the CCP sent a special military biochemical defense force to take over the laboratory and collected all experimental data in the laboratory. Xi Jinping then subsequently passed China’s first “Biosafety Law.”

All these incongruities and questions about this laboratory were dismissed by the two lines in the 124-page report, simply claiming that the Wuhan Virology Labs were “well-managed, with a staff health monitoring programme.”

The actions taken by the Chinese government in its handling of COVID-19 are too suspect to be ignored. COVID-19’s impact on the entire world is too severe for its origin to be investigated so lightly. The Chinese government delayed investigations into the origin of the virus for months and made active efforts to prevent the spread of information about the virus.

Let’s not forget the arrest of Dr. Li Wenliang, the doctor who died from COVID-19 after trying to publicly warn the world about the virus. Numerous journalists, such as Chen Qiushi and Fan Bing, were threatened by police and went missing after truthfully reporting about the start of the CCP in Wuhan.

The WHO is beholden to the whims of the Chinese government. Without access to real data and the virology labs, they are forced to regurgitate claims made by the CCP, with little evidence to support them. These irresponsible actions hurt the entire world, as demonstrated by the pandemic.

While the WHO is responsible for conducting these investigations on a global scale, we should not confuse who must be held responsible for the lack of transparency and cooperation, the Chinese regime.

There has only been one government in the world that has truly strived to hold the CCP regime seriously accountable for its wrongdoings, and that was the Trump administration.

The Trump administration’s pursuit of accountability for the CCP was not to pursue the scientific origin of the virus in mainland China, but to hold it responsible for concealing the pandemic from the world in the early stages of the outbreak and deliberately misleading the international community.

Now, we have a new administration, and the issue at hand is investigating the origin of the virus. Truly investigating the Chinese regime’s responsibility for the origin is even more threatening to the CCP, because for now, the emergence of the COVID-19 pandemic is still widely accepted as a random viral spread.

Identifying the hand that directly permitted COVID-19 to spread through mishandling is a direct threat to the legitimacy of the CCP’s authoritarian and totalitarian system. This is what scares the CCP more than anything else.

Secretary of State Blinken must continue Pompeo’s plan to hold the CCP responsible for its actions. There is far too much at stake.