WHO Fumbles ‘Pandemic Preparedness’ for Coronavirus 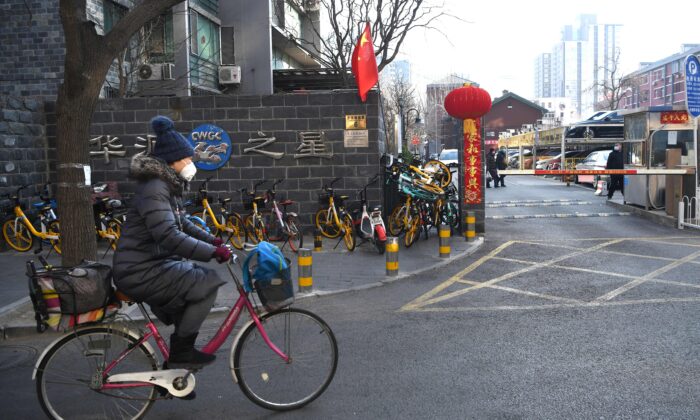 A cyclist wearing a facemask passes bicycles (C) piled up as a barricade to block a side entrance to a residential compound, forcing visitors to register with guards at the main entrance, in Beijing on Jan. 30, 2020. Noel Celis/AFP via Getty Images

The coronavirus test ran on Oct. 18, 2019. The goal of a global health consortium was to see what it could learn from a computer model simulating an outbreak that rippled out of South America.

The consortium, made up of John Hopkins University, the World Economic Forum, and the Bill and Melinda Gates Foundation, named the Event 201 as the next “big one” after the 200 epidemics the World Health Organization (WHO) monitors each year. What did they find in the analysis of the data?

Governments and health agencies are nowhere near prepared to slow down, let alone contain mass infections due to a novel coronavirus pandemic.

Lo and behold, in a quirk of absurd timing, a new coronavirus outbreak took root in Wuhan, China, shortly after or in parallel with the Event 201 conference in early- to mid-November. That forced John Hopkins University to issue a statement, as many speculated the consortium was somehow involved with the Wuhan flu.

The statement read, in part:

“Recently, the Center for Health Security has received questions about whether that pandemic exercise predicted the current novel coronavirus outbreak in China. To be clear, the Center for Health Security and partners did not make a prediction during our tabletop exercise. For the scenario, we modeled a fictional coronavirus pandemic, but we explicitly stated that it was not a prediction.”

Such speculation emerged from an October article by the Canadian Broadcasting Corporation (CBC), titled “Canadian government scientist under investigation trained staff at Level 4 lab in China.”

The Level 4 Lab resides within the Wuhan Institute of Virology at the Chinese Academy of Science, located 20 miles from the origin of the coronavirus outbreak.

“A Canadian government scientist at the National Microbiology Lab in Winnipeg made at least five trips to China in 2017-18, including one to train scientists and technicians at China’s newly certified Level 4 lab, which does research with the most deadly pathogens, according to travel documents obtained by CBC News.

“Xiangguo Qiu—who was escorted out of the Winnipeg lab in July amid an RCMP investigation into what’s being described by Public Health Agency of Canada as a possible ‘policy breach’—was invited to go to the Wuhan National Biosafety Laboratory of the Chinese Academy of Sciences twice a year for two years, for up to two weeks each time.”

What makes 2019-nCoV so terrifying is that it operates differently than any strain that came before. Scientists discovered that the novel coronavirus can spread in the first phase of a double latency period. First, incubation, then followed by the emergence of flu-like symptoms. In such stealth mode, those infected show no signs of fever, cough, or the chills for the first seven to 10 days. Unwittingly, they can spread the disease to people they come in contact with their daily lives, work, or travel.

With the first cases appearing in Wuhan in early December, meaning the silent outbreak began undetected a few weeks earlier, China didn’t notify the WHO until later that month, with an official announcement on the 31st. That gap, stretching back to mid-November, enabled the virus to spread far and wide across the Chinese industrial city of 11 million residents. In a stunning confession, the Wuhan City mayor admitted that as many as 5 million migrants and residents had gone home for Chinese New Year.

Like in the Event 201 simulation, the Chinese Communist Party lost the opportunity to contain the virus. So, too, did the WHO, with its admission that “human error” caused the global health agency to downplay the severity of the virus. In the first half of January, the Chinese began constructing thousands of hospital beds in record time. But that’s not the same as dealing with the disease outbreak.

The next gap to medically stem the tsunami of coronavirus infections is a long one: Fast-track development of a vaccine would take six to eight months if all things go well. But Novartis CEO Vas Narasimhan told CNBC that developing a coronavirus vaccine will “take over one year” and that “we need to really use epidemiological controls to really get this situation in a better place.”

With such a long lead time to produce a vaccine, while the virus spreads exponentially, the plan to immunize couldn’t possibly work in 2020.

Grounded by this reality, China is now examining 30 off-the-shelf drugs to see what punch they might bring by treating the “host,” and not trying to prevent a disease with a vaccine that may or may not work.

What can people do in the meantime? The WHO, the Centers for Disease Control and Prevention (CDC), and the Gates Foundation admitted by their own actions and statements to be woefully unprepared for a pandemic.

This very scenario—a global pandemic with a vaccine development timeline that would stretch beyond a year—has been seen twice before by Dr. David S. Fedson. First, with the 2003 severe acute respiratory syndrome (SARS) outbreak in Hong Kong, and then in the 2014 Ebola epidemic in West Africa.

In the latter, Fedson ran into the “industry” gauntlet of the WHO and CDC, with their single-minded, vaccine-only focus on preventing disease through immunization. The problem he realized then, as China is discovering now and what the Event 201 consortium proved last autumn, vaccines are not a cure-all. They take time to develop, test, refine, mass-produce, and then distribute. And that’s if they get the vaccine right and the virus doesn’t mutate significantly during production.

Fedson is also aware that the WHO and CDC marketing terms “pandemic preparedness” and “global health security” aren’t a solution to a crisis. They do nothing to address the underlying problem or the threat of a deadly virus. When people get infected, whether from Ebola or a coronavirus, time is rarely on the side of those who are gravely ill and dying.

Why, in the 21st century, do the health care gatekeepers continue to rely on slow, ineffective treatments when epidemics occur? Why don’t they possess a pandemic rapid response program?

The CDC does have a strategic national stockpile of vaccines, antiviral drugs, antibiotics, and medicine stored in secret locations around the United States. But why doesn’t that stockpile include vitamin C, glutathione, and other medications that would boost one’s immune system and block the virus from attacking?

Fedson explained why, in a telephone interview from France.

He said: “The U.S. medical authorities are not in agreement. First, with its [WHO’s] inexorable march to make an Ebola vaccine since 2002, while ignoring all other less costly and more effective non-vaccine treatments. This pattern of ignoring existing technologies and medicines was repeated for Zika.

“In Congo, fighting the frontlines of Ebola today, healthcare workers need, sensibly used, 260,000 vaccines in refrigerated storage at temperatures as low as -60o F in a hot climate. The logistics for distribution in remote areas have huge costs with vaccine contracts, while the WHO sets up surveillance networks that add even more super expensive costs for such a program.

“Congress budgeted $5 billion for Ebola response with ICU specialized units and biosafety teams in Africa. International organizations, the Gates Foundation, Welcome Trust, the CDC burn through tens of millions of dollars in such responses. They see a gold mine to leverage. But for generic treatments, the WHO isn’t interested in advocating research, as it would jeopardize their funding mechanisms to raise capital for future emergencies.”

In seeing how the 2014 Ebola outbreak killed more than 11,000 people, with mortality as high as 50 percent, Fedson saw the “patients who die of Ebola had elevated levels of proinflammatory cytokines (small proteins responsible for cell signaling).” He had seen the same issue in people with sepsis and arrived at what a cardiovascular physician would do to thwart sepsis: Use the common drugs of statins and angiotensin receptor blockers.

“This treatment targets the host. People survive instead of die as the person’s own immune system can respond. Doctors can take these medicines off the shelf; know they are safe to use in patients. It will allow those sick to shore up a host response with the biology of evolution to fight the next outbreak. Children survive a flu epidemic more than adults because it comes down to energy metabolism. Any pediatrician can build upon that observation. This treatment is more benign with better odds at survival.”

Fedson is a lifelong clinician who served as clinical associate in the Laboratory of Clinical Investigation at the National Institutes of Health and Chief Medical Resident at the University of Chicago, was a member of the U.S. Public Health Service’s Immunization Practices Advisory Committee (ACIP) (1984–88), served on the Task Force on Adult Immunization of the American College of Physicians (1982–90), became Director of Medical Affairs for Aventis Pasteur MSD in Lyon, France (1995), and was a graduate of Yale Medical School (1965).

The frustration in his voice lingered with each breath.

Over a distinguished career, with his research establishing the “epidemiologic rationale for hospital-based influenza and pneumococcal immunization,” Fedson has seen it all.

“Evolution is staring us in the face in how the body’s immune system can respond if given a fighting chance. No scientist can replicate that in a lab,” he said.

So why haven’t the medical gatekeepers in the WHO, CDC, and John Hopkins University done more research on existing medicines and treatments to fight the next contagion?

For the 2020 coronavirus pandemic, millions may indeed die from the outbreak. But it won’t be the Event 201 model that haunts societies around the world. It will be the missed opportunity that will scar the collective memory when this terrible pandemic burns out.

James Grundvig is a contributor to The Epoch Times and the author of “Master Manipulator: The Explosive True Story of Fraud, Embezzlement, and Government Betrayal at the CDC.” He lives and works in New York City.

James Grundvig
James Grundvig is a former contributor to Epoch Times and the author of “Master Manipulator: The Explosive True Story of Fraud, Embezzlement and Government Betrayal at the CDC.” He lives and works in New York City.