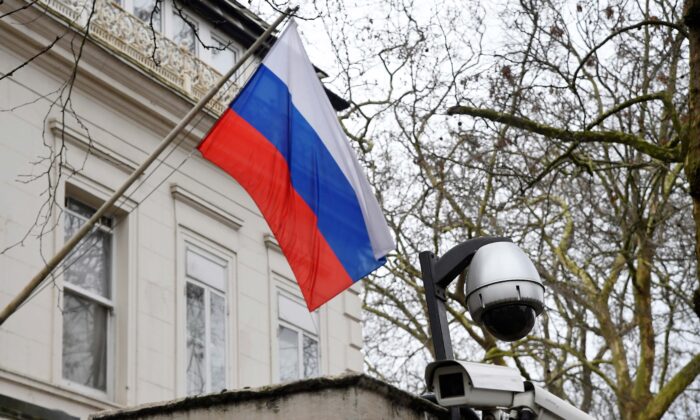 A flag flies outside the consular section of Russia's Embassy in London, on March 20, 2018. (Toby Melville/Reuters)
Viewpoints 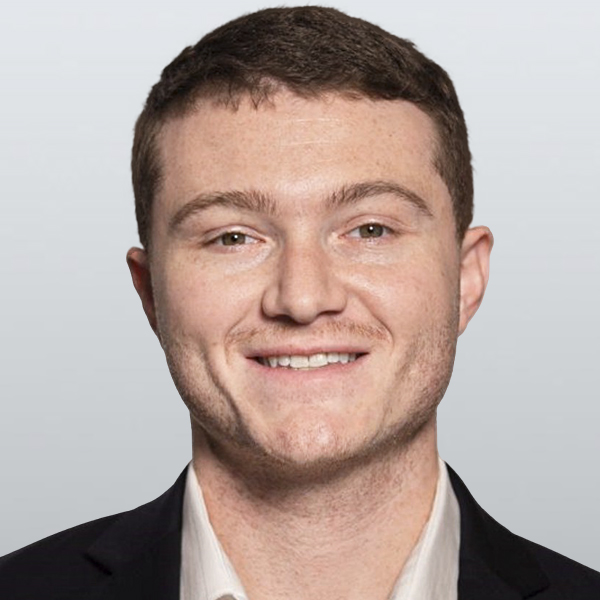 In the past month, Western nations have allied to wage an economic and technological war against the Russian government and key Russian institutions. These measures included economic sanctions on well-connected Russian oligarchs, Russian banks, and even a U.S. ban of Russian energy imports. Despite Western skepticism of Russian President Vladimir Putin and Russia’s imperialist ambitions, Western nations had previously been comfortable with some level of reliance on the now “pariah” petrol state. Both The New York Times and The Washington Post have referred to these newly implemented measures as “a new iron curtain.” The success of these financial measures has given the Western powers an opportunity to display their financial armory as still maintaining a considerable grasp of the global financial system, despite the emergence of China as an economic powerhouse.

In addition to levying an array of financial sanctions, the United States and the European Union have banned key Russian banks from SWIFT. Some European leaders have already described the SWIFT ban on select Russian banks as a “financial nuclear weapon.” Following these sanctions, three of the world’s largest payment card providers (Visa, Mastercard, and American Express) announced that they had partially suspended operations in Russia. Other mainstream American financial products like Apple Pay and Google Pay followed in the exodus from Russia. Within the past month, the Russian ruble has lost around 40 percent of its value. One expert told Newsweek that “markets are fully pricing in not just any old default, but a catastrophic one, with no possibility of restructuring in the foreseeable future.”

Russia’s pending financial catastrophe could either force Putin to withdraw from Ukraine or it could force him to double down. Either way, these options are a lose-lose scenario for the Russian Federation and the Russian people. While Putin may have incorrectly assumed that Western countries and the North Atlantic Treaty Organization (NATO) would fold, he has instead rejuvenated the Western alliance. According to The Wall Street Journal, “many around NATO expect Russia to become more belligerent and unpredictable in the near future.” The fallout from the Western isolation of Russia has demonstrated that warfare can and will be fought using the global financial system. The U.S. dollar has been the world’s primary reserve currency. With this privilege, America has been able to dominate the global financial system, and maintaining the dollar’s status as the primary reserve currency has been the key to the United States’ control.

The financial system has long been viewed as an “economic chokepoint” by governments seeking to crack down on specific organizations, individuals, or activities. Whether a government wants to launch an investigation into a foreign adversary or a law-breaking citizen, law enforcement will often work with financial institutions to assemble its case. Under specific circumstances, law enforcement may not be required to issue a warrant to the financial institution.

Canadian Prime Minister Justin Trudeau recently provided a case study in how to weaponize the financial system against domestic opponents. On March 3, I argued that the financial system was weaponized against Trudeau’s political opponents. Thousands of protesters began crowding Canadian cities, demanding an end to the prime minister’s COVID-19 policies; Trudeau chose not to face the protesters’ claims and instead authorized the Financial Transactions and Reports Analysis Centre of Canada, under an Emergencies Act declaration, to require crowdfunding platforms and payment service providers to disclose the financials of individuals involved with the protest. Multiple Canadian Broadcasting Corporation hosts and guests suggested that “Russian actors were behind the protests.” Canadian government officials referred to economic penalties against its own citizens as “financial sanctions,” a term usually used within the foreign policy context. In effect, Trudeau’s government branded his political opponents terrorists.

In the United States, many voices within the corporate press have often branded those who object to the official government narrative “foreign agents,” “agents of the Kremlin,” or “treasonous.” This became a common practice during the Trump administration, and it continues to this day. Within the past few weeks, individuals like legal scholar Laurence Tribe, former MSNBC host Keith Olbermann, and “The View” cohost Ana Navarro have referred to Fox News’ Tucker Carlson as a Russian propagandist. Ana Navarro has already called on the Department of Justice (DOJ) to investigate “people who are Russian propagandists and shilling for Putin.” Navarro continued, “If you are a foreign asset to a dictator, it should be investigated.”

Former congresswoman Tulsi Gabbard has been subject to similarly egregious accusations. Former U.S. secretary of state Hillary Clinton went so far as to suggest that Russians were “grooming” Gabbard. CNN Politics’ Chris Cillizza questioned “Gabbard’s real motives … toward Russia.” Over the weekend, Sen. Mitt Romney (R-Utah) accused her of spreading “treasonous lies” for questioning the prevailing narrative around Ukrainian bioresearch labs. The writing on the wall is becoming increasingly clear. Those who do not conform to the government’s preferred narrative may be smeared as agents of the Kremlin and traitors. No so-called democratic nation can pretend to cherish “freedom of speech” while simultaneously cracking down on opponents of its policies.

Beginning in 2017, the DOJ began “using a once-obscure law, most commonly used today to require the registration of those who lobby in the United States on behalf of foreign governments, to target foreign-based anonymous disinformation actors on social media.” In court, the DOJ argued that “foreign online disinformation actors … and perhaps those Americans acting at the behest of foreign disinformation organizations, have a legal duty to register their activities with the department.” In other words, it is not accidental that mainstream corporate media outlets have accused Tucker Carlson and Tulsi Gabbard, among others, of being “foreign agents.”

Following the DOJ’s interpretation of existing law, we see that the logical next step is for law enforcement to begin investigating those accused of being “Russian assets.” Given the current political climate, it is entirely possible that the DOJ will begin investigating those accused of being “foreign agents.” These investigations will likely be fruitless, but they will send a message to those in opposition to the prevailing narrative. The Russian State Duma has similarly introduced an amendment to its foreign agent rules, which Lawfare describes as “primarily aimed at intimidating Russians.” The DOJ understands that the Foreign Agents Registration Act can similarly be enforced selectively, in alignment with national interests.

The near-complete isolation of Russia from the broader West has demonstrated the continued strength of Western influence in global affairs. Western nations will attempt to similarly isolate those accused of being “Russian agents” within their own borders. Whether these governments launch investigations into these individuals or entities has yet to be seen, but the groundwork is being paved through the corporate media’s coverage. The message is clear: anyone who questions the government’s preferred narrative or public policy cannot simply do so in good faith; he must be a Russian asset.

Mitch Nemeth
Follow
Mitchell Nemeth is a Risk Management and Compliance professional in Atlanta, Georgia. He holds a Master in the Study of Law from the University of Georgia Law School, and he has a BBA in Finance from the University of Georgia. His work has been featured at the Foundation for Economic Education, RealClearMarkets, Merion West, Medium, and Mises.org.