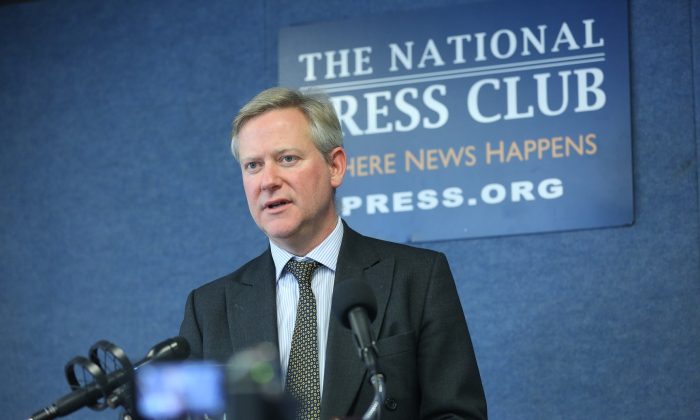 The West Needs to Come to Terms With the Disaster of China’s Entry Into the WTO: Expert

WASHINGTON—When it came time for China to join the World Trade Organization, the West left the door unlocked, and China pushed it open. China’s joining the WTO hasn’t induced political changes as expected, but has cemented the Communist Party in power. It set the backdrop for the 2008 financial crisis, and leaves the West with a superpower global rival antithetical to its values.

These are some of the arguments of Stewart Paterson, who came to Washington to launch his newly published book, “China, Trade and Power: Why the West’s Economic Engagement Has Failed,” on Oct. 23 at the National Press Club.

The Failure of Economic Engagement

Paterson said that while economic engagement was supposed to induce political change in China, the reality is that it is threatening the West’s political system.

“China flooded global markets with cheap labor and tradable goods and accentuated existing divides in Western society. Corporate profitability was enhanced at the expense of labor and wages.”

China’s WTO accession allowed 750 million workers, whose wages were only 10 percent of the “first world” workforce, to enter the global trade system.

Paterson said the policy response of Western central banks to deflationary pressure was to keep interest rates low. This eroded the benefits to Western populations of trade and exacerbated the situation.

It also set the backdrop for the 2008 financial crisis as the Fed tried to fight deflation with low rates.

And the legacy of all this, Paterson said, is “debt, financial fragility, inequality, low participation, and disillusionment. “

Here are some of the main impacts on China.

The Triumph of Mercantilist China

Paterson said the real issue was economic engagement with China did not bring change to the structure of the Chinese economy in terms of market-driven capital allocation, exchange rate flexibility, reform of state-owned enterprises, respect for intellectual property, fair and unbiased competition policies, the even provision of information, the rule of law, and a market economy.

As a matter of fact, China’s export success obviated the need for deep structural reform of the economy and was a triumph of mercantilist China.

Turning the World Upside Down

After China’s accession to WTO, corporate profits in the West rose from 5.4 percent of GDP to 9.2 percent in the last 20 years. But wages dropped from 46 percent of the GDP to 43.6 percent. Western labor has suffered the longest period of income stagnation, and the longest decline in real median incomes since World War II.

According to Paterson, China’s economic rise has resulted in a potential shift of political allegiances among third world countries. Missteps in the West enhance the appeal of a Chinese alternative as a potential customer, investor, and foil. Beijing competes with Washington for “hearts, minds, and wallets.”

In conclusion, Paterson said that deep market-oriented economic reform in China was avoided by export success. Rising living standards enhanced the CCP’s legitimacy. China has gained an oligopolistic role in manufacturing and as a purchaser of commodities.

In the meantime, Beijing’s economic model is being held up as an alternative to Western liberalism, and the West has a rival that is antithetical to its value system.

To undo some of the dire consequences, Paterson believes the first thing to be done is to “have proper understanding of how naive we were in the first place, and the depth of the impact that it has on our societies.”

And the next thing is to decide “where we want to end up in terms of our relationship with China.”

Paterson thinks that President Donald Trump’s tariffs “have certainly got the attention of the Chinese, and have the potential to inflict economic pain on the Chinese.”

“Where the administration goes from here depends on what their aims are,” Paterson said. “The tariffs are already having an impact in terms of foreign direct investment flows being channeled towards other Southeast Asian countries as opposed to China. Multinationals also are making contingency plans about their supply chain. ”

However, tariffs alone are not enough “to tackle the fundamental problems of how you engage economically with a regime which is ideologically opposed to your own in a way that doesn’t cross contaminate your own economy and produce unjust outcomes.”

As to the reports that Trump has threatened to withdraw from WTO, Paterson thinks that withdrawing from WTO without something else being in place to replace it would “probably be a mistake.”

“But WTO was not set up to try to manage trade between market economies and economies that were planned by totalitarians who were antithetical to the idea of market forces.”

“WTO is proven not fit for the purpose, in terms of the role it is asked to do. But that was not the role for which it was set up.”

Going forward, Paterson believes that “there will be very limited level of economic engagement between China and Western countries in the future, and it will become more limited, because I failed to see how the CCP is going to agree to something that would be acceptable to us.”