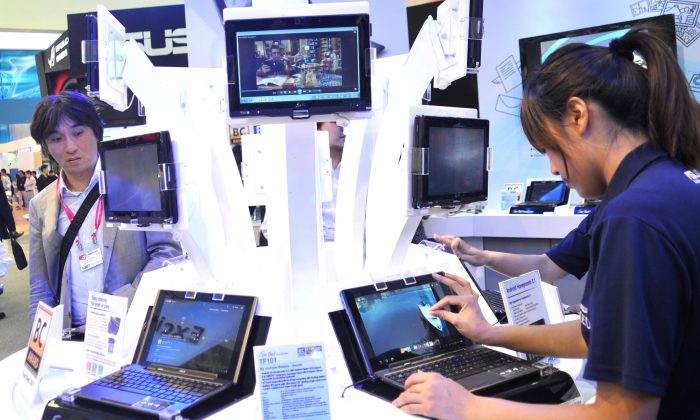 Exhibitors from US tech giant Intel at a booth at Computex Taipei, Asia's biggest information technology and communications trade fair, on May 31, 2011. (Patrick Lin/AFP/Getty Images)
Technology

The West Must Prepare for Technological Decoupling from China: Experts

The technological basis of information systems throughout the West and China are increasingly decoupling, becoming separate and mutually unintelligible, according to a new report. Western nations will have to do more to prepare for the consequences, according to experts.

“Cybersecurity collaboration among like-minded governments and private sector companies in the West has to be more than just simply linking [security certificates] when crises happen,” said former Director of National Intelligence Dennis Blair.

“Unfortunately, that’s the reality of what our international cooperation is any many sectors at this time.”

Blair said that China and the West were diverging into two distinct “technospheres,” each with its own technologies, policies, and practices.

In one sphere, he said, China and Russia were developing insulated and nationally unique information systems, whereas in Western-style democratic nations there was a push towards developing more universally valid, or interoperable, systems.

The schism would have immense implications for cybersecurity as decoupling accelerated, he said.

Blair delivered the comments during a recent conversation with the Center for Strategic and International Studies, a security-focused think tank following the publication of a CSIS report on the issue of decoupling.

That report found that China had become a serious contender for technological dominance throughout the world, and that its privacy and security practices could deeply alter the information landscape should its model be more widely adopted throughout the world.

“In competition with Western nations, China has led in driving digital technology advancements across the globe,” the report said.

“The rise of Chinese technological prowess comes at a time of rising geopolitical tensions made worse by growing Chinese power and aspirations, an increasingly divided Europe, and a United States in political turmoil.”

The situation has led to something of a battle for international influence in developing nations, with the West struggling to promote information technology systems abroad that will be compatible with those being created in its market.

“China is consciously seeking to co-opt nonaligned nations around the globe to align with its technosphere,” the report said. “Western nations have a challenge and a choice regarding collaboration as they seek to engage with nonaligned nations in this realm.”

This state of affairs is increasingly resulted in what Blair called a “segmented space,” wherein nations throughout the world are operating technologies in a disjointed way that impedes the flow of data between nations.

To this end, the report found that Western nations were largely in agreement about the values needed to drive technological development, but that they lacked the top-down coordination commanded by the Chinese Communist Party’s authoritarian model.

“The Chinese-led technosphere emerged from the global technosphere, a primarily Western-driven ecosystem with limited coordination but shared values,” the report said. “As China separated, it created a top-down model for providing data and information controls, regulations, and policies.”

“Many countries are caught between both spheres or remain unaligned to either.”

The report highlighted that Russia, Venezuela, and numerous countries throughout Africa were adopting the Chinese model.

The report found that there were some actions the West could take to counter the growth of the Chinese model.

Overall, it recommended strengthening transparency, as well as implementing more severe consequences for violations of international rules and norms; Promoting a global standard for data security and connectivity; And fostering an international environment more receptive to Western leadership in critical technologies.

To that end, the report said that Western nations would need to come together to establish and enforce common standards for its technosphere.

“While [CSIS] inherently believes in the value of a global, open, interconnected cyberspace, geopolitical tensions will likely continue to drive a divergence of the two technospheres,” the report said. “Western nations should act now to mitigate the growing cybersecurity risks posed by this decoupling.”

“Public and private leaders should join together, understand the challenge, and commit to the long-term actions necessary to keep cyberspace a vibrant and productive realm.”