3
Gas Prices Jump 33 Cents in Past 2 Weeks, Some Analysts See $6 per Gallon by August
15hr
sharecomments 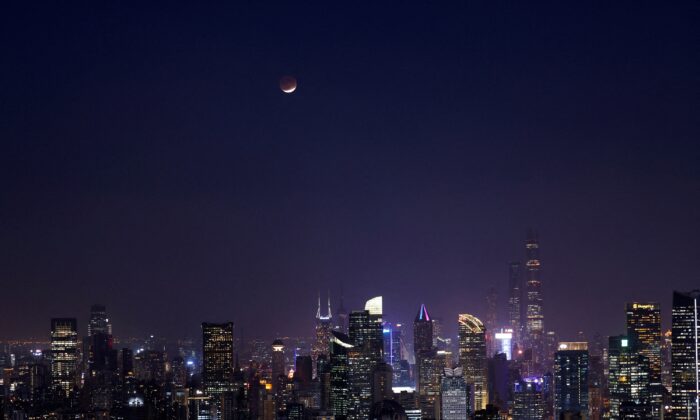 Lunar eclipse rises over the skyline of Shanghai, in China, on Nov. 19, 2021. (Aly Song/Reuters)
Thinking About China

The Weakness of China’s Economic System

Under Chinese leader Xi Jinping, China has hardened its centrally directed approach to economics. Without siding with Xi, many Western media outlets and businesspeople have praised this centralized approach as superior to America’s seemingly chaotic market-oriented system. Some have even forecast the ultimate triumph of the Chinese model.

But for all this praise, the seeming strengths described by many are really weaknesses. This and subsequent contributions to this space will explain what Beijing and many of Western media outlets and businesspeople have missed.

A recent white paper from the Asia Society Center on U.S.-China Relations and the UC San Diego School of Global Policy and Strategy’s 21st Century China Center frames the issues well. It describes three essential elements to China’s economic system. First is Beijing’s control of the economy through large-scale interventions to move toward the planners’ preferred goals. The second element is an openness to foreign investments so long as they serve the developmental goals identified by Beijing’s planners. The third element is the marshaling of China’s financial resources to serve these centrally determined goals.

This highly concentrated and purposeful approach often impresses visiting journalists, government officials, and businesspeople. The planners decide, for instance, that China will have high-speed rail. These visitors are awed by powerful locomotives set on an impressive array of rails going in all directions from an urban center. Everything looks so much more efficient, clean, and organized than in the West. Port facilities look larger than life. Whole cities rise seemingly overnight in what were once fields, replete with rows of apartment blocks and urban transport systems.

Journalists and businesspeople observing all this come home and look disapprovingly of the seeming inability of democratic processes to decide on an economic direction, much less conjure the means to pursue it. They look disapprovingly on the high metabolism of the market-based economy in which ideas and firms rise and fall, and fail without any overall direction or guidance.

But for all the awe China’s approach creates in some, that country’s system is less efficient than it seems and extremely wasteful. The problem is that not even China’s planners can see the future. They choose directions that seem highly appropriate on the morning when they are announced—artificial intelligence, for instance, or electric vehicles. They choose the firms, usually state-owned, to pursue those directions. In one decision, then, planners settle not only on the economy’s major goals but also the technologies, practices, and organizations that will achieve them.

That is a lot of crystal ball gazing. After all, what seems on the mark today often becomes passé in relatively short order, while the applied technologies become outdated that much faster. But even as such facts become clear, Beijing, once its plan is set, makes few, if any midcourse corrections, and those it does make are seldom complete and often implemented late in the process.

And such common mistakes create great waste. The Evergrande fiasco is a case in point. The company ran up huge debts not because its management was flamboyant, which it was, and not because lenders were less than prudent, which they were. Evergrande was able to run up huge debts because Beijing emphasized housing for years. In concert with Evergrande and other developers, Beijing and local governments raised cities out of nothing and clearly did so with little reference into what Chinese people wanted or where they wanted to live. Now it seems that 20 percent of China’s housing stock is unoccupied. Even if China now razes these excess structures, the debts will remain. Evergrande’s debt overhang is a part of this more general picture. Nor is housing the only area where central planning has missed the mark and created great waste.

There are for instance rail links to nowhere and roads that serve few. It speaks to how frequently this approach has missed the mark and why overall debt in China—both public and private—now exceeds 275 percent of the nation’s gross domestic product (GDP), much of it connected to planned projects that are unable to discharge their financial obligations.

Of course, market economies have no special ability to see the future either. Their efforts create plenty of mistakes and waste. Markets, however, have two distinct advantages over China’s centralized approach.

First, they seldom marshal national economic and financial resources as thoroughly as China’s approach does. Mistakes accordingly occur on a smaller, less wasteful scale than in China. The few times America has suffered a scale of waste comparable to China’s almost always has resulted from a concerted government push, as for instance when Washington pressured banks to lend mortgage money to lesser credits, fostering the dubious financial practices and overbuilding that culminated in the 2008–09 financial crisis.

The second advantage of market systems is that they embrace an array of participants, each of which makes efforts to capture future needs in different ways. Most miss the mark and fail. But those that hit the mark succeed wonderfully, enriching their investors as well as the whole economy. This diverse approach, though much less organized than China’s centralized system, is much more likely than is China’s concentrated effort to hit on the elusive future need.

China’s openness to foreign investors would seem to be a way for its system to co-opt the advantages of more diverse market economies. Especially coupled with Beijing’s insistence that foreign investors share their technologies and business secrets with a Chinese partner, the approach does open China to others’ innovations. But such coercive technology transfers also ensure that China at best will be taking today’s and more likely yesterday’s technology, both of which, given the speed at which technology changes, will soon be superseded by something new. This reliance on copying or what is effectively theft is the “innovative” approach of a less developed economy.

None of this is to discount what China has accomplished in the past few decades. Nor is there any attempt here to ignore China’s apparent strengths and advantages. The country has a large, intelligent, well-educated, and disciplined population, what for any economy is a jewel of infinite worth. It has natural and geographic resources, and an impressive national spirit. But recognizing all this should not blind people—Chinese and foreign alike—to the weaknesses implicit in China’s centralized, top-down directed system or the dangers to China implicit in Xi’s seeming determination to harden it.