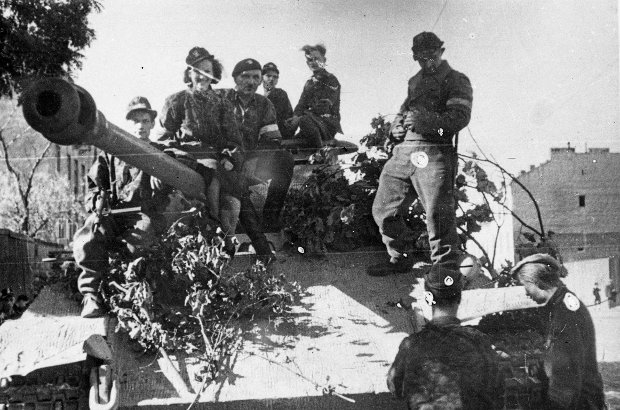 The Warsaw Uprising at 75: Why ‘Almost Forgotten’?

Writing about the 75th anniversary of the Warsaw Uprising on July 31 in The Wall Street Journal, Bard College history professor Sean McMeekin makes the point that the “heroic yet doomed” battle against Nazi occupation is “almost forgotten in the West.”

“Why, then, is this shattering episode in European history almost forgotten in the West? Perhaps because the battle for Warsaw does not have a happy ending. Germany’s eventual defeat did not mark the liberation of Poles, but the beginning of another brutal occupation by the Communists. This unsettles the narrative of World War II as a ‘good war’ and looms large over Polish and European politics to this day.”

Given how much I love to unsettle the narrative of World War II as a “good war,” I will mention another reason for Allied amnesia: the Allied role in ensuring the battle of Warsaw ended in Poland’s “brutal occupation by communists.”

In the course of his overview, McMeekin points to the rotten core of the relationship between the U.S. and British democracies on the one hand and the totalitarian Soviet Union on the other. Winston Churchill and Franklin D. Roosevelt were “desperate … to keep Stalin happy,” he notes, for example, when it came to amplifying Stalin’s lies about Nazi culpability in what was really a Soviet mass atrocity, the Katyn Forest massacre of 1940. Four years later in Warsaw, “Stalin saw no need to change course.” He also saw no need to deploy his Red Army to save Polish anti-Nazis who were also anti-communists.

Given Stalin’s plans for a communist Poland, he had every reason to make sure that as many as possible were annihilated. Appallingly, his Western allies didn’t get in his way.

“Despite broadcasting messages in late July 1944 encouraging Warsaw residents to rise up against the German occupiers, Soviet forces did not stir to help them. Though the Red Army was positioned right across the Vistula River outside Warsaw and could have intervened, Stalin was happy to let the Germans slaughter the Polish Home Army. He saw the Polish forces as a rival to postwar Communist rule. The Germans killed as many as 16,000 insurgents alongside nearly 200,000 civilians and put Warsaw to the torch, saving Stalin the trouble.

“During the uprising, Polish, American, British and Commonwealth pilots ferried aid packets—ammunition, medicine, food, cigarettes—to the Warsaw insurgents, but Stalin did not allow them to land on Soviet air bases until mid-September. Some were even fired on by Russian antiaircraft guns. Hundreds of Allied pilots were killed. They are heroes in Poland today.”

The heroism of these pilots is uncontested. However, lest anyone assume that they were part of a robust Allied operation in support of the Poles, this wasn’t the case.

Having failed to secure Stalin’s support for “the anti-Nazis in Warsaw,” as FDR and Churchill called the Poles in their letter to Stalin (Stalin replied that they were “a handful of power-seeking criminals”), Roosevelt effectively stood down. When Churchill later suggested to FDR that Britain and the United States go forward without Stalin and supply the Poles anyway, Roosevelt replied: “I do not consider it advantageous to the long-range general war prospect for me to join you in the proposed message to Uncle Joe.”

That was August. The bloodletting continued through September into early October. Would it have an effect on the U.S. commander-in-chief? Not if Harry Hopkins could help it.

Harry Hopkins was FDR’s all-powerful top aide. He lived in the White House alongside the Roosevelts for several years during World War II and was sometimes called “co-president.” Worth noting is that Hopkins’s fealty to Stalin, set forth in detail in my book “American Betrayal,” never once prompted a single cry of “Russian collusion” in the pages of The New York Times or from the Adam Schiffs of his day.

As Herbert Romerstein and Eric Breindel recount in “Venona Secrets,” a book that nails Hopkins as a Soviet agent of influence, Hopkins met with Gen. F.L. Anderson, deputy commanding general for operations, Strategic Air Force, in Europe, on Sept. 11, 1944. Anderson told Hopkins that supplying the freedom-fighting Poles in Warsaw was a bad idea for two reasons. The first reason was the risk involved. (Far greater risks and devastating losses had not precluded supplying the Soviets, however.) The second reason was Anderson’s feeling—and this was endemic among Allied officials at that time—air drops might “jeopardize our relations with Russia,” as Romerstein and Breindel put it.

I guess that since Stalin was denying his bosom “allies” overflight rights, refusing them permission to land in Soviet territory, and actually shooting at them, they didn’t want to make Stalin mad.

The authors continue: “Hopkins agreed and said he would relay this to the president immediately. More significantly, according to Anderson, Hopkins said that he would see that any cablegrams, whether they came from Mr. Churchill or Mr. Winant [the U.S. ambassador in London] would be held in abeyance and that we would not be committed to do this job.”

Romerstein and Breindel write: “That Hopkins would admit to a visitor that he was holding back cables from President Roosevelt that came from Churchill and the U.S. ambassador in London is amazing but it indicated his incredible power.”

His incredible power to help carry out Soviet policy, that is. Not an episode for unfurling the bunting and speechifying, perhaps, but one that merits more and deeper examination. Seventy-five years of neglect is enough.