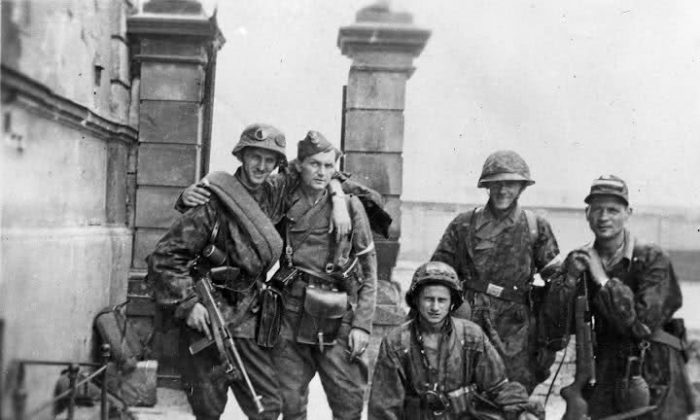 Members of the Armia Krojowa (Home Army) pose for a photo on Aug. 11, 1944, during the Warsaw Uprising. (Juliusz Bogdan Deczkowski/Public Domain)
The Dead End of Communism

The Warsaw Uprising and Poland’s Battle With Communism

In the summer of 1944, the Nazi occupation of Poland was nearing the end of its fifth year. More than one in five Poles had been killed, enslaved, or shipped off to concentration camps. The country was being incrementally destroyed to make way for Adolf Hitler’s vision of a greater German Reich. Still, hundreds of thousands of Poles continued to fight.

By August, the Soviet Red Army had managed to drive German forces off of Russian territory and take parts of Poland. Vast amounts of American and British aid, including trucks, food, and raw materials, enabled the Soviets to deploy and supply vast numbers of tanks, planes, and guns.

With an Allied victory no longer in doubt, Poland’s Armia Krajowa (Home Army) saw what it considered its best chance for success: an uprising in the Polish capital of Warsaw, timed to coincide with the arrival of the oncoming Soviet offensive.

Just days before, on July 25, Radio Moscow had called for “every Polish homestead” to “become a stronghold in the struggle against the invaders.” On July 29, Soviet tanks reached the outskirts of Warsaw and began engaging the German armored divisions there.

Starting on Aug. 1, tens of thousands of Home Army members, armed with captured German weaponry and supplies provided by the Western airlifts, seized control over Warsaw and attempted to establish radio contact with the Soviets.

But no help was forthcoming. For reasons that to this day remain classified by the Kremlin, the Soviet offensive stopped on the outskirts of Warsaw. A nearby Soviet airbase remained unused, while Western airdrops were limited to faraway locations in Italy.

Without heavy weapons or outside support, the Polish resistance stood no chance against even the weakened German occupation force. Warsaw was razed and up to 200,000 civilians died, the majority of them executed by the Nazis after the battle.

Soviet forces only restarted their offensive in January 1945, and the war ended that May.

From Hitler to Stalin

For the major Allied nations—the United States, Great Britain, and Soviet Union among them—World War II was a clear victory. Six years of aggressive conquest and mass murder by Nazi Germany and Imperial Japan were put to an end, and the Axis powers unconditionally surrendered.

But for Poland and other nations in Eastern Europe, the end of Nazi occupation and genocide brought totalitarian Soviet rule. The democratic Western allies had gone to war in 1939 because Germany had invaded Poland, yet at the war’s end, they were unwilling to intervene when the Soviets established a puppet regime there.

Western officials and media often failed to criticize their Soviet ally or consider dictator Josef Stalin’s goals rationally. The vast provision of aid to the Red Army, for instance, might well have been the boost needed for the Soviet regime to subjugate Eastern Europe in the postwar period.

“We might have wasted less money and material than we did,” said U.S. diplomat George Kennan in a 1951 letter. “We might have arrived in the centre of Europe slightly sooner and less encumbered with obligations to our Soviet ally. The postwar line of division between East and West might have lain somewhat farther east than it is today, and that would certainly be a relief to everyone concerned.”

The Soviet communist regime and its Polish communist allies certainly benefited from the destruction of the organized resistance loyal to the prewar Polish government. Soviet propaganda downplayed the achievements of the Home Army and labeled them as “reactionaries.”

George Orwell, the disillusioned British communist who authored “Nineteen Eighty-Four” and “Animal Farm,” expressed his disgust with the general inclination among journalists to sympathize with the Soviet attitude on the Warsaw Uprising.

“One was left with the general impression that the Poles deserved to have their bottoms smacked for doing what all the Allied wirelesses had been urging them to do for years past,” Orwell wrote in September 1944.

“Don’t imagine that for years on end you can make yourself the boot-licking propagandist of the Soviet regime, or any other regime, and then suddenly return to mental decency.”

Meanwhile, participation in World War II on the side of the Allies seemed to absolve Stalin of his treacherous prewar actions—the Soviet Union had originally been an ally of Germany, and in fact had aided Hitler in the 1939 invasion of Poland that began the war in the first place. Only in 1941, when Germany invaded the Soviet Union, did the communist superpower switch sides.

Unsurprisingly, Moscow resumed the oppressive and murderous policies toward its Polish satellite state that the communist leadership had indulged in from 1939 to 1941.

Tens of thousands of patriotic Polish soldiers and officers, especially those who had lived in Great Britain, hastened to rebuild their country. Rather than giving these men a hero’s welcome, the communist government subjected them to persecution, including show trials, torture, and execution.

Warsaw, now the capital of the communist Polish People’s Republic, also became the namesake of the Warsaw Pact, a Soviet-controlled military alliance that, throughout the Cold War, placed the resources and territory of Eastern Europe at Moscow’s disposal.

The real history and memory of the Polish resistance in World War II—that Poland was one of the few occupied nations to produce no major traitors or collaborators; that Polish operatives secured valuable intelligence or destroyed Nazi infrastructure in daring missions; that pilots of the Polish government-in-exile matched and exceeded their Western comrades in the air—could only enter public discourse in the 1980s, when cracks started to appear in the communists’ control.

The Solidarity movement, fueled by inextinguishable patriotism and the perseverance of the traditional Catholic faith, pitted millions of ordinary Poles against the foreign-backed regime that preached Marxism and atheism. By 1989, 45 years after the Poles had tried to retake their capital from the Nazis, the Soviets relented. On June 4, general elections were held, and the communist authorities left office in 1990.

The Polish experience, from the closing months of World War II to 1989, holds continued relevance for those living in the world’s surviving communist regimes. Hundreds of millions of Chinese have participated in a movement to renounce the Communist Party and its affiliated youth organizations. Impoverished North Korea, which has preserved a Stalinist program of absolute social control and military aggression, stands increasingly isolated.

In a speech delivered on July 6 in Warsaw, President Donald Trump tapped into this experience, praising the Poles for standing up to their regime’s totalitarian ideology.