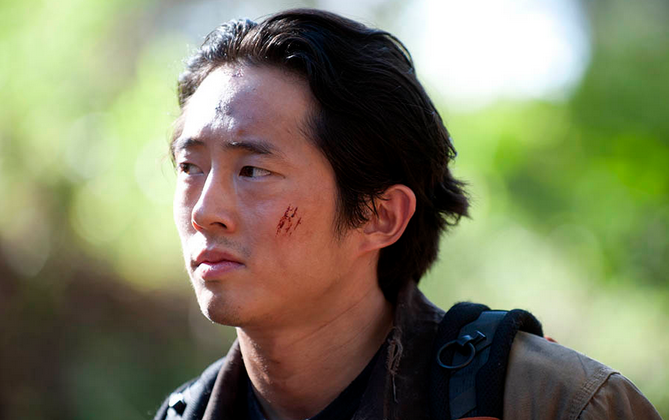 The Walking Dead season 5 is being filmed, with episode 2 wrapping up this week.

A major death rumor is circulating about a primary character.

That would be Glenn.

“RUMOR: we have heard from multiple sources about a possible death. Word is the death of Glenn was filmed yesterday. It’s possible it could be someone else, but multiple sources stated Glenn,” said The Spoiling Dead Fans.

“Reports are the set was locked down and everyone was told the cast would not be coming out. “

Seemingly adding credibility to the rumor, Alanna Masterson (Tara) tweeted at 1:28 p.m. “When someone great is gone.” Tara and Glenn grew very close during season 4 as they tried to find Maggie.

“It’s said that Steven was hugging production members and shaking everyone’s hand while leaving,” The Spoiling Dead Fans added. The page noted that a rumor isn’t confirmation. It also speculated that if Glenn did indeed die it could be offset by Beth returning.

It makes sense that at least one main character dies early in season 5. A lot of them are trapped in Terminus, where death seems imminent. Especially with the group trying to exact revenge and/or escape, there would likely be some sacrifices needed as not everyone could get out alive.