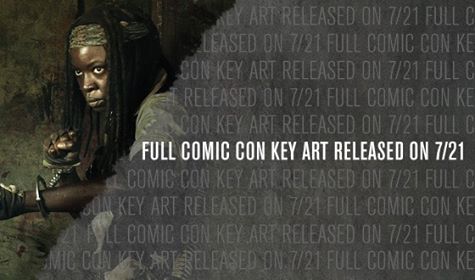 The picture from the network, which will be fully revealed sometime today, shows Michonne in a defensive posture while restrained by handcuffs. She appears ready to throw a punch at whatever or whoever is threatening her.

Michonne is among the group who was trapped at Terminus as of the end of season 4.

“There are a couple of characters in particular coming up in Season 5 that will get very big chunks of their backstory revealed in a very cool way. Some of that is from the comic and, like always, some of it is not,” he said.

Kirkman also said that he wishes he had written Daryl Dixon into the comic series.

“Daryl Dixon is definitely the big one, but that said, I think it’s great that there is something in the television show that you can only get from the television show. He’s a tremendously important character in that when we go to adapt stories from the comic, there’s always this X-factor that automatically makes us change stories in some way,” he said.

“The best part of doing the show is looking at my comic like a rough draft and sitting down with the writers to make it better.”

Season 5 is slated to premiere in October 2014.