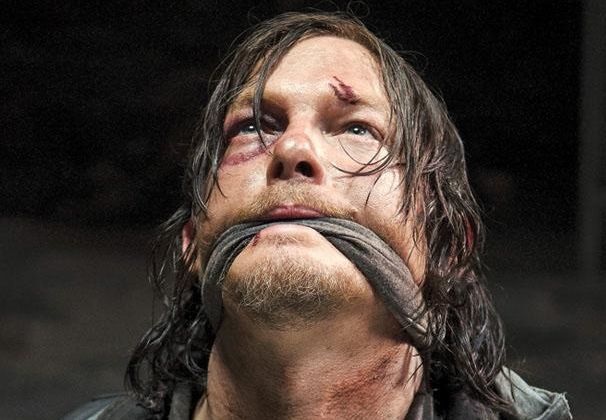 The official trailer for The Walking Dead season 5 is coming in mere weeks.

AMC confirmed recently that the trailer will be released on July 25, presumably during the San Diego Comic Con.

Meanwhile, as filming continues for the season–which is set to premiere in October–a new picture of Daryl Dixon was published.

The photo shows Daryl bound and gagged, presumably in Terminus. He has dried blood above his left eye and looks like he hasn’t gotten a shower in a while, though he does inexplicably have a fairly clean shave.

Daryl is looking up toward the sky, seeming to show a bit of fear but also defiance.

Daryl along with Rick and most of the rest of the group is trapped at Terminus as of the end of season 4.

There’s some speculation about whether Daryl will die at some point this season, but Norman Reedus recently said that if Daryl does die then he’d be angry.

“If they kill me on the show, I’ll probably like set my trailer on fire,” he said during one of the new Walking Dead documentaries. “They’ll probably have to call in a bunch of cops to escort me off the property, because I’ll be so pissed.”