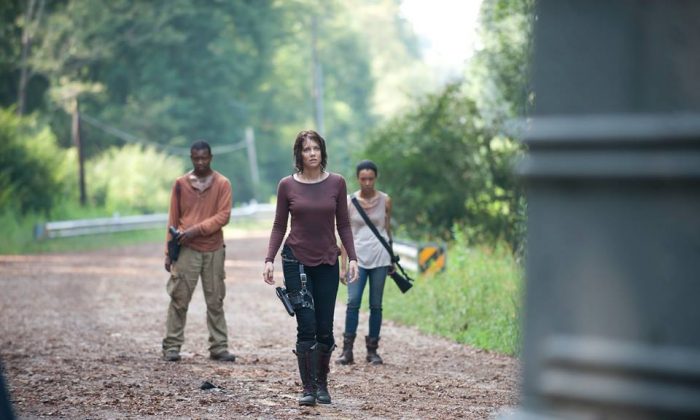 The Walking Dead season 4 is unfortunately close to the end–there’s three episodes left–and people are wondering about season 5. Who will be in the cast, when does filming begin, and when does the season premiere?

And now, thanks to Lauren Cohan (Maggie Green), we know that filming is set to begin in mid-April. Cast members are being called back to Atlanta then.

There’s reportedly at least one major death coming up on the popular show, but who’s being killed is completely unclear at this point.

Asked if she thinks about her character dying, Cohan told Entertainment Weekly: “Maybe the thought goes through my mind, but I can’t entertain it, I just think about this moment.”

She added:  “It’s nice because…any death that happens definitely leads to greater story. The death of Hershel has been the saddest death for me…but it’s going to now propel so much huge story. It doesn’t change the fact that it absolutely sucks, but it does propel so much story,” she points out. “I think when I’m totally done on this show I’ll be able to understand it all, but right now I don’t totally understand how we process it all.”

So will she be back on the Atlanta set or will Maggie be dead?  “The first half of April is a vacation, and then we’ll see what happens in the second half,” she said with a laugh. Season 4 filming wrapped up last November.