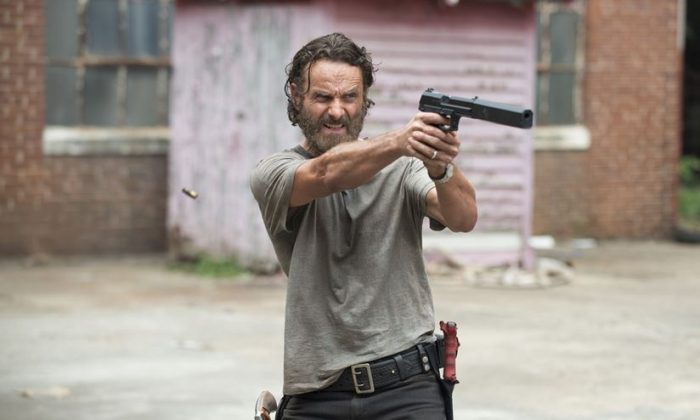 The Walking Dead season 5 is set for a break after episode 8, the midseason finale.

Spoilers indicate that the episode, which is titled Coda, will feature a showdown between Rick’s group and the group at the hospital as Daryl and the others try to rescue Beth and Carol.

The official description adds more insight–it seems that Rick, weary of the conflicts that keep arising, wants to find a peaceful solution, much like he tried against the Governor the second time. But it’s not going to happen.

“New enemies disregard rules and morals; although Rick wants to find a peaceful agreement, the enemies seem to prefer a more violent resolution,” the description says. Episode 7 saw Rick’s crew–Daryl, Tyreese, Sasha, and Noah–kidnap three of Dawn’s officers to try to set up a trade with Dawn, although one later escaped.

A video preview shows a scene where Rick meets with someone from Dawn’s group–possibly Dawn herself, but likely an emissary–and lays out his proposal to swap people. It’s likely the first time that Dawn’s group has heard that Beth has outside friends, and that Beth and Carol know each other.

The preview also shows Glenn and Maggie and their group in some trouble.

And Father Gabriel, after escaping the church, looks like he’s in trouble as well, leaving plenty of possibilities for a major death to take place.

The biggest potential spoiler is that Beth is the one who dies in the midseason finale, a claim that comes from multiple sources.

One source claims that Beth turns into a walker and that Maggie has to put her down although the other said that it doesn’t happen.

“There is a ‘standoff’ of sorts. Beth has the choice to leave and has a moment of gumption (or weakness, depending on how you look at it) that leads to her demise. Beth ends up believing that the choice she makes is a necessity in the end. But Beth doesn’t envision things ending the way they do,” the Spoiling Dead Fans said.

“Beth’s death will be a harrowing moment not only for Beth, but for Daryl, Carol and the others as well.”

It’s unclear whether Glenn’s splinter group will somehow join back up with Rick’s group for the midseason finale, but Abraham finally snaps out of the self-pity and anger he’s feeling after Eugene’s stunning admission by the end of episode 7, while Glenn and Tara get closer to Rosita.

Not much else specific has come out about the midseason finale yet, although Norman Reedus did discuss it with TV Guide in its upcoming issue, saying that Daryl is so focused on getting his two close friends back that “he’s ready to just burn the [hospital] down.”

“It’s a different world now, and certain people have gone so dark that you have to put down the rabid ones to survive,” he said.

Reedus said that the final moments of the episode are so “devastating” that they led him to cry for about an hour.

Reedus also said that Daryl will be pushed into new emotional territory.

“He’s one of those characters where they keep dangling a carrot in front of him and he keeps reaching for it but the carrot falls in the mud right before he’s about to get it,” he said.

The comments come after Walking Dead creator told The Hollywood Reporter that the midseason finale is “deadly.”

“This confrontation is definitely going to be substantially different from the confrontation with The Governor (David Morrissey) or Gareth (Andrew J. West),” Kirkman said about the conflict between Rick’s group and Dawn’s group.

“We do continue to evolve these human-to-human conflicts in very interesting ways, and this is no different. There are going to be some pretty unexpected events in our midseason finale, which is as it should be. On a scale of one to 10, I’d say [the midseason finale is] pretty deadly.”

Other rumors suggest that Noah and Tara will die at some point this season, possibly in the midseason finale.

Another interesting rumor, via IMDB, is that Morgan shows up in some regard in the midseason finale, although the context is unclear.

The season will return on February 8, 2015 with eight more episodes.