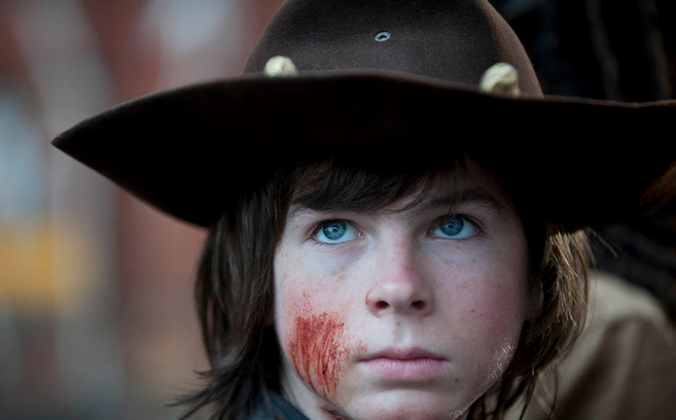 The Walking Dead season 4 finale is set for a March 30 air date–and the predictions, speculations, and spoilers are flying.

At the end of the last episode, Glenn’s bigger group just made it into Terminus, meeting the welcoming but ultimately creepy Mary.

Carol and Tyreese are headed to Terminus, as are Rick, Carl, and Michonne.

Let’s check out what we know so far based on trailers and other pieces of evidence.

1. Rick, Carl, and Michonne Arrive at Terminus in the Season Finale–With Others

Thanks to a brand new promo trailer out of New Zealand, we know that the trio make it to Terminus at some point–and they are with three others, who appear to know their way around.

The six walk straight in and go up to Mary. Whether it’s right after this or at another time, Rick does not look happy, demanding: “Where are our people?”

Predictions and speculation: Rick, Carl, and/or Michonne could die in Terminus. But they all end up living.

Facing off the Terminus people isn’t enough of a challenge for Rick, Carl, and Michonne. Sometime in this same episode they appear to be in a life-and-death fight with Joe and his group.

Rick first encountered the group when they entered the house he, Carl, and Michonne were staying in after the prison. He hid under a bed and finally escaped without them knowing he was there, and he ran off with his son and Michonne. Except he left a dead man behind, and a man who had passed out actually saw his face. Joe and his group vowed revenge.

The second part of a New Zealand trailer appears to show Joe talking to Daryl, saying “You screwed up, you hear me?” One of Joe’s group is holding a gun on Daryl.

Rick also appears to be in the same scene. Daryl then gets hit by one of the guys. Meanwhile, Carl is in a car with a man outside trying to get in at him. Michonne is there, too. Joe adds: “Today’s a day of reckoning, sir!” In one of the other trailers, Carl and Michonne are hugging. Is it grief related to this situation or another?

Predictions and speculation: Daryl looks like he’s in a tough spot with Joe’s group and is getting beaten by them. He could get killed in the crossfire of the fight between the two groups.

3. Carol and Tyreese Meet Up With Rick

Carol and Tyreese in episode 14 of season 4. (Gene Page/AMC)

This one is purely speculative for now because there’s no evidence that Carol and Tyreese are even in the season finale–though it would seem right that they have at least a brief but important part.

One theory is that the pair do meet up with the trio, shocking Rick and Carl when they see baby Judith is still alive. Rick will be equally shocked when he sees Carol and Tyreese together, but he would likely be okay with Carol being back if Tyreese is okay with it–or there might not be enough time for all that talk.

The happy reunion could be interrupted by Joe’s group.

Predictions and speculation: In this scenario, Carol is feeling sacrificial and dives in the way of a bullet or is in some other way killed. Tyreese could also be killed in some way during the fight.

4. Glenn, Maggie, or Another in Their Group Die in Terminus

The hostage situation where Rick is demanding of the Terminus residents: “Where are our people?” may indicate that Glenn and his companions–Maggie, Bob, Sasha, Abraham, Eugene, Rosita, and Tara–are in trouble. Rick may have spotted some type of warning sign.

This could lead to a situation where Glenn or one of his group are killed.

Predictions and speculation: It’s tough to get into any kind of logic for which character is killed off, but Eugene appears particularly important to the season 5 storyline of getting to Washington D.C., which would probably make at least one of Abraham and Rosita safe. A friendship is also developing between Eugene and Tara, while romance is budding between Bob and Sasha. It does feel like a major, major character gets killed in the finale. Out of Glenn’s group, that would mean him and/or Maggie.

5. Terminus is Actually a Safe Haven and Rick’s Group Stays There

The hints for season 5 about Rick and “the group” heading to Washington, D.C. appear to contradict this theory but it’s possible that the hints are wrong. Or season 5 could start ahead of time and whatever gap between, say, the group staying safe in Terminus and then whatever prompted them to take off to D.C. could be explored through flashbacks.

Series creator Robert Kirkman said in an interview posted on the AMC website:

“Terminus could be what it is on face value or it could be hiding something darker. We do try to change things up, so it’s entirely within the realm of possibility that Terminus is all lemonade and sunshine and recliners and pajamas. So we’ll see, maybe this season has a happy ending.”

‘It makes sense that Abraham’s mission is his No. 1 sole purpose. We establish in episode 15 that he’s willing to do anything to get Eugene there. This episode is the first time we get an opportunity to see the dynamic between Eugene, Rosita and Abraham. Abraham says, “I’m going to Washington. I’ll probably get there more safely the more people I have with me.” He’s trying to enlist as many people as he can because the more people he enlists for the mission, the greater the likelihood that Eugene is going to get there safely. When and if they meet up with Rick and his group, would Rick be willing to go along on that mission, or will they find a place to hold up at Terminus that allows them the safety that they’ve had for the past three years? That’s what we’re going to find out.”

Prediction and speculation: Whatever happens in this episode, it’s not Rick and the group settling in somewhere. At least one of the core group dies and Terminus turns out badly. Rick talks with Abraham and agrees to journey with Eugene and whoever else is left to Washington to try to cure the disease.

6. At Least One Person Dies in the Finale

In that same trailer, we see someone being devoured by walkers. The voice sounds like a male but it’s tough to make out any other details.

Many people believe that at least one of the major characters–Rick, Carl, Michonne, Glenn, Maggie, Carol, Tyreese, Sasha, Bob, Daryl, or Beth–gets killed in this finale. However, there’s no real indication so far as to who that is.

Speculation and spoilers: See above.

7. Rick’s Probably Not Going to Die

Robert Kirkman, the creator of the comic books and who is involved with the show, emphasized on Reddit recently that Rick is not ultimately a “safe” character–but there’s a strong piece of evidence that he’s safe for now.

That would be a casting call for season 5, which has a brief description.

It says that season 5 “begins with Rick and the group heading to Washington D.C., where they meet new danger and a new enemy. Once again, Rick must do whatever it takes to keep the rest of the group safe.”

No other character names are listed.

Speculation and spoilers: I’d be willing to wager that Carl, Michonne, Eugene, and Abraham are all safe, along with Rick.  Michonne will develop into Rick’s romantic interest because Carl will be okay with it, while Eugene and Abraham are needed in D.C. Everyone else? Who knows.