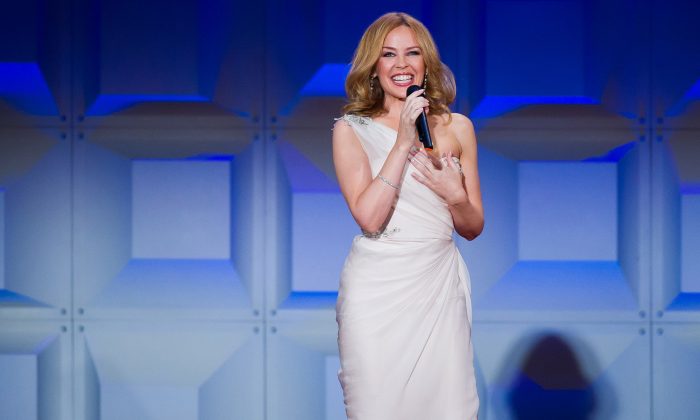 Kylie Minogue performs at the GLAAD Media Awards on May 3, 2014 in New York. (Photo by Charles Sykes/Invision/AP)
Entertainment

The Voice Australia Series 3 A Hit Thanks to New Judges Kylie Minogue and will.i.am

The Voice Australia Season 3 has become a hit ever since pop-singer Kylie Minogue joined the judges. Minogue joined the team of Ricky Martin, Will.I.Am, and Joel Madden in the third installment of the show, attracting almost 2.16 million viewers for the season premiere on May 4, 2013, according to a Sydney newspaper.

The previous season had judges Joel Madden, Delta Goodrem, Seal, and Ricky Martin, but 300,000 less viewers during the Season 2 premiere.

Minogue, who is from Melbourne, reeled in some 722,00o viewers, while the capital Sydney attracted 672,000 viewers, according to The Sydney Morning Herald. The singer was immortalized in her hometown where a bronze statue stands on the Walk of Fame-like waterfront.

‘The Voice,’ which airs on Monday on the Nine Network, helped trump up the viewer rating by 33.6 percent on the channel as compared to other channels on that night.

During the previous seasons, Goodrem was labeled as a ‘mean’ judge on the show and faced a lot of criticism from fans of the show. She did however tell News that she was absolutely devastated with the response. “No matter what I did, people had their own thoughts about me already and perhaps they weren’t accustomed to me having opinions,” Goodrem told the media site.

Although some fans expressed their discontent with her departure. “It’s actually not the same without @DeltaGoodrem” said Carly Heading via Twitter.