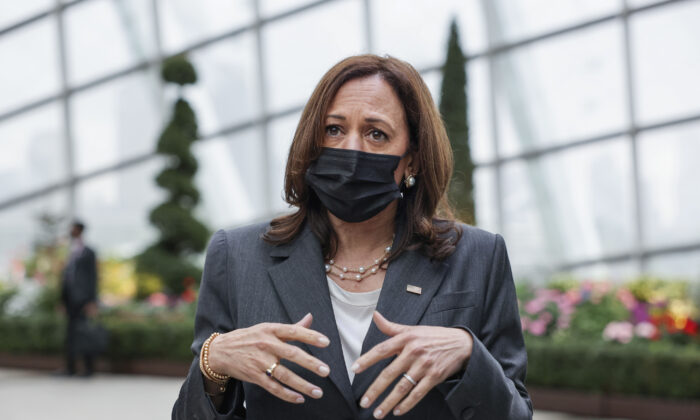 ‘The View’ Hosts Test Positive for COVID, Are Asked to Leave Before Kamala Harris Interview

Two “The View” hosts were asked to leave the set on Friday right before an interview with Vice President Kamala Harris after they both tested positive for COVID-19, the disease caused by the CCP virus.

Ana Navarro and Sunny Hostin were on the ABC program with fellow hosts Joy Behar and Sara Haines. When the show returned after its first commercial break, they were asked to leave the set by a producer, according to a clip from the show.

Then, Navarro and Hoston were ushered off the show’s set before it went to another commercial break.

When the show returned after the second break, Behar said that her co-hosts tested positive for COVID-19, the illness caused by the CCP (Chinese Communist Party) virus.

“No matter how hard we try, these things happen,” Behar said. “They probably had a breakthrough case and they’ll be okay, I’m sure, because they’re both vaccinated. … And the vice president is being prepped for her arrival. They cleaned the table, they washed the hands. Everybody is getting all cleaned up and she’ll be out here in a second.”

After members of the audience were called upon by the hosts, a masked producer appeared and stated: “I have an update: Everything is just being done to be as safe as humanly possible so what we’re going to try and do now is an interview with the vice president remotely.”

Fully-vaccinated Sunny Hostin and Ana Navarro have tested positive for COVID, and are pulled off The View set just ahead of VP Kamala Harris’s appearance. pic.twitter.com/Gvel0yIBU0

“We’re going to talk to her remotely?” Behar asked. “Even though she’s here,” the producer said before going to another break.

A spokesperson for the White House confirmed to news outlets that Harris was never in contact with Hostin or Navarro.

“The vice president did not have contact with the hosts before the show. Her schedule today will continue as planned,” deputy press secretary Sabrina Singh said Friday.

Harris eventually appeared on “The View” at around 11:45 a.m. ET. During the interview, she urged people to get vaccinated.

Just a few hours earlier, President Joe Biden urged people now eligible for COVID-19 booster shots to get the third Pfizer shots after the U.S. Centers for Disease Control and Prevention (CDC) endorsed the doses for millions of older or other vulnerable Americans.