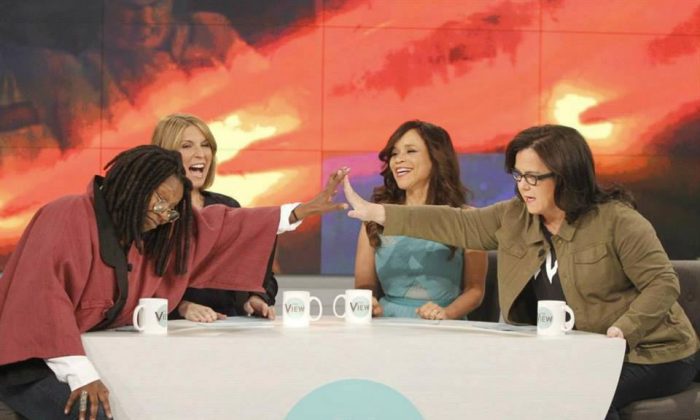 The View Canceled? Tabloid Says ABC May be ‘Ditching’ Show

The View may be canceled by ABC because the latest combination of hosts isn’t working out, according to a new report.

The daytime show has struggled recently, having switched the lineup considerably. Whoopi Goldberg and Rosie O’Donnell are joined by Nicolle Wallace and Rosie Perez in the latest iteration.

A source told OK! Magazine that the network may be “ditching” the show because the roster “just isn’t jibing with loyal viewers … or each other.”

“They’ve changed the set three times this season, have brought in guest hosts, are contemplating bringing back former panelists and are doing anything and everything to try to find a rhythm with these women, and it just isn’t working… ‘The View’ is too expensive to be a sinking ship,” a source said.

“ABC is ready to cut its losses and move on to something else. The execs are even contemplating adding an extra hour to ‘Good Morning America’ — just like NBC has done with ‘Today.'”

The source did not say when the cancellation would happen if it happens.

On the other hand, a source told Gossip Cop that the cancellation rumor is “absurd” and “isn’t true.”

“OK! fails to mention is that The View doesn’t even come on in the hour following Good Morning America,” the website said.

“The magazine also fails to mention what would happen to Live! with Kelly and Michael. It doesn’t really seem to know when or how this ‘cancellation’ might actually unfold. That’s because it’s entirely baseless speculation.”

Barbara Walters, Jenny McCarthy, and Sherri Shepherd left the show after season 17, just a season after Joy Behar and Elizabeth Hasselback departed. In fact, none the current hosts have been on the show for more than two seasons.

There are also rumores that Wallace and Perez, both of whom are on their first season, will be replaced by all or two of the following: Lauren Sanchez, Laverne Cox and Brooke Shields.