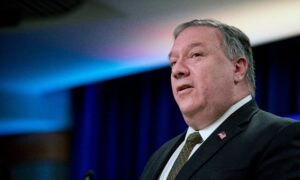 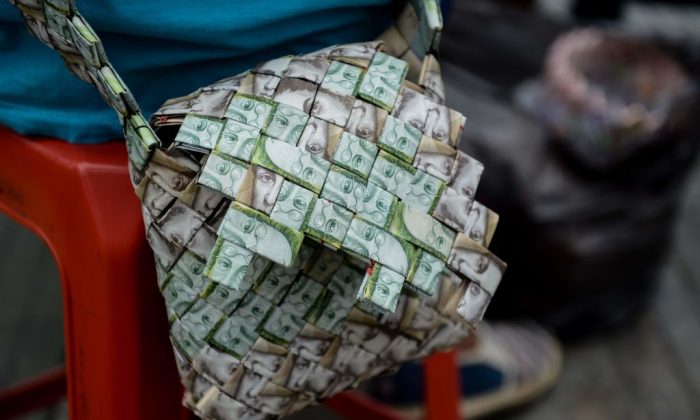 A purse made by Venezuelan Wilmer Rojas, out of bolivar bank notes in Caracas on Jan. 30, 2018. (Federico Parra/AFP/Getty Images)
Americas

Money has become so worthless in Venezuela’s collapsing economy that street sellers are crafting it into baskets, hats, and other art.

Inflation under the socialist-run government has been accelerating since the collapse of the oil industry in 2014 and is estimated by the IMF  to reach 13,000 percent this year.

Wilmer Rojas, a father of three, is one of the street vendors trying to make money from the bank notes.

He even makes purses.

“People throw them away because they are no good to buy anything,” he said, reported AFP.

‘You can use magazine paper or newspaper pulp, but currency notes are better because they are not worth anything, they are all the same size and you don’t have to waste time cutting them.”

Rojas has yet to sell his creations, but he is hoping to follow in the footsteps of artisans in downtown Caracas, where similar bags sell for as much as 300,000 bolivars.

That’s enough to buy a kilo of meat—at this week’s prices, anyway.

Economists’ estimates of Venezuela’s current inflation vary, but some say it could reach 30,000 percent or higher in the coming year.

In November, the government introduced a new 100,000 bolivar note. It was worth around $2.

The Washington Post and other media recently reported that parents are choosing to leave their children in the care of orphanages, rather than take their chances of survival in the collapsed economy.

For now at least, one artist has found a way to make a living selling illustrated notes to foreigners.

Jose Leon is a 26-year-old designer, who uses the notes as a special kind of canvas, drawing faces of Star Wars characters over the images  of the famous historical figures on the notes.

Venezuela’s rampant inflation and economic catastrophe are the results of the systematic dismantling of the market economy and government corruption under the Chávez regime, according to some analysts.

“Chávez had this incredible disrespect for the rule of law and private property,” Fergus Hodgson, editor of the intelligence publication Antigua Report, told The Epoch Times in August last year.

“He would go out and say, ‘Expropriate that building,’” said Hodgson. “He nationalized industries and farming areas. He started his pet projects, like the Chavista communes.”

After 14 years in power, the socialist leader died in 2013. Nicolás Maduro, a member of Chávez’s socialist party, then took the reigns of power, promising to continue Chávez’s policies.