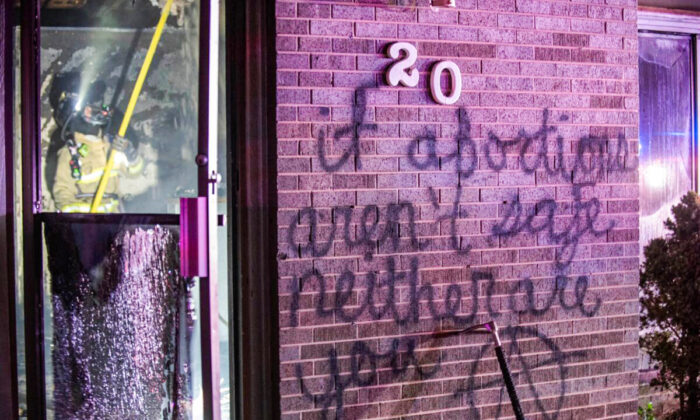 A message written on the wall of a pro-life pregnancy resource center that was set on fire in Longmont, Colo., on June 25, 2022. (Longmont Police Department)
Viewpoints

The Vandalism Against Crisis Pregnancy Centers Is Only the Beginning

Bethlehem House was the latest target of the more than 100 acts of vandalism, including smashed windows and even arson, that have been committed against crisis pregnancy centers across the United States since May, when a draft of the Supreme Court’s Dobbs ruling overturning Roe v. Wade was first leaked to the media. Typically, the vandals also scrawled red and black graffiti onto benches and sidewalks around Bethlehem House, writing out phrases such as “Janes [sic] Revenge” and “If Abortions aren’t safe, neither are you!”

This is nasty stuff, designed to intimidate staff and volunteers and deter pregnant women from approaching these faith-based charities aimed at persuading them to choose alternatives to abortion. But graffiti can be erased, windows replaced, walls repainted, and security beefed up—if at great expense. The real battle against crisis pregnancy centers is the war of words, the propaganda war currently being waged by the abortion industry and its progressive allies in the Democratic Party and the media.

The aim is to make crisis pregnancy centers look so fraudulent in the public eye—the operative word is “disinformation”—that they’ll either be forced to shut down or cease operations on their own. The strategies range from legislation in Congress sponsored by Sen. Elizabeth Warren (D-Mass.) that would empower the Federal Trade Commission (FTC) to impose crippling fines upon them to a petition by Google employees asking the tech giant to remove search results that reveal crisis pregnancy centers’ existence and locations.

The United States currently has anywhere from 2,500 to 4,000 crisis pregnancy centers, a number that dwarfs America’s 870 or so freestanding abortion clinics. Almost all are sponsored by Catholic dioceses, evangelical churches, and other religiously affiliated organizations, such as Birthright International and Care Net. Some of the centers, such as those operated by Vans for Life in San Antonio, are simply mobile vans outfitted with ultrasound equipment and staffed by pro-life counselors that park across the street from abortion clinics and advertise free pregnancy tests.

Although crisis pregnancy centers serve vastly fewer pregnant women than the nearly 1 million who obtained abortions in 2021, some of them claim that 90 percent of the women who listen to their pro-life counseling and view ultrasound images of their unborn babies at their facilities decide against abortion.

This high success rate rankles progressives, who seem to believe that the only way to talk a woman out of an abortion is to lie to her. Hence, their constant insistence that the centers “deceive” and “manipulate” the women who visit them. Crisis pregnancy centers have been accused of informing women that abortion is more dangerous than childbirth, that it causes breast cancer, and that it can lead to infertility. The centers allegedly pretend to be abortion clinics, and their counselors pretend to be licensed doctors and nurses.

“Crisis pregnancy centers … are there to fool people looking for pregnancy termination,” Warren told reporters in Massachusetts. “We need to shut them down all around the country.”

She characterized pro-life counseling as “torture.”

But when it comes to documenting this alleged fraud, it’s hard to find any solid evidence. Earlier this year, two female NBC reporters went undercover to visit crisis pregnancy centers in Texas. They reported that volunteer counselors had informed them that abortion causes cancer and infertility and that they were shown a video linking abortion and mental illness. A counselor gave one reporter a free pair of baby booties, she said. But we don’t know what was actually said, and allegedly deceptive anti-abortion videos haven’t surfaced.

An oft-cited study of “misleading” pregnancy-center practices published in the American Medical Association’s Journal of Ethics in 2018 turns out to be mostly anecdotes, plus advocacy. Its physician-authors wrote that some of their patients had felt “disgruntled” and “deceived” by what they had been told at pregnancy centers.

Furthermore, anyone who has visited a crisis pregnancy center or even one of their websites can see that the centers in no way resemble abortion clinics. For example, the website for Bethlehem House, which is supported by the Catholic Diocese of Springfield, Massachusetts, features an image of the Madonna and Child, photos of cute babies born to women who have used the center’s services, and the exhortation “Choose life.”

Even the centers’ harshest critics, including the authors of the 2018 AMA study, concede that most of them offer material and social support to pregnant women who need it: maternity clothes and diapers; formula, parenting classes; housing; in some cases, referrals to social services; and information about adoption. It seems only fair that they be allowed to give truthful information about the possible negative consequences of abortion. Many women experiencing a crisis pregnancy can feel genuinely conflicted about whether to abort or keep their babies, and many women who have had abortions experience genuine regret and even depression afterward.

Critics of crisis pregnancy centers have been trying for years to shut them down. One of the most extreme measures was a 2015 California law that required the centers to post prominent notices at their facilities—in 13 languages—informing women of the availability of free and low-cost abortions elsewhere and also to disclose that they employed no licensed medical providers. But in a 5–4 decision in 2018, the Supreme Court ruled that compelling religious people to post material contravening their beliefs likely violated the First Amendment’s guarantee of freedom of speech.

Even so, free-speech objections haven’t stopped progressives from seeking to put what they call “fake clinics” out of business. Period. Warren’s proposed Stop Anti-Abortion Disinformation Act would empower the FTC to exact fines of $100,000 (or 50 percent of their parent-entity’s earnings) for violating the legislation’s prohibition against as-yet-unspecified abortion “disinformation.”

The Google employees’ demand that their employer suppress search results for crisis pregnancy centers echoes a June 17 letter from 21 Senate Democrats to Google’s parent company, Alphabet, insisting that the centers either be stripped from Google search results or, if they do appear, that Google post a disclaimer stating that the facility doesn’t provide abortions.

Gobs of paint and graffiti, broken windows, and fire damage are expensive liabilities for crisis pregnancy centers typically operating on shoestring budgets. But they pale compared to the relentless propaganda assault from the left that could destroy them completely.