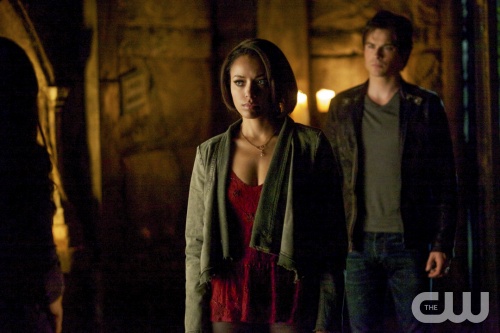 The Vampire Diaries Season 6 Spoilers: Damon and Bonnie Could be a New Couple

The Vampire Diaries season 6 might include Damon Salvatore and Bonnie Bennett becoming a new couple.

The pair are off somewhere after what happened in the season 5 finale. Show producers have confirmed that they’re alive but say they’ll be disconnected from the main group for at least a while.

Damon and Bonnie had a relationship in The Vampire Diaries books but haven’t been very friendly through the first five seasons of the television show.

“To me, in spite of what [Bonnie and Damon] had in the books, that kind of relationship would only be born out of chemistry, and an on-screen connection,” executive producer Julie Plec told Entertainment Weekly.

“They love each other. They’re very excited to work together. There could be instant chemistry there that we all sit back and watch like we did, frankly, with Klaus and Caroline, with that very first scene. There was never any plan to have romance but he cures her on her freaking birthday and all of a sudden, the world is melting.. So you never know, but what we did want to do is we wanted to service the Bamon relationship from the books and at least give those two characters an opportunity—that we never thought we’d have frankly cause they never liked each other, and for good reason—to bond and get close and to be comrades. So it will start there, and it may never go any further—that’s not the plan, but you never know.”

As for where the pair are, Plec previously told TVLine:

“Where they are is part of the mystery of the beginning of the season. It’s not torturous, but it’s by no means a roller coaster ride of fun. If nothing else, it’s a bit of an existential experience.”

She elaborated when asked how aware Damon and Bonnie will be of their new surroundings.

“They’ll be aware that they’re no longer where they thought they were — but they’re also not dead, per se,” she said.

“They’ll be asking a lot of questions, along with the audience, including: What’s going on? Where the hell are we? And how do we get home?”