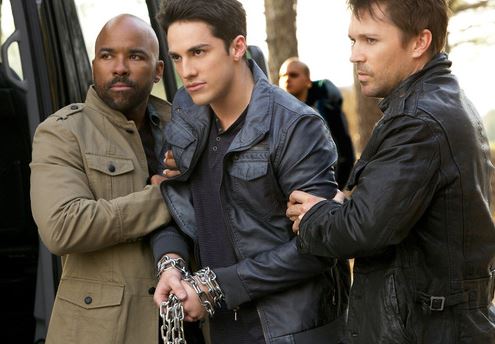 The Vampire Diaries season 5 finale will include at least three deaths, and a big battle for Mystic Falls against the Travelers.

The official description reveals that in the May 15 finale, Damon, heartbroken by an unexpected tragedy, is focusing on holding himself together while pushing Bonnie harder than ever to find a way to stop the disintegration of the Other Side.

Sheriff Forbes becomes horrified when Markos uses violence against Tyler/Julian to prove that Mystic Falls is now under the control of the Travelers.

Forbes gives Damon new information, prompting Damon to come up with a dangerous plan that relies on split-second timing from Jeremy and Matt

But his plan causes a massive explosion in Mystic Falls, and everyone is caught up in the confusion, leaving a trail of heroism, sacrifice, relief and despair.

The finale also includes Caroline providing Liv with some personal motivation in order to make Liv help her, while

Executive producer Caroline Dries said that along with the “blood, death, and tears,” there will be more reunions with “faces that we’ve been missing over the series.”

She also told TVLine that the finale will end in a cliffhanger and added to TVGuide that there will be at least three deaths.

Paul Wesley (Stefan) said that the finale “definitely establishes new parameters in the environment we’ll be shooting in Season 6.”

“They reset things in a way, and the writers have the ability to now change the circumstances and locations of where the show takes place.”