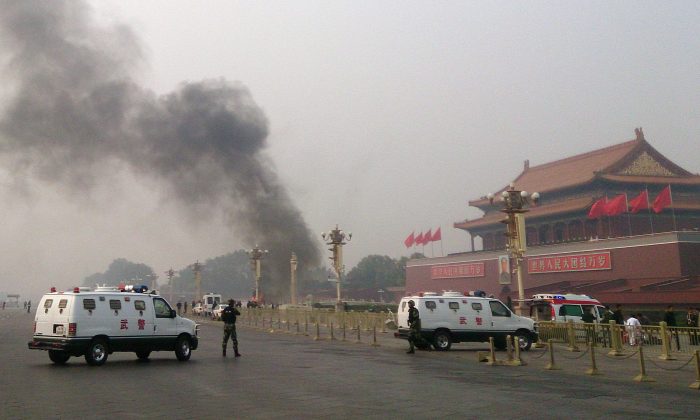 Police cars block off the roads leading into Tiananmen Square as smoke rises into the air after a vehicle crashed in front of Tiananmen Gate in Beijing on Oct. 28, 2013. The car was driven by a Uyghur, and Uyghurs fear this incident will be used by the Chinese regime to justify harsh suppression. (STR/AFP/Getty Images)
China

The Uses of Naming Groups ‘Enemies’ in China

A man, his wife, and his 70-year-old mother drove onto Tiananmen Square in Beijing on Oct. 28, injuring 38 people and killing 2 before crashing into the guardrail of the Jinshui Bridge. The car then burst into flames, killing its three passengers.

The people in the car were Uyghurs, a predominantly Muslim Chinese ethnic group from Xinjiang province. The Chinese Communist Party (CCP) called the incident a terrorist attack. In the short time since, more than 60 Uyghurs have been arrested by Chinese authorities.

“Uyghur people live in terror in our own homeland,” said Alim Seytoff, spokesperson for the World Uyghur Congress in a phone interview. “We fear for our lives.”

Seytoff said he and others fear that history is repeating itself. They believe the CCP will use the incident to create public hatred, and it will use this hatred to justify and increase its suppression of his people.

What Seytoff fears the CCP is doing to the Uyghurs had been done before to other groups.

Protests in Tibet in 2008 and the reports of self-immolations by Falun Gong practitioners in 2001 on Tiananmen Square both betrayed signs of stage managing by Chinese authorities. Both were followed by brutal suppression.

An award-winning documentary, False Fire, debunked the Tiananmen Square “self-immolations.” It showed how one “immolator” held a one-liter pop bottle said to be filled with gasoline between his legs while covered in flames. Yet, the gas did not explode or the bottle melt or even show traces of soot.

The documentary quoted a Washington Post report’s finding that the two victims of the incident who could be identified were not Falun Gong practitioners, according to their neighbors.

When the official propaganda video was viewed in slow motion, it showed a police officer killing one of those in the incident by striking her head with a small club.

Falun Gong, also called Falun Dafa, is a spiritual practice based on the principles of truthfulness, compassion, and tolerance. Its teachings strictly forbid killing of any kind, including suicide.

According to Levi Browde, executive director of the Falun Dafa Information Center, then-CCP leader Jiang Zemin used the self-immolations to justify his suppression of Falun Gong.

Prior to the “immolations,” the response of the Chinese people to a campaign of persecution against Falun Gong had been unenthusiastic.

Soon after the incident occurred, CCTV aired a special news report on it. Soon broadcast and print media were flooded with stories about the immolations, with a particular focus on a twelve-year-old girl, Liu Siying, said to have been badly burned. The Chinese people’s opinion turned, and the brutal persecution of Falun Gong began to take off.

“The very fact that Jiang Zemin had to do that shows he was fighting an uphill battle,” Browde said in a phone interview. “Jiang Zemin needed something very dramatic, and very in your face.”

Browde said the self-immolation had less of an effect outside China, where people had seen Buddhist monks light themselves on fire as a form of protest. Yet inside China “it really ingrained into people this true hate.”

This was compounded, he said, by the “experience of the Chinese people that if the government is going to go after somebody you need to hide yourself because what’s coming is going to be brutal.”

The Tibetans endured a similar incident. Ahead of the 2008 Beijing Olympics, Tibetans were holding large-scale peaceful protests.

Chinese state-run media had not covered the Tibetan protests, yet CCTV broadcast a protest in Lhasa on March 14 as soon as it started. When it turned violent, Chinese authorities claimed it had been planned by the Dalai Lama.

A “rioter” who was photographed by the BBC wearing traditional Tibetan clothes and brandishing a large knife was seen by a witness back at the police station, putting down the knife and changing from the costume into his police uniform.

Photos were released of Chinese soldiers lined up while holding the robes of Tibetan monks.

Witnesses reported that Chinese police at times seemed to be more interested in filming the violence than in doing anything to stop it.

Soon after the March 14 protest, the CCP began raiding villages and arresting Tibetans. Reports began coming in from around Tibet of security forces killing unarmed protesters. The Tibetan writer Tsering Woeser reported 30 protesters gunned down in Aba County, among whom were a five-year-old child and an elementary school student.

In the years since, the CCP has tightened “re-education” campaigns aimed at forcing Tibetans to, in effect, abandon Tibetan Buddhism.

More than 100 Tibetans have turned to self-immolation as their last line of protest.

Following the car careening onto Tiananmen Square on Oct. 28, the CCP demanded that foreign media describe this as a terrorist attack.

According to terrorism researcher Max Abrahms, professor at Northeastern University and member of Council on Foreign Relations, the current evidence coming out of China suggests the crash was not a terrorist attack, but rather an extreme form of protest. Instead, the CCP is likely using the terrorist label to feed its own interests.

“In authoritarian countries like in China, I think there is a lot of unspoken unhappiness with the political status quo,” he said. By using the terrorist label, “it puts the government in a better political position, because the government no longer has to pay attention to the grievances of the perpetrators.”

“By focusing on the violent act, it’s a way for the government to discredit the political agenda of the non-state actors,” he said.

Labeling a group as enemies intending to harm the rest of society, he said, also has the effect of rallying people beneath its flag. The added public support then gives the regime room to become more forceful.

According to Alim Seytoff, the World Uyghur Congress spokesperson, since Xi Jinping took control of the CCP in November 2012, several hundred Uyghurs have been killed by Chinese authorities.

He said Uyghurs are kept under surveillance, regularly go through checkpoints with armed guards, and have their homes raided by Chinese security forces looking for religious books. If people show any resistance, he said, “the usual practice is to shoot and kill them and then label them as terrorists.”