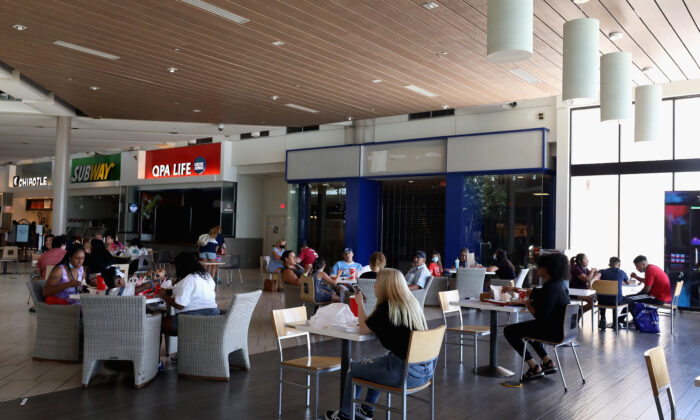 Consumers sit in the food court as they return to retail shopping at the Arrowhead Towne Center in Glendale, Ariz., on June 20, 2020. (Christian Petersen/Getty Images)
Viewpoints

The US Life Expectancy Is at Its Lowest Point in 25 Years—Why?

Last year, the average life expectancy of Americans dropped to 76.1 years, the lowest in 25 years, according to the Centers for Disease Control and Prevention. The question, though, is why? In short, Americans are desperately unhealthy. This is a point that has been emphasized before. Nevertheless, if the United States has any hope of turning this deeply unhealthy tide, uncomfortable truths must be explored and discussed.

One major reason why Americans are dying younger has to do with their ever-expanding waistlines. Moderate obesity is shown to reduce lifespan by roughly three years.

Adults aren’t the only ones in trouble. Today, 20 percent of children and adolescents are obese. By the end of the decade, 26.3 percent of 5-9-year-olds will be obese. This is simply unacceptable. According to the Population Reference Bureau, rising childhood obesity rates will have a detrimental effect on U.S. life expectancy rates.

We’re way past the point of telling people to put down the donut (or 10 billion donuts) and go for a walk. About 80 percent of Americans barely exercise, anyway.

How about introducing a “fat tax”? Ridiculous, many readers will shout, no country in their right mind would ever introduce such drastic measures. Well, one country did, and that country is Japan.

In 2008, Japan introduced the Metabo Law. As Sajjad Choudhury noted, the law required all males and females between the ages of 40 and 74 to have their weight taken and waists measured by their employers. Men were forbidden from having a waist larger than 33.5 inches in size; for women, 35.4 inches. To put these figures in perspective, the average American man has a waist circumference of 40.2 inches; the average American woman has a circumference of 38.7 inches. The weighing and measuring took place once a year. An employee who failed to make improvements was fined, as was their employer.

The Japanese government wanted to reduce the country’s obesity rate by 25 percent. Fourteen years later, only 3.6 percent of the Japanese population is obese.

Naturally, some readers will accuse me of cheerleading mandatory waist measurements and furthering weight-based stigmas. I’m not. I’m simply discussing a policy that the Japanese government introduced–a policy that worked, I might add. For what it’s worth, Japan has the highest life expectancy rate in the world.

Granted, the Japanese government’s approach to targeting obesity was far from perfect. Also, it probably wouldn’t work in the United States, a highly individualistic place. However, something must be done.

If the Japanese-fashioned stick sounds too extreme, how about using the carrot instead?

Last year, in an effort to address the United Kingdom’s obesity epidemic, the British government announced that it would begin offering rewards (clothing vouchers and the likes) to those who began exercising and eating more healthily. According to The Guardian, participants in the program would be expected to wear “Fitbit-style devices” that track an individual’s step count and offer nutritional advice. Those found to be increasing exercise load and partaking in organized events (5K jogs, etc.) would be rewarded with points. The program is expected to be rolled out this year.

Again, some will criticize the UK approach, insisting that the program smells a lot like nanny-state interference. Perhaps. But to address the obesity issue, no perfect solutions exist. The United States finds itself approaching the point of no return.

When Tess Holliday, an American plus-size model who weighs 279 pounds, makes anywhere between $25,000 and $50,000 per month, serious questions must be asked. This is not a criticism of Ms. Holliday. This is a criticism of society. There’s nothing positive about being obese. Obesity is not something to be worshipped, championed, and actively encouraged. Remember when gluttony was considered a deadly sin? Today, it’s considered a virtue. There is a reason why Brendan Fraser’s new movie, “The Whale,” has hit a nerve. It’s because Fraser’s character, a morbidly obese man, is representative of 25 million Americans.

I understand that weight is a touchy subject. However, excessive fat accumulation is associated with major depression, suicidal ideation, and suicide attempts. If we continue ignoring the elephant (or the whale) in the room, then the United States is headed for a world of economic, psychological, and existential pain. After all, above everything else, health is the key to happiness. Without it, misery is all but guaranteed.