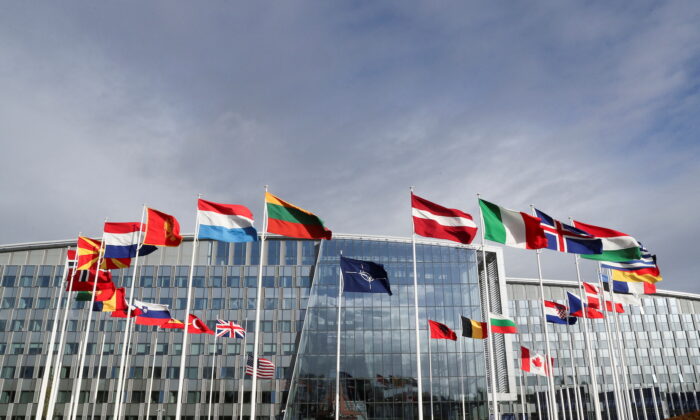 Flags wave outside the Alliance headquarters ahead of a NATO Defense Ministers meeting, in Brussels, Belgium, on Oct. 21, 2021. (Pascal Rossignol/Reuters)
Viewpoints

US Is Losing Germany Over Its Obsession With Russia

“Germany’s pivot from America,” another recent headline, this time in Politico, comes largely to the same conclusion.

“Under the influence of a potent cocktail of energy and commercial interests, and a political culture laced with good old-fashioned anti-Americanism, Germany has strayed from the Western fold,” it argues.

These reports and others of Germany and the United States being increasingly at odds are unfortunately accurate. What’s inaccurate is resting the blame on Germany. The United States is losing Germany as an ally and a friend because of its repeated attempts to bully Germany into hewing to an American conviction that Russia is an irredeemable enemy.

Nord Stream 2, a pipeline to supply Germany with natural gas from Russia, is a case in point. Russia is the willing seller; Germany is the willing buyer; the United States is the know-it-all that has spent the past decade attempting to scuttle the deal on the grounds that the Germans don’t realize the danger of dependence on Russian gas.

Germans think the United States should mind its own business and let Germans mind theirs, saying Russia has been a reliable supplier of gas to Germany for decades, even during the Soviet era. Russia today supplies Germany with cheap gas traveling through the 10-year-old Nord Stream 1 pipeline via the Baltic Sea as well as expensive gas traveling through Ukraine, the difference in cost coming from tariffs that Ukraine levies on gas flowing through its territory. Because Nord Stream 2 bypasses Ukraine and so can’t be held hostage to it, Germans would be able to displace expensive Russian gas transiting Ukraine with cheap Russian gas via Nord Stream 2.

The United States has also been bullying Germany into militarily supporting Ukraine against Russia. Germans, by a factor of about two to one, prefer a collaborative over a confrontational approach. The best way to resolve the conflict between Ukraine and Russia, Germany believes, is for the United States to go home—Germany favors a revived diplomatic process known as the Normandy Format that involves just four parties: Russia, Ukraine, France, and itself.

U.S. foreign policy, in fact, is toxic to most Germans, who point to the Iraq War, the overthrow of Libya’s Gaddafi, and Afghanistan as examples of misguided American militarism that cost blood and treasure only to lead to failed states.

Just 10 percent of Germans view the United States as their most important foreign policy partner, despite U.S. leadership in NATO, the defensive military alliance created after World War II to protect Germany and the rest of Western Europe from the Soviet Union’s threat to the free world. NATO, in fact, best explains the source of the rift between the United States and Germany.

After the Soviet Union’s collapse left the Russian economy in shambles, Russia embraced the West, bringing in U.S. economists to privatize its economy, and freed mainstream religions from communist constraints. Germany and the rest of Europe stopped seeing Russia as a threat. Not so the United States, which continued to see Russia through a Cold War lens.

With Russia enfeebled and in chaos, the United States attempted to permanently weaken Russia by turning NATO into an offensive alliance that soon expanded eastward toward the Russian border. In 2014, the United States also demanded that NATO members each militarize to the tune of 2 percent of their GDP.

Most of NATO’s now 30 members, failing to see Russia as an existential threat, have balked at that level of spending—2 1/2 times that spent on environmental protection and more than three times that spent on housing—when other areas were deemed more urgent. Germans resent not only NATO spending but also NATO’s raison d’etre itself: 60 percent oppose aiding any NATO ally at a time of war, making NATO’s continuance an obstacle to the relationship between Germany and the United States.

Germany, as a sovereign state, feels free to enter into trade deals with Russia or anyone else and to refuse to wage wars of others’ choosing. The United States, seeing itself as the leader of the free world and still seeing Russia as an archrival, feels free to twist the arm of any country, ally or not, to bend it to its will.

Until there’s a meeting of minds on Russia, and the United States accepts Germany’s right to set its own policies, there will be no reconciliation between them, no meaningful alliance, and no friendship born of mutual respect and commonality of interest.