Inflation Does Not Produce Economic Growth
0 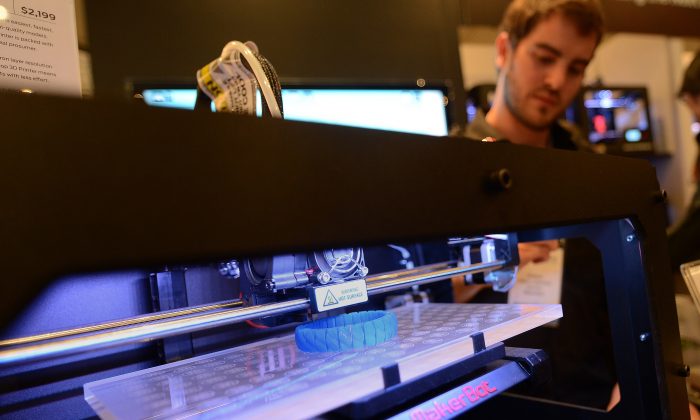 'Inside 3D Printing' conference in New York, April 22, 2013. The prospects for 3-D printing in manufacturing offers some hope that it will boost growth in manufacturing output in the United States. (Emmanuel Dunand/AFP/Getty Images)
Opinion

The US Economy Grows, but Jobs Don’t

Confounded by offshoring and technology, macromanagement does not produce job growth

The U.S. economy seems to suffer from a bout of schizophrenia, as it cannot decide whether it’s doing well or not. There has been stable, albeit not spectacular, growth in the post-crisis phase, but analysts point to many headwinds. The bubble word is back, this time in the stock markets, and above all else increasing employment seems stubbornly resilient to macromanagement.

There is a school of thought that is optimistic about a number of developments and innovations in the U.S. economy. The booming domestic energy sector will soon make the United States the world’s largest oil and gas producer, and the resultant significant drop in the price of natural gas has had a positive impact on diverse industries, such as steelmaking, plastics, and a range of energy-intensive manufacturing sectors.

Overall manufacturing output has grown faster than the broader economy over the last four years, with manufacturing’s share in the economy increasing for the first time since World War II, for last three consecutive years. The prospects of 3-D printing—the technology that allows production of goods by layered “printing” of material—has given these scholars ground for cautious hope.

The attributes of niche specialization and customized manufacturing challenge the strengths of those economies, such as China, dependent on economies of scale, with highly concentrated agglomerations specializing in large-scale manufacturing. High-tech niche manufacturing, in addition to large-scale enterprises, have contributed to Japan and Germany still retaining significant industrial sectors. Combining craftsmanship with manufacturing, 3-D printing could be the U.S. route to manufacturing resurgence, or so many think, although the employment implications are unclear.

All this has prompted some analysts to be bullish about the prospects of the U.S. economy in general and manufacturing in particular. According to them the bogey of offshoring has been laid to rest. They point to a number of firms announcing plans for new manufacturing facilities or bringing back offshored activities. The trend has been validated by the intellectual rite of passage for any phenomenon of our times—the bestowing of a new term. New words for this manufacturing spurt include inshoring, re-shoring, next-shoring, and other imaginative neologisms.

The growth prospects for services sectors, which contribute over 80 percent to U.S. GDP, are critical to the long-term health of the U.S. economy. In that connection, the ongoing big data revolution has also fed the enthusiasm of commentators. A number of factors have come together to make this possible.

The possibility of merging extremely large datasets from diverse sources—publicly available databases maintained by governments, proprietary company databases, and Internet-generated data streams—and huge advances in data storage and cloud computing, as well as the new synthesis of computer science based data-mining techniques with statistical tools have wrought a sea change in data analytics. Add to this mix the economic sense and sensibility introduced by economists and domain experts, and it’s easy to see why a field that’s not new per se has now reached a critical mass of resources and capabilities.

At the same time, the emerging market economies, many of which were the recipients of offshoring largesse in manufacturing and services jobs from the United States, themselves may be in a pickle. Their economies, especially Asian giants China and India, are slowing down. China is grappling with a potential housing bubble, a runaway shadow financial sector, and uncertain municipal finances while India is caught in a complex vice of budget and current account deficits, inflation, and supply-side constraints.

The key attraction of offshoring, China’s overall manufacturing cost advantage, is steadily eroding. Chinese urban worker wages have quadrupled in dollar terms since 2000. The benefits of China’s industrial clusters, extensive and efficient supply chains, and smoothly functioning infrastructure and logistics may have run their course. Further improvements, some argue, can only bring marginal efficiencies.

Moreover, headlong rush in the pursuit of lower costs has come at the cost of a blind eye to the management and organizational complexities of offshoring. Those who say that offshoring is dead also argue that the capacity of emerging economies to absorb any further offshoring, given educational and work-skill shortfalls, may now be severely limited.

While all of these trends are genuine, there remain serious questions regarding both their sustainability as well as what they imply for job creation in the United States. While manufacturing output has recovered somewhat, the pre-recession peak has yet to be attained. U.S. manufacturing industries have added about 500,000 jobs since the trough in 2010, but the total number is still about 2 million less than in 2007—before the crisis hit, and while there are no figures on re-shored jobs, they are unlikely to be substantial.

It may be true that the impact of urbanization and industrial clusters seen in China are one-time events, with whatever economic benefits possible already squeezed out. However, two significant factors must be taken into account: Increased and rapid urbanization, involving rural-to-urban migration of another 300 million to 400 million people over next few decades is the explicit goal of Chinese policy.

This latest stage of urbanization, together with the newly constructed high-speed rail network and widespread Internet usage, has created the basis for a renewed push toward greater efficiencies and cost savings, as well as a further fillip to both innovation and agglomeration. Interior and smaller cities of China have yet to reap the full rewards of offshoring. The job outlook for manufacturing in the United States still faces the continuing twin headwinds of globalization and technological change.

McKinsey & Company studies have pointed out that a large number of specialized firms have emerged in the United States that can provide data, models, and tools for data analytics, and companies will have to make a tough call on what to outsource and what to keep in-house. The needs of data privacy and proprietary analytical models may work in favor of an internal solution. On the other hand, the demands of training data analysts in-house are considerable. Also, analytics may not be a core focus of expertise and the managerial and organizational requirements of running it effectively can be formidable.

From domestic outsourcing to offshoring is but a step, albeit not a trivial one, and the U.S. corporations’ propensity to outsource may lead to offshoring. It’s been suggested that the United States may face a shortage of up to 190,000 data scientists and analysts, in addition to more than a million related jobs in management and support services. Many elements of data analytics can play to the strengths of some emerging economies in statistics, economics, math, or software, and the weakening currencies of at least some of these countries can restore the cost advantage.

The pace of U.S. offshoring, especially in manufacturing, has slowed. Partly, this is because the low-hanging fruit has been plucked and cost-push offshoring, mostly initiated by large multinational corporations, has reached a mature stage. Also, rising wages abroad and management, logistical, and operational issues have bedeviled offshoring.

On the other hand, there are signs of pull-factors, such as initiative coming from specialized niche consulting firms, from India and China, which ferret out specific operations in services and manufacturing that can be offshored. High-value added innovations such as 3-D printing and big data, among others, underscore the increasingly tenuous link between innovation and employment growth. Ultimately, the logic of globalization and a market economy leads globally active firms to resort to global locations, whether for their markets, core assets, inputs, or labor.

Ashok Bardhan is co-editor of “The Oxford Handbook of Offshoring and Global Employment.” © 2014 The Whitney and Betty MacMillan Center for International and Area Studies at Yale (yaleglobal.yale.edu).