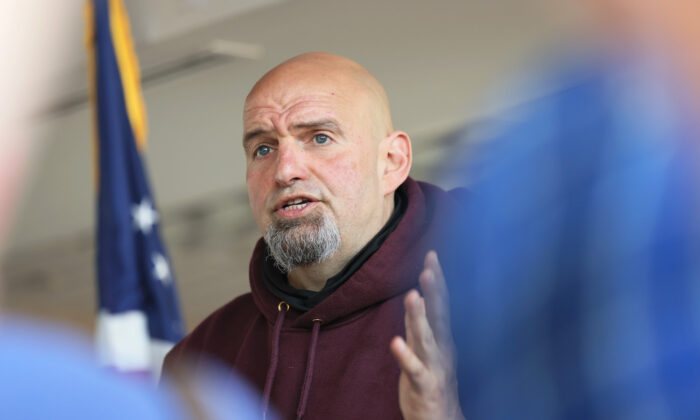 The Upside-Down World of the Pennsylvania Senate Race

ERIE, Pennsylvania—If you are looking for conventional wisdom metrics that D.C. reporters and strategists use to outline what is going on in the race for the U.S. Senate in Pennsylvania, the short and the long answer is there are none.

The Democratic nominee, Lt. Gov. John Fetterman, with whom no one outside his tightly held inner circle has had a back-and-forth conversation since his stroke and subsequent surgery in May, is spending his time and money snark-posting about his opponent’s roots in New Jersey, even resurrecting the career of Snooki (“Jersey Shore”) for ads and tweets about Oz and New Jersey.

His opponent, Republican nominee Dr. Mehmet Oz, is spending his time far below the radar. Nowhere now are the endless ads that were the hallmark of his primary campaign this spring. That volley of attacks between him and rival David McCormick, which drove his approval ratings into the ground, has given way to the unglamorous but essential work of driving across the state, county by county, listening to voters’ concerns.

In the May Democratic primary, Fetterman easily defeated Conor Lamb and Malcolm Kenyatta. He won because of the years he had spent building a relationship with Democratic voters in cities like this one. Add in his reputation for transparency, delivered with an economic populist message, and his appeal was pitch-perfect for the liberal Democratic voters who show up in primaries.

Fetterman’s lack of public interaction with anyone—regular people or reporters—outside of short videos or posts on Twitter has raised concerns among voters who supported him. Although blue-check Twitter loves his snark and rewards him daily with retweets and stories about how clever his tactics are, voters say they hope he will pivot to issues sooner rather than later.

Keystone College professor Jeff Brauer said Fetterman’s use of stunts to drive a story are pretty common in campaigns. “Good, bad, and ugly gimmicks have always been part of American politics,” he said, adding that oftentimes these types of tactics are successful.

Brauer added that once fall arrives, he expects Fetterman to become more serious. “It will be much more telling then if Fetterman isn’t willing/able to make that shift,” he said.

Fetterman has always been most successful when he is meeting people where they are. Before his stroke, it would have been hard to imagine him not being out on the trail at county fairs, parish festivals, and stock car races, just randomly showing up in towns, cities, or suburbs and pressing the flesh. But for now, that is all apparently off the table.

In short, Fetterman’s ground game has always been Fetterman himself, not some volunteer, not some DSCC transplant, not some surrogate. Just him, listening, asking, and interacting, and the word of mouth that spreads that liberal gospel.

The question is, will tweet-storming be enough to replace his greatest asset: himself?

“Ultimately this election, like so often in Pennsylvania, will come down to the kitchen-table issues that motivate most Pennsylvanian voters—Democrats, Republicans, and independents alike; those issues this cycle most especially include the cost of living/inflation/gas prices and crime/public safety,” said Brauer.

“So indeed, it will better serve the Fetterman campaign to focus on those issues more fully, rather than gimmicks, particularly when the race heats up at the end of the summer,” he said.

Some Democrats and reporters have been lulled into believing because Oz is not on the air, he must not be doing anything. But just because a candidate is not on the air doesn’t mean he isn’t doing the things you have to do to win a race. In truth, Oz is doing all of the things Fetterman currently cannot do. He is attending business roundtables, meeting with trade groups and unions, and walking through small towns, suburbs, county fairs, and parish festivals.

To date, he has logged over 2,500 miles on the state’s roads and held over 50 campaign events in 20 counties; in a state like Pennsylvania, that is how you win a competitive race.

The challenge Oz faces outside of improving his negatives is that he has no natural base in the state. This means he needs to keep doing what he is doing; it is exhausting and grueling, but certainly not impossible.

Fetterman leads Oz in the race for the seat by 6 points in a recently published AARP poll. The result shows the race tightening from a USA Today poll earlier that had Fetterman leading by 9 points.

Fetterman has never run head-to-head against a Republican opponent. He faced no Republican challenger in the city of Braddock in his run for mayor. He lost a Senate primary race to another Democrat in 2016. He won the lieutenant governor primary against another Democrat and was on the ticket with Wolf for lieutenant governor, but not the main event.

Fetterman has also always been a loner. His ties to the state party and local Democratic parties are threadbare at best. But his lone wolf approach has not cost him anything yet. Beginning with his loss in the U.S. Senate primary race in 2016, he never stopped campaigning. By the time he ran and won the lieutenant governor primary in 2018, he had found a way to do it without the support of a conventional ground game or the support of the party.

That win was historic in that no candidate from either party had ever unseated a sitting lieutenant governor in a primary.

Oz, too, has never run head-to-head against a Democrat. In fact, the only race he’s ever run and won was the one in May.

Fetterman’s challenges are multiple. It is a terrible year for Democrats. His strongest asset has been sidelined. Voters in this state are leaving the Democratic Party in droves. All Oz has to do in theory is not run against Fetterman but focus on the failures of Biden and liberalism. This could help him overcome the carpetbagger label that Fetterman is trying to affix upon him.

There is an upside-down world feel about this race that defies conventional wisdom at every turn. The result here come November will not be the result of election models, nor of anything that happens on Twitter.