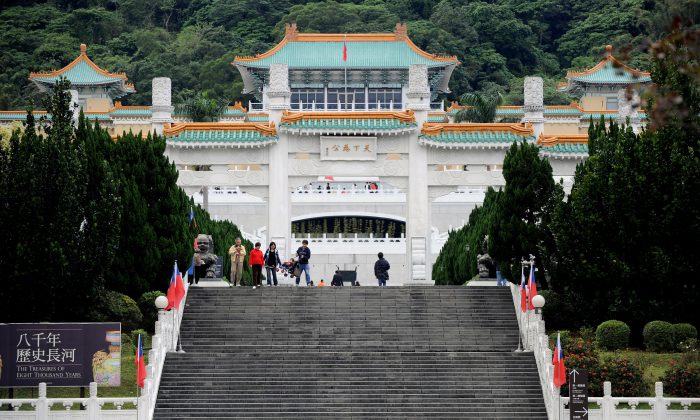 Fans of traditional Chinese and Asian culture will be pleased to learn that a series of major expansions are coming to Taiwan’s National Palace Museum, known for its rich showcase of art and artifacts from multiple imperial dynasties.

The museum, based in Taipei, capital of Taiwan, will be seeing its grounds swell several times in size. Simultaneously, an entire southern branch will be opened in the city of Taibao in southern Taiwan’s Chiayi County.

This expansion is scheduled to open on Dec. 28, and its exhibits will offer visitors not just Chinese but also indigenous Taiwanese culture and the heritage of other East Asian nations such as Japan and Korea.

Currently, almost 700,000 artifacts are kept by the National Palace Museum, but there is only space for a few thousand at any given time.

Most of the imperial treasures currently held in the museum come from the Song, Yuan, Ming, and Qing dynasties, covering the last 1,000 years of Chinese history. There are multiple jade artifact exhibits depicting the central role this precious stone plays in the Chinese scholarly and spiritual tradition.

Other treasures include antiques, rare books, historical documents and paintings. The 3,000-some items on exhibit are switched out every few months.

The Southern Branch, designated as an Asian Art and Culture Museum, has been in the works for over a decade, when the Taiwanese government approved the project in 2004. It’s aim, according to the official website, is to integrate Taiwan’s regional culture with its greater East Asian context.

Permanent exhibits planned for this expansion include Buddhist art, Asian textiles, tea culture, a multimedia-oriented gallery of Asian art, and an exhibit showcasing the local history and culture of Chiayi County. South Asian costumes, Islamic jades, Chinese and Japanese porcelain, as well as ancient Korean celadons will grace the special and international exhibitions.

According to museum director Chou Kung-shin, expansions planned for the existing National Palace Museum in Taipei may triple the number of items on simultaneous display to over 10,000. This project is still in its infancy, and is expected to be completed in 2024, Chen told a reporter from the American Chamber of Commerce in Taipei.

Traditional Chinese art is highly symbolic in nature, emphasizing the harmony between heaven, earth, and humanity. Exhibits at the palace bring this philosophical and religious essence back to life for modern audiences.

A 50-hectare-wide, Asian-style park garden is planned for the Southern Branch, as well as creative training workshops intended for private firms looking to develop their understanding of East Asian aesthetics.

“We would like companies to have cultural knowledge,” Chou said. “We will use National Palace Museum artifacts to help them create their own things.”

The workshops are an offshoot of an ongoing museum program that has worked with dozens of companies each year for the last four years.

The overhauls are also expected to help alleviate some of the pressure on the National Palace from the increasing volume of visitors—in 2009 alone, the museum logged 2.5 million visits. Since then, that number has swelled by 1.5 million. Over 10,000 people visit the museum daily.

The Southern Branch is expected to complement the existing Taipei site and boost the cultural and tourism scene across Taiwan, with potential for further museum openings in other parts of the country. Planning their exhibitions and events in tandem, the National Palace Museum aims to eventually compete with the Parisian Louvre, which attracts about 10 million visitors per year.

The current palace was built in Taipei only in the 1960s, but the history of the National Palace Museum is one that starts in 1920s Beijing and follows the contours of upheaval that China experienced throughout the 20th century.

The museum has its roots in the birth of the Republic of China in 1912, which overturned the Qing Dynasty and inherited the artifacts of the Forbidden City, seat of Manchurian imperial rulers. It was founded in 1925, about a decade after the abdication of the final Chinese emperor, Pu Yi.

The Forbidden Palace, seat of the Manchu imperial court and host to much of its material riches, became the site of the aptly-named museum. When the Japanese invaded China in the 1930s, great efforts were made to relocate the contents of the museum to safer locations. Some items were sent abroad as exhibits, including a 100-piece collection with 3,000-year-old bronze artifacts that spent much of World War II in the Soviet Union.

In the late 1940s, as the Republican Chinese government began to lose the civil war against the communists, leader Chiang Kai-shek made arrangements to move the contents of the National Palace Museum to Taiwan, where the Republic of China maintains de facto existence.

Less than a quarter of the items originally shipped to southern China from Beijing during World War II made it to Taiwan. On the mainland, traditional culture, especially the culture of the literate elite and imperial rulers, was harshly suppressed, criticized, and physically damaged by the communist regime, particularly during the Cultural Revolution of the 1960s and 1970s.