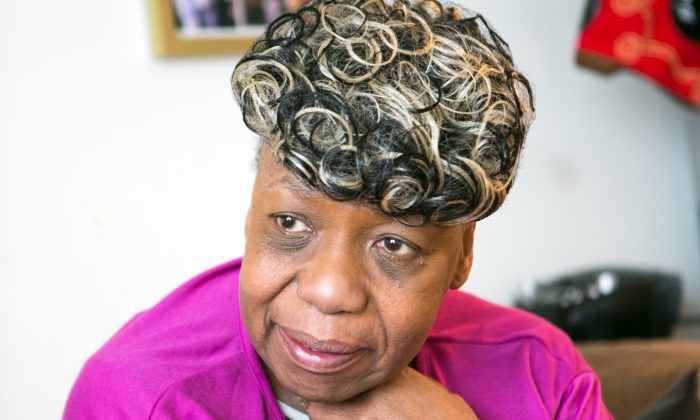 NEW YORK—”Is there anything you can do about it, you see, I am Eric Garner’s mother,” Gwen Carr said softly, after security officers told her they could not let her into Garner’s hearing.

The security guards at the Supreme Court on Staten Island were noticeably annoyed. Many protesters had flooded the courthouse to hear oral arguments Feb. 5 for the release of the grand jury records that resulted in no indictment for the officer who used a chokehold to arrest her unarmed son shortly before he died on the sidewalk.

The courtroom, which seats roughly 65, had filled up long before the 10 a.m. start time. Disgruntled supporters slowly scattered down the stairs obeying instructions to clear a path.

Carr arrived 15 minutes late with Garner’s daughter, Erica Garner. At age 64, Carr’s body no longer moved as swiftly as it did during the days when she single-handedly raised six children.

Her droopy chestnut eyes looked around the courthouse and saw anger.

“What do you mean they can’t go in? Don’t they know who they are? Erica Garner’s picture is only in the papers like every other freaking day,” said a protester, fuming on the stairs.

Carr quickly told her entourage, a medley of loved ones and unknown faces, to remain calm.

Sure enough, within five minutes, word spread that Garner’s relatives could not enter the hearing and people began to give up their seats.

“That’s what I said, let’s not make a scene,” Carr recalled, chuckling to herself on her sepia couch a week later. “A lot of times I find that being calm, you can catch more flies with honey than vinegar.”

There is a gentleness about her, of manner, appearance, and approach, that relieves her of the weight of her agonizing responsibilities.

Her days are marked by an endless stream of meetings, interviews, talks, marches, press conferences, as well as errands for Eric Garner’s six children and two grandchildren.

Since Garner’s death her image—distant, sad eyes below a tuft of blond and black ringlets—has become a national icon. Overnight, Carr was thrust into the vertigo of a renewed civil rights movement.

Carr’s work to bring justice to her son has been compared to that of Fannie Lou Hamer, a civil rights leader from the ’70s who did not find her calling until later in life.

Carr’s cause and peaceful demeanor, in some ways, is carrying on the work of Martin Luther King Jr.

In King’s 1967 speech “Where Do We Go From Here?” he mentions the issue of African-Americans and police impunity.

It would have been King’s next movement had he not been assassinated, said R. L’Heureux Lewis-McCoy, an associate professor of sociology and black studies at City College of New York. “Ms. Carr is making sure her son’s legacy is remembered, and it connects to a longer tradition,” he said.

Although her life has been largely apolitical up to this point, the adversities from her early life have strengthened her to lead through this final tragedy, and the movement that it has sparked.

Carr grew up in South Brooklyn in the ’50s and ’60s, before the neighborhood was divided into Prospect Park and Cobble Hill.

After high school she worked as a long distance operator for the New York Telephone Company, which had just upgraded from switchboards to “brand new, state-of-the-art buttons.”

She was a nice girl, who never got in trouble with the law. About the wildest thing she did was meet the boys she’d connect calls for when she was 18 years old.

“We used to tell the guys to meet us downstairs after work, but not tell them what we were wearing,” she said. “We see them and decide whether we want to talk to them or not.” (One of her friends met her husband this way.)

But fate did not plan for Carr to have a happily ever after.

When Carr was 26, her first husband died from high blood pressure.

His passing left her the sole caretaker of their three small children. Eric Garner, the oldest, was 6, while their youngest, Ellisha Flagg, was 4 months.

To provide for her children, Carr needed a better job. She went to college and graduated with an accounting degree from  New York City College of Technology, and took classes at NYU Polytechnic School of Engineering.

Eight years after her husband’s death, just when things were beginning to stabilize, she had to take in her niece and two nephews because her brother and sister-in-law unexpectedly died from natural causes.

But she pulled through, providing for six children with the money she earned from processing data for the New York Stock Exchange.

“All my life I was the bread winner,” she said.

Today, even though she has been unable to return to work as an MTA train operator since Eric Garner’s death, she continues to help her family members pay bills. “Whatever they need, I make sure they have a place to stay and food to eat,” she said.

“She’s the matriarch of the family,” said Selina Atteberry, a close friend of Carr’s.

But the matriarch’s savings are running low. Carr pays the major bills for her household because her second husband suffered injuries from his construction job and is now relying on Social Security disability.

The funds raised for the Garner family have only gone to Eric Garner’s spouse and children.

Carr tried to go back to work two months after Eric Garner’s death, even though she still felt shaky.

One by one, co-workers gave their condolences. It was nice to hear, but quickly became overwhelming.

At the end of the day she clocked out 10 minutes late because the train she was operating was held up. She had also arrived late for work that day.

The dispatcher, who had not seen Carr since her son’s death, ran down the outdoor Coney Island platform to greet her.

“Oh Ms. Carr, you came in eight minutes late but I’ll give you your 10 minutes anyway,” Carr recalled her saying.

Carr snapped. “I don’t want your ten minutes,” she said.

It was an unusual emotional outburst for Carr, and she felt that it was a sign she was not ready to return to work.

It was dangerously easy to get fixated on memories—like when Eric Garner was an infant he spent nine months tied to an oxygen tank in the hospital, and how as an adult he loved fixing cars and dreamed of opening a chain of garages across the country, but his weak respiratory system could not handle the fumes—and miss a train signal.

Luckily, she didn’t miss any signals on her first day back.

“But I didn’t want to be out on the road when my head wasn’t completely clear,” Carr said. “I had thousands of people under my care every day.”

She decided to put in her papers and retire.

Carr will start receiving partial retirement checks in March. She won’t get her full retirement pension, as she did not finish the full 25 years. She only made it to 23.

In the meantime, she pushes forward with her home responsibilities.

Bags of raw carrots, onions, and cabbages piled near her front door for her family to take.

When there isn’t time to cook, she eats Corn Flakes for lunch at 2:30 in the afternoon.

Her apartment is often silent these days but sometimes, she can still hear the “Donkey Kong” theme song, one of Eric Garner’s favorite video games as a child.

She remembered how he would always say he was having “a few friends” over to play “Donkey Kong,” and she’d come home to find an apartment full of hyper boys.

“Everybody was his friend,” she said in a teasing tone. “Even when he got older, he never said that’s my associate, or that’s my coworker. Everyone was always his friend.”

There is a corner in her apartment dedicated to Eric Garner memorabilia: his last toothbrush, bottle of lotion, medicine, and respirators. A portrait of his son, Eric Garner Jr., who is currently in college, hangs to the left.

“He was very dedicated to his children,” Carr said. “He didn’t always do the right thing … sometimes he sold cigarettes, but the money went home and bought them clothes.”

Now is the waiting period, the calm after the storm. She waits for Judge William Garnett to decide whether or not he will release the grand jury records from Eric Garner’s case so that the family and the public can see exactly what evidence was heard. In New York the proceedings happen behind closed doors, but Garner’s case has a lot of people questioning this policy.

Expectations are high, especially after New York State Chief Judge Jonathan Lippman proposed a plan to lessen the secrecy of grand jury proceedings during his State of the Judiciary address on Feb. 17.

But it remains to be seen if the proposal will pass in Albany.

Carr carries a set of business cards that say “ERIC GARNER’S MOM.” She is prepared to give them out when the weather is warmer and marches resume.

There is a deep, distant look in her eyes when Carr is left alone, or when people talk about his death.

Carr’s husband, Benjamin Carr, is doing all that he can to help her pass the time.

“We joke a lot to keep her mind strong, make her smile,” Benjamin Carr said. “That’s the main thing.”

He encourages her to leave the apartment to visit Cynthia Davis, a good friend who started an Indiegogo crowdsource fundraiser specifically for Carr.

Davis is president of the Staten Island chapter of the National Action Network, a civil rights organization founded by the Rev. Al Sharpton.

During the drive to see Davis, Benjamin Carr keeps the radio on despite a long string of commercials.

Perhaps it was to avoid a silence that segues to sad thoughts.

They say nothing to each other as they drive by Victory Blvd. and Bay St., where Eric Garner passed. The voice from the radio prattles on.

“Sometimes I wonder,” Carr said. “How am I still standing after all of this?”

“When I’m alone … it’s like he and I be talking,” she said. “I talk to him. I tell him everything is going to be all right.”

CORRECTION: An earlier version of the article incorrectly attributed R. L’Heureux Lewis-McCoy as an assistant professor. He is an associate professor. Epoch Times regrets the error.