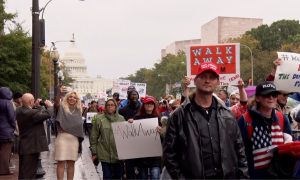 Individuals Join Together to 'Walk Away' From Democratic Party
0 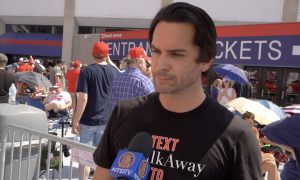 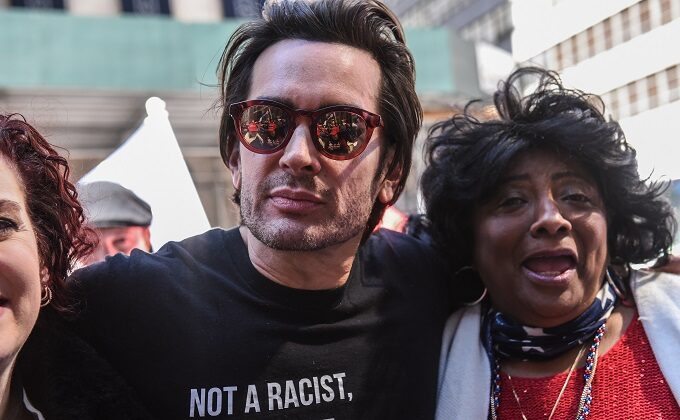 The ‘UnSilent’ Movement Wants to End America’s War With Itself

William Golding, “Lord of the Flies”

In America, a never-before-imagined invisible weapon has severed human bonds we never dreamed we would lose.

The stories documenting this have been gathered in the thousands by Brandon Straka, founder of the #WalkAway movement for former liberals who have decided to leave the Democratic Party.

On the #WalkAway social media portals, Americans relay the most shocking stories of being attacked, shunned, disinvited, disinherited, fired, slugged, bullied, disowned, and even divorced, because they either voted for Trump or began to distance themselves from a militant culture of hate.

Those videos put out by the Trump campaign, with red-adorned masses streaming by the thousands between barriers in hopes of getting into one of his rallies suggest triumph, but they conceal a great and possibly mortal wound we have somehow inflicted on ourselves: We’ve lost our decency, along with our shame.

The militants in the media, and at American colleges, have brainwashed and induced people into making Trump aversion a more important value than love of family and friends.

Most of us have stories of heartbreak and loss. From the accounts compiled by Straka:

“I lost my closest friend of 30 years when he learned I voted for Trump.”

“My best man blocked me, and asked me never to contact him again.”

“My sister didn’t invite me to Thanksgiving.”

“My son called me a Nazi [expletive] and disowned me.”

“I was renting a room and my landlady looked me up and said I had to leave immediately. She even cut off the internet so I couldn’t post any content.”

“My son came home from school with a broken arm. He was beaten up on the school bus because he supports the President.”

Straka said: “I’ve heard of marriages breaking up over Trump. I’ve heard thousands of stories. People come up to me with tears in their eyes, telling me about family, friends and colleagues who have attacked, ghosted, shunned, and even physically attacked them. We have to put a stop to this.”

So who or what did this to us? The media was only the message. The killer was, is, and always will be political correctness, which displaces natural feelings for political feelings, and strips its followers of real empathy in exchange for implanted values. The values of the state seeking final, invincible power.

I am a native New Yorker. All of my adult life, he was just “Trump.” His gilded buildings were hard to miss. We went skating at his skating rink and maybe watched “The Apprentice.”

Then suddenly in 2016, he was spectacularly re-branded by the pack-dog media as Hitler, Mussolini, and the KKK combined. The first American despot, dictator, tyrant, racist, or, as Bernie Sanders recently said, “The most dangerous President this country has ever had.”

Breathtakingly, this was said on the same day Project Veritas released video of a Sanders field organizer promising mass executions and re-education camps for Trump supporters.

As though we were dropped into a frightful video-game, the goal is to “destroy” Trump by punishing—or destroying—his proxies: Everybody who voted for him, and if it happens to be your mother or brother, so be it. The “killings” must continue in perpetuity, so that Trump is never “normalized.” Every conversation, every person in interaction with every other person, is now weaponized.

Maybe we should call it “The New Cold War.” What is it we’re fighting over, really?

Not “racism,” not Trump, not even globalism versus nationalism. At its base level, this is war between groupthink on the one hand and individualism on the other. If you think people who think differently than you should be penalized, attacked, and finally eliminated, then it is you, not Donald Trump, who is “dangerous.”

You are more dangerous than you will ever know. People thinking their own thoughts are all that stand between freedom and tyranny, democracy and hell on earth, as George Orwell depicted so vividly in “Nineteen Eighty-Four,” as William Golding depicted in “Lord of the Flies,” and Anthony Burgess in “A Clockwork Orange.”

Lifelong friendships are breaking like glass. Tolerance of people’s differences is no longer the norm, it’s looked down upon; it’s not revolutionary. The new normal is to ruthlessly “kill” each other off via social media, or email, and never look back.

The ones “executed” are always the Trump supporters—the Trump-haters are the ones with the weaponry, and the tyrannical impulse. Nobody ends a friendship after reading up on the crimes of the Clinton Foundation, or the deep state; it only works in reverse.

What sonic weaponry did the Soviets ever invent that could cause your grandmother to turn her back on you, or the best man at your wedding to terminate your friendship on Facebook?

“The good news is, though,” said Straka, “that all these walking wounded people who come over to me at #WalkAway events—and these are people often who never voted for a Republican in their lives before Trump—their tears are also tears of hope. They say that my standing up against the lies and violence on the left gave them the courage to do the same.”

“Quite a few people talk about the heartbreak coming out of the holidays. Many of them chose to not even go to family holiday get-togethers at all, because of the hate mongering,” said Linda Forsythe, founder of the conservative citizen news network C-VINE.

“There are others who do go, but say, ‘OK, we won’t talk about politics at all.’”

“But there is one thing that seems to come up over and over again. Many people are supporters of our country, our Constitution, our freedom, and what we were meant to be from our founding fathers, but are afraid. They’re afraid to say anything. Afraid of losing their job, of losing clients, losing business, and alienating family members. This is the so-called silent majority.”

Americans are hurting in silence—being punished, in a sense, for love. Love of country (and borders), love of president, love of the Constitution, and of the founding idea of this nation, which is freedom. Yet people have lost their “standing” in families and communities, branded as “fascists” who must be punished and purged—a deeply communist concept.

At the same time, we see signs everywhere that say, “Hate has no home here.” Or, the ubiquitous Pride slogan: “Love is love.”

That’s code for: Certain progressive ideals are protected; certain sexual choices and identities are protected. It also means: “We hate every Trump supporter, and anything that happens to them is their own fault.”

“Thankfully, #WalkAway has given almost half a million people a place to express their thoughts and opinions without fear of being bullied and ostracized,” said Cyndi Wall, one of the site’s moderators.

She quoted a particularly sad post from somebody who wrote: “There are a number of us, I imagine, who do NOT have people to spend the holidays with. Families not together for Christmas? Chanukah? New Year’s? So much suffering over opposing political opinions! It would be unbelievable if it were not for people actually living through it.”

Wall said: “This group isn’t going anywhere, and in fact, its membership is growing exponentially. Why? Because the hate stirred up in and through the Democrats is the fuel moving us to victoriously #WalkAway.”

In response to this social tyranny, and to help the “silent majority” who are afraid to say they support Trump feel emboldened, Straka launched a new campaign on Jan. 16, called “UnSilent,” leading up to a March on Washington in October.

A video clip opens with #WalkAway’s Mike Harlow tearing a piece of silver tape from his mouth, and features dozens of Americans of all races, ages, sexual orientations, including sitcom star Roseanne Barr, simply saying the word “unsilent,” with determination in their eyes.

“It’s time for the silent majority to become unsilent,” Straka says at the end of the clip.

I pressed Straka for how Americans are coping with these painful experiences.

“This is what has been revealed to me, and it’s fascinating,” he said. “I think it’s human nature to want to stand up for what you truly believe in. All of these people, what they have in common is, it would be easier for them to simply placate liberal ideology so that their kids would come home and they would have a happy Christmas and happy holidays and things like that.

In the classic “Obedience to Authority,” written in the early 1970s, Stanley Milgram observed, “Systematic devaluation of the victim provides a measure of psychological justification for brutal treatment of the victim and has been the constant accompaniment of massacres, pogroms, and wars.”

“Of all moral principles, the one that comes closest to being universally accepted is this: one should not inflict suffering on a helpless person who is neither harmful nor threatening to oneself.”

May we rebuild an America in which cruelty against those who are politically “other” is once again a bad thing, as opposed to a virtue. Then, and only then, will America be great again.

Celia Farber is a Swedish American writer with a background in magazine reportage and investigative reporting. She has written for Harper’s Magazine, Esquire, Rolling Stone, and many more, and is a contributor to The Epoch Times.