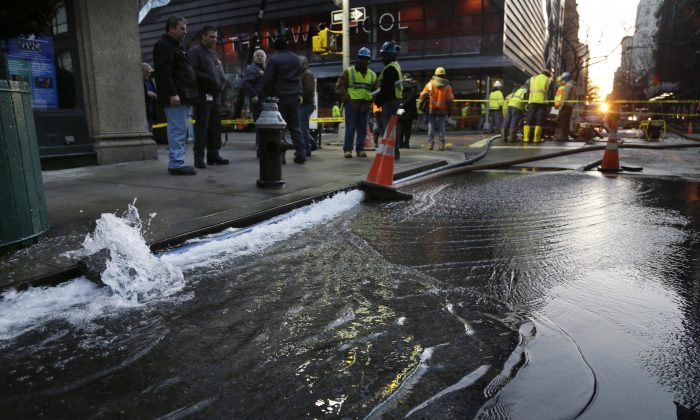 In this Jan. 15, 2014, photo water is pumped out of a hole in the middle of Fifth Avenue caused by a broken water main in New York. (AP Photo/Seth Wenig)
New York

The city of New York is like thousands of microcosmic communities that rotate around a few key places in a delicate balance of life.

There’s the subway, which almost everyone takes at some point, if not regularly. There are the oddly uniform bodegas with their small variety of basic groceries, large selection of scratchcards, and consistently mediocre coffee. There are the parks, where folks congregate in good weather. Then of course there are the apartment buildings, often tightly knitted together in neat rows fronting busy streets.

After last week’s explosion and fire in Harlem that led to the deaths of eight people and the destruction of two such buildings, a suspicion is that old pipes might be to blame in some way. As a result, people are taking a hard look at what keeps things running under the streets.

It’s long been an open secret that New York has a crumbling infrastructure the likes of which would make most other municipalities blush. Take the crumbling, decaying shame of a subway station at Chambers Street. The station’s black mold-coated peeling chips of paint falling off the ceiling and the rats’ nests of dangling electrical wires are enough to shock the most desensitized of city dwellers.

Just blocks away sits the magnificent, perfectly manicured edifices of several City Hall buildings, the Municipal Building, and the federal courthouse. What, I wonder, do those city fathers and mothers think of their decaying metropolis?

Maybe they should consider an example that happened years before last week’s Harlem blast.

In 2007, a water pipe burst near Manhattan’s Grand Central Terminal, exploding through the sidewalk and killing one person. Afterward, the city council formed a task force to look at infrastructure. Their recommendations, published in 2010—almost two years before Superstorm Sandy—included ideas to flood-proof, update, and upgrade the city.

One fact they pointed out was that New York’s expected growth means a population of 9 million by the year 2030. That’s worrisome when you consider the context of an already aged, groaning infrastructure.

“To permit the City’s new residents to travel to and from their work, to provide them with reliable and clean energy to power their homes and offices, and to assure that the air they breathe and the water they drink are clean and healthy, will also require significant new and upgraded infrastructure in a city whose transportation, power, and water systems were largely constructed almost a century ago,” stated the report.

A century of living anywhere causes serious wear and tear. That goes double for a town as busy and rough as this one, though.

Over time, New York has grown up around, under, and above itself with more buildings, trains, and skyscrapers. Along the way, we have picked up a laundry list of decaying pipes, crumbling buildings, squalid subway stations and tunnels, rotting pier pilings, and often roughshod streets.

Even in the face of scientific data and bitter experience, things don’t change. Mishaps (like small sinkholes), minor disasters (like a water main break and flooding in a major intersection), and tragedies (like the Harlem explosion) continue.

The inattention to New York’s aging infrastructure could be a laughingstock, if it wasn’t such a crying shame.