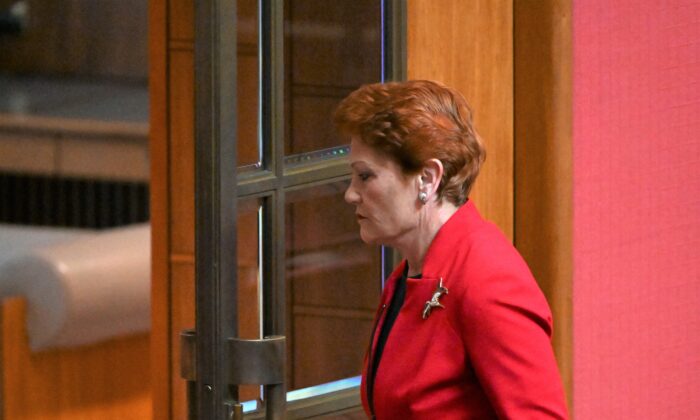 One Nation leader Pauline Hanson walks out after reacting to President Sue Lines's acknowledgement of country in the Senate chamber in Canberra, Australia, on July 27, 2022. (AAP Image/Mick Tsikas)
Viewpoints

Senator Pauline Hanson has not been a stranger to controversy in her political career.

In August 2017, she dressed in a burka as a means of focusing on the discrimination suffered by Islamic women in Australia. It generated a furious response by the then attorney-general, Senator George Brandis, who sharply rebuked Hanson’s action and described her display as a disgusting exercise that trivialised the views of Australia’s Islamic population and disrespected the Senate.

Now, the media have reported that Hanson “stormed” out of the Senate during the “Acknowledgement of Country” ritual—also known as the Welcome to Country ceremony.

The One Nation leader has since explained that leaving the chamber was the only way to voice her disapproval of this practice, which started in 2010. Lidia Thorpe, a Greens Senator, promptly labelled Hanson’s action “ignorant and racist.” However, these strong words need to be placed in perspective.

“Ignorance” refers to a person’s inability to understand the purpose of the ritual. In this context, it could be argued that Hanson’s action is merely a response to a form of preferential treatment imposed on all Australians, regardless of their views on the matter.

These days, it is near impossible to attend any function where the ritual is not mechanically and often insincerely performed. It has even entered sporting events, which should be free from any political interference.

For example, before the start of the friendly soccer game between Manchester United and Aston Villa, played recently in Perth, the game was preceded by a Welcome to Country ceremony led by an Aboriginal elder. The players were clearly amused by the spectacle and may even have enjoyed the Welcome as a cultural expression rather than as a political statement.

The Problem With ‘Diversity’

Currently, though, there is concern that the Welcome has now become an initiative that, potentially, could perpetuate “racism” and erode the promise of equality for all Australians regardless of their race.

Indeed, Hanson’s action insinuates that the ritual, rather than bringing Australians together, actually drives them further apart. There is also anecdotal evidence that, increasingly, non-Aboriginal Australians are starting to feel aggrieved because the Welcome to Country implies that they are merely visitors who are trespassing on Aboriginal land.

To honour the promise and expectation of equality, regardless of a person’s race, should be the aim of a decent, civilised society. Instead, Australia appears to be descending into the quagmire of institutionalised racism.

Of course, as the Welcome to Country is a cultural expression of identity, it has a place alongside other cultural expressions, for example, Greek or Croatian folk dancing or Chinese dragon dancing enjoyed by people during a multicultural festival.

However, the Acknowledgement of Country now follows the reading of the Lord’s Prayer in the Senate. But interestingly, in another development, the new president of the Senate, Sue Lines, who admits to being an atheist, does not want to read the Prayer and has proposed abolishing the practice.

There is a motion before the Senate to remove this reading of the Lord’s Prayer, which has been part of the Senate’s work since 1901. Lines’ proposal brought a response from Independent Senator Bob Katter, who described the Prayer as a humble admission “that there is something bigger than me, but in sharp contrast, the persecutors believe that there is nothing bigger than themselves and their opinions.”

Lines argues: “If we are genuine about the diversity of the Parliament, we cannot continue to say a Christian prayer to open the day.”

Unfortunately, Lines’ reasoning is superficially appealing, but it fails for the very reason offered for its abolition, namely, that it offends against the concept of “diversity.”

Indeed, the abolition of the Lord’s Prayer does not serve the interests of “diversity” by excluding Christians, who still represent a sizable portion of Australian society.

Ritual and the Prayer

So, what is the difference between the Acknowledgement of Country ritual and the proposed abolition of the Lord’s Prayer? The Lord’s Prayer is embedded in the history of the Senate and is compatible with the exhortation in the Preamble to the Australian Constitution, which refers to people “humbly relying on the blessing of Almighty God.”

The Constitution acknowledges that Australia is a Christian country, the foundations of which are now being undermined to support a nihilistic, relativistic way of life. In contrast, the Acknowledgement of Country is a ritual that could have the effect of dividing the country.

The Senate president is thus happy to acknowledge the Ngunnawal and Ngambri people as the traditional custodians of Canberra but is inclined to remove the Lord’s Prayer.

The language used in the Acknowledgment of Country demands politicians “to pay respect to elders past, present, and emerging.” While there is nothing wrong with an exhortation to respect people, respect is a trait that nevertheless has to be earned through achievements, contributions, and dedication, but not simply by being a member of a preferred race.

In Australia, there are capable leaders who refuse to take on managerial roles because they would be obliged to perform the ritual. Hanson, sensing a growing concern in society that the Welcome to Country is a charade that has been taken too far, reacted by leaving the Chamber.

The Senate is also due to consider a motion to permanently display the Aboriginal and Torres Strait Islanders flags in the Chamber alongside the Australian flag. These flags are already on display in the House of Representatives. This is a knee-jerk reaction to placate the estimated 3.2 percent of the population, who are self-identified as Aboriginal or Torres Straits Islanders descent.

The events which occurred in the Senate indicate that a society that favours one group over another is in slow decline. Hanson’s action is thus a timely reminder that the Acknowledgement of Country ritual if forced upon people against their will, will accelerate this decline.