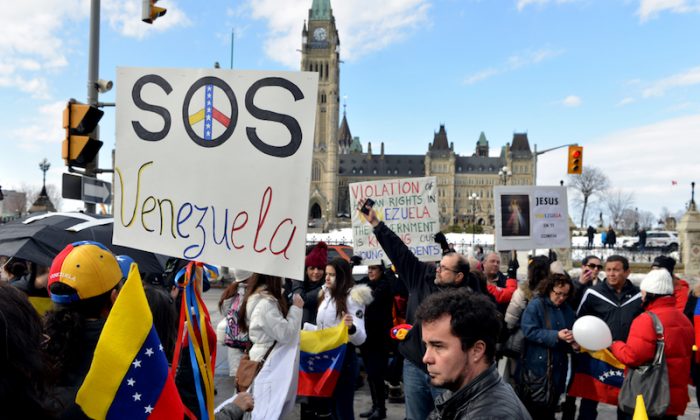 The Unravelling of Chavismo?

One of the most difficult jobs we have as analysts of political economy is cutting through the fog of debates that are polarised between seemingly irreconcilable viewpoints.  The unfolding crisis in contemporary Venezuela presents us with just such a conundrum.  Since early February, there have been waves of protest against the Maduro government, with a number of people so far dead, a prominent opposition member, Leopoldo Lopez, now in custody having surrendered, and three US consular officials expelled from the country.

For critics of the Bolivarian Revolution, the main lines of argument have been well rehearsed: a populist regime with a creeping tendency towards military authoritarianism has corrupted the state; presided over a dysfunctional economy in which oil rents are diverted to its enormous client base amongst the urban poor; consciously armed militias to police the revolution by systematically terrorising the wider population; and turned a blind eye to the explosion in crime and violence.

For its supporters, though, the Bolivarian Revolution is something else: a genuinely revolutionary process of change bringing with it massive upheaval of a deeply corrupt and elitist order and necessarily provoking a backlash from powerful vested interests that seek to resist its logic.  By distributing resources to the poorest – and pre-Chávez, they were very poor indeed – Venezuela has made huge advances in almost every measure of development, all of this carried out, what is more, by a government with greater electoral legitimacy than many others globally.  The current crisis, on this reading, is little more than an attempted ‘neo-fascist’ destabilisation led by the Venezuelan right-wing elite in tandem with US security agencies, redolent of the failed imperialist coup of 2002.

However, this is not 2002.  In fact it’s getting on for two decades since Hugo Chávez first swept to power and much has changed since then. To understand this, we need to cut through the hyperbole and consider instead the deeper political economy of contemporary Venezuela.

Many facts are not in doubt. The most obvious success of Chavismo was the enfranchisement of large sections of the previously abandoned.  Rafts of progressive social policies have seen spectacular and unprecedented improvements in the poverty rate, literacy, maternal health, life expectancy, child malnutrition, equality (including gender equality) and GDP per capita.

But these changes have been accompanied by significant costs.

First, mismanagement of the national oil company, PDVSA, has seen production plummet by as much as 20% over the decade.  This matters, since oil still accounts for around 95% of exports, with dependence on energy rents having essentially strangled attempts at economic diversification.

Second, inflation has been rampant.  I was in Venezuela in 2011: the official Bolívar-US$ exchange rate was 4.3 to 1, with the black market rate hovering around twice that.  In early 2013, the official rate was devalued to 6.3, yet by Christmas inflation was running at 56% and US dollars were changing hands for up to 50 Bolívares.  Today, the official rate is approximately 11.7, but it takes as much as 87 Bolívares to buy a single Greenback on the black market. This has led to some bizarre effects; for example, those with access to dollars – including much of the Chavista elite – have been able to finance living standards many times greater than would otherwise be possible.  Yet international airlines are suspending flights because the government has not honoured payments for tickets purchased in dollars, and foreign exchange reserves have halved from US$40bn in 2008 to around US$21bn today.

Third, there is the question of violence. Venezuela is today ‘the most weaponised country in the world’, recording 24,000 murders in 2013 alone. Since Chávez came to power in 1999, a staggering 200,000 people have been murdered, a statistic which bears comparison with Iraq. And all are vulnerable: in January 2014, there was an outcry after Mónica Spear, a former Miss Venezuela, and her husband were brutally murdered in a robbery.

Consequently, the country in 2014 really is very different – both for better and worse – to the one that Hugo Chávez inherited and so forcefully reshaped.

A key problem is that, in so dramatically empowering the poor, Venezuelan populism has necessarily been predicated upon the simultaneous disenfranchisement of another significant swathe of the population.  In 1999, when this group was principally a small, reactionary and bourgeois elite, this was perhaps not so problematic.

But today this is not the case. The people demonstrating against the government constitute a broad church, led by students for the most part, but also apparently including some from poorer neighbourhoods. Moreover, President Maduro himself enjoys distinctly less legitimacy than did Chávez; he was only elected in 2013 on a wafer-thin majority, with the country effectively split between him and the opposition leader, Henrique Capriles.  And the three issues highlighted above – economic decline, the collapse of the currency and widespread violence – do not discriminate: they terrorise the poor and lower-middle classes too.

This is something that, uniquely, I get to witness living in Trinidad, just seven miles from Venezuela across the Gulf of Paria and home to thousands of émigrés from Caracas, who are part of an ever-growing exodus.

These people – some of whom are my friends – are, perhaps unsurprisingly, not members of a neo-fascist elite.  They are just everyday working and professional people who have come to Trinidad in search of opportunities and personal security.  They acknowledge many of the social achievements of Chavismo, but they angrily reject its downsides.  Many believe they will never return home to live again; they watch as their parents’ savings evaporate; they recount tales of vicious ‘kidnap express’ robberies inflicted on their terrified friends; and when they go to Caracas to visit – assuming that they are able to find a ticket on a ghost flight – they travel laden with suitcases full of toilet rolls, toothpaste and, remarkably, imported corn flour from Venezuela.

For a long time, I felt that the benefits of Chavismo outweighed the negatives.  But I’m increasingly coming to a distinctly less sanguine view.  We are now potentially witnessing the opening chapters in what could be a long and painful denouement of the Bolivarian Revolution. Amidst the screaming on either side of the debate, what Venezuela really needs is balanced analysis, skilled leadership and thoughtful compromise to manage the transition, repair the economy and stitch together a heavily fractured society.  It barely needs saying that, today, the space for such intellectual and political reconciliation looks extremely limited.