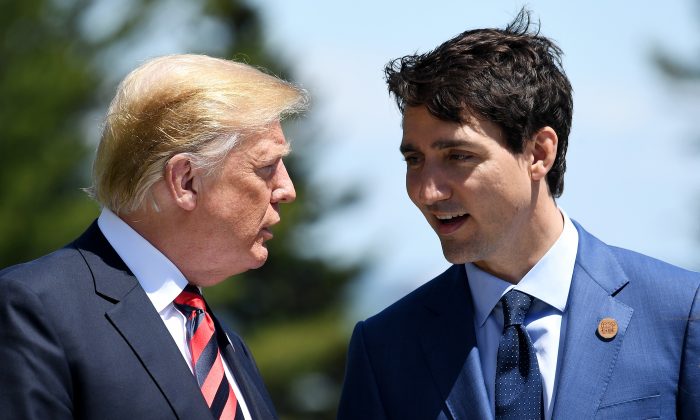 The United States, Canada, and the Tariff War

The U.S.–Canada bilateral relationship has often been described with the hoary maxim that “we are best friends—like it or not.” (With “not” often ascendant.)

But more realistically, it is economics that defines our relationship—or, perhaps more accurately, struggles over “free trade” and its restrictions. Such arguments have dismayed diplomats and enriched trade lawyers and business experts for decades.

The defeat of the Tories—and Chretien’s implicit promise to revise (at a minimum) NAFTA—disconcerted Washington. Timely, high-level diplomacy in Ottawa, however, provided reassurances that any requested adjustments would be tertiary, not terminal—and Washington breathed again.

Congressional approval, however, was no cakewalk. In the 1992 election, Independent candidate Ross Perot charged that NAFTA created a “vast sucking sound” of jobs going to Mexico to exploit low wages and weak labor protection. Ultimately, more Republicans than Democrats supported NAFTA, which went into effect Jan. 1, 1994.

In September 2015, presidential candidate Donald Trump called NAFTA “the single worst trade deal ever approved in [the United States]” and promised to, if elected, “either renegotiate it, or we will break it.” Swarms of economists countered with “sky is falling” predictions should the United States leave NAFTA.

In July 2017, however, Washington introduced demands for changes to NAFTA that would reduce U.S. trade deficits, limit Canada and Mexico’s ability to appeal U.S. restrictions, and drop limits on the United States’ ability to increase import restrictions. Subsequently, Washington added a five-year “sunset” clause for NAFTA—which Canadians immediately rejected as discouraging investment without assurance an agreement would continue.

With multiple negotiating rounds desultory rather than definitive, on March 8, Trump announced 25 percent and 10 percent worldwide tariffs respectively on imported steel and aluminum—with (temporary) Canadian and Mexican exemptions—depending on the negotiation process. On May 31, he shed the gloves and instituted tariffs—prompting clamor about retaliation. And on June 1, he suggested possible separate Canada and Mexico trade agreements—a trial balloon Canadian officials immediately punctured.

Trump’s actions are almost universally excoriated—notably by those predicting doom for their living. Volleys of studies insist tariffs (and retaliation) will cost up to 300,000 jobs and will extensively damage international trade.

Trump met other G-7 members in Quebec on June 9 and 10, hosted by Trudeau, but ultimately declined to sign an already agreed upon communique or change his position on tariffs.

Trudeau then doubled down, again insisting Canada was independent and would not be bullied. Whether such was necessary, let alone wise, is debatable.

In any event, it infuriated Trump, already Singapore bound for unprecedented meetings with Pyongyang’s leader Kim Jong-Un—negotiations considerably more important than the G-7. Trump felt disrespected by Trudeau’s shin-kick after, reportedly, he privately agreed to drop the five-year “sunset” proposal. Trump’s response was ad hominin and intemperate—followed by nastier insults by staffers whose only excuse might be exhaustion/frustration (a heart attack subsequently hospitalized one).

Thus far, Trump is not for turning. The tariffs are designed to placate Trump’s base before November’s midterm elections (“promises kept”), and hypothetical “sky is falling” consequences (even if accurate) would not yet be evident. This contretemps is only the latest in historical struggles over what trade should be “free” and who should pay. The ongoing hissing/spitting will eventually be resolved, leaving bad feelings on both sides.