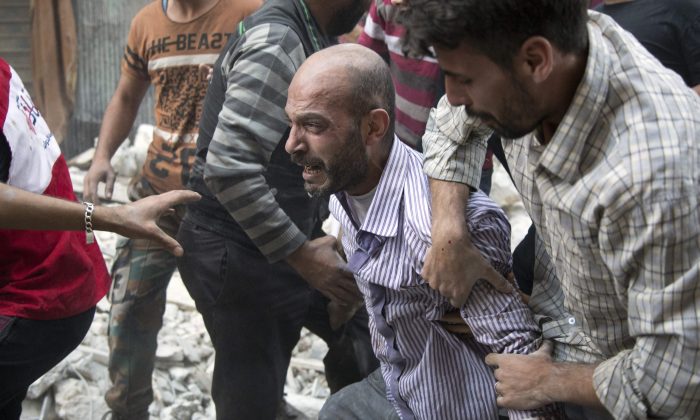 A grief-striken Syrian man is comforted by people as rescuers pull the body of his daughter from the rubble of a budling following government forces air strikes in Aleppo on Sept. 27, 2016. (KARAM AL-MASRI/AFP/Getty Images)
International

The Unintended Consequences of Restrictions on War

Syrian government forces, backed by Russia, broke a cease-fire on Sept. 26 and bombed rebel forces in eastern Aleppo. The airstrikes were allegedly carried out with little regard for civilian casualties, using incendiary bombs that set buildings ablaze and bunker-buster bombs that destroyed underground hospitals.

The United States, meanwhile, has been playing by the book in how it conducts bombing operations against the ISIS terrorist group. Yet, its inability to get boots on the ground to identify targets in ISIS-held territory has largely prevented the United States from using airstrikes beyond the ISIS front lines, for fear of missing the mark and striking civilian targets.

The two approaches highlight one of the key issues in the war against ISIS and the war between the Syrian government and rebel forces. While the United States is trying to follow the rules, other actors in the war are following their own rules.

While the tactics used by Russia and Syria, in particular, have been devastating yet effective, the United States is struggling to keep pace.

Russia has been playing us like a fiddle.
— Drew Berquist, counterterrorism expert

“I think, first of all, Russia has been playing us like a fiddle,” said Drew Berquist, a counterterrorism expert for the U.S. intelligence community and founder of OpsLens, a website that provides daily commentary on national security issues. “Putin has just been pushing buttons, knowing we’re not doing anything as far as response.”

Berquist said that during his recent deployment in Kurdistan, with his former role as an intelligence contractor helping U.S. efforts to fight ISIS, he missed Thanksgiving dinner because Russia launched missiles over an airport in Iraq, which forced it to ground flights due to security protocol.

“They actually did it again two weeks ago,” he said, referring to Russia launching missiles to ground Iraq’s military flights.

Many of the problems faced by the United States in the fight against ISIS, he said—both in Syria and in Iraq—are tied to the “air-only” strategy the United States has taken, as opposed to using a strong ground force. If the United States were to go after ISIS “full bore” with troops on the ground, he said, “militarily speaking, we would still crush them.”

One of the most difficult problems the U.S. air-only strategy faces is that in order to strike targets in ISIS-held territory, it needs to get eyes on the ground to confirm whether the targets are actually enemies—for example, being able to confirm whether a building is an ISIS command center or a hospital.

This has caused a lack of information coming from within ISIS-held territories, which has turned the regions into virtual blind spots that the United States is unable to strike due to protocols for avoiding collateral damage. Berquist said the United States will often back off from an attack that could harm civilians “even if it’s a really good target.”

The slow and relatively light approach has had its repercussions. “Not only are we allowing them more time to inspire, train, and develop operations, but we’re also letting this refugee crisis fester,” Berquist said. “That cascades into just a whole other list of problems. When refugees flee, they go through Turkey; and there are pockets of ISIS all throughout the country” that, he said, can radicalize or infiltrate refugee groups.

He said there have been times when U.S. forces alerted Iraqi forces of possible ISIS-held areas, and would find out later that the Iraqis had bombed an area without first confirming.

Regarding the recent bombings in Aleppo by the Syrian government, Berquist said it’s possible that Russia—while it is far less discerning in its targets than the United States—has found itself in a similar position to the United States, where its local ally is often reckless.

While Russia likely doesn’t want the bad press coverage, Berquist said that “they also like being in the spotlight,” where they’re seen as a strong global power. On the other hand, he added, “I think they’re having fun with challenging the United States right now—just seeing how hard they can push us.”