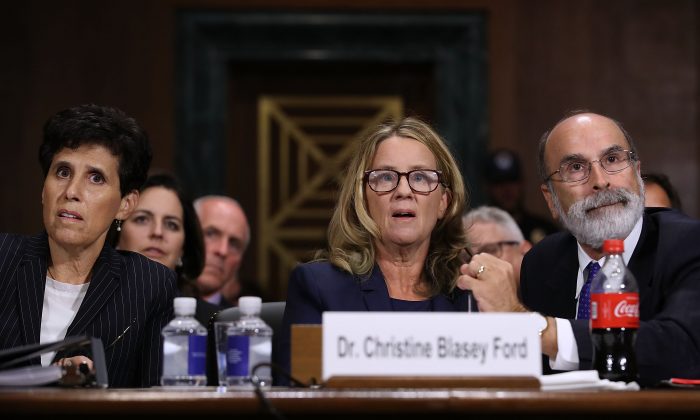 Christine Blasey Ford (C) is flanked by her attorneys, Debra Katz (L) and Michael Bromwich, as she testifies before the Senate Judiciary Committee in the Dirksen Senate Office Building on Capitol Hill in Washington on Sept. 27, 2018. (Win McNamee/Getty Images)
Viewpoints

On Oct. 2, 2018, Senator Grassley (R-Iowa) sent a letter to the attorneys for Christine Blasey Ford—who has publicly accused Judge Brett Kavanaugh of sexually assaulting her while in high school—with a request for material evidence in three specific areas. The first request pertained to “notes from therapy sessions in which Dr. Ford discussed the alleged assault.”

In his letter, Grassley noted that some of these notes have already been provided to The Washington Post, thereby invalidating Ford’s attorneys’ claims of “private, highly sensitive information” as the reason for not providing the evidence.

Grassley’s second request relates to previously requested audio and video recordings made in conjunction with the polygraph examination of Ford. Grassley also made a request for any and all materials relating to Ford’s allegations against Kavanaugh that were provided to “any reporter or anyone else at a media organization.”

Grassley’s second request regarding information related to the polygraph exam appears particularly noteworthy. Grassley noted that the Judiciary Committee has received a “sworn statement from a longtime boyfriend of Dr. Ford’s, stating that he personally witnessed Dr. Ford coaching a friend on polygraph examinations.”

Ford had been specifically questioned under oath by career sex-crimes prosecutor Rachel Mitchell regarding any discussions or tips given or received in regard to a polygraph. From her testimony:

MITCHELL: Have you ever had discussions with anyone, beside your attorneys, on how to take a polygraph?

MITCHELL: And I don’t just mean countermeasures, but I mean just any sort of tips, or anything like that.

FORD: No. I was scared of the test itself, but was comfortable that I could tell the information, and the test would reveal whatever it was going to reveal. I didn’t expect it to be as long as it was going to be, so it was a little bit stressful.

MITCHELL: Had—have you ever given tips or advice to somebody who was looking to take a polygraph test?

The sworn statement sent to the Judiciary Committee by the ex-boyfriend of Ford was obtained by Fox News. In the letter there is a specific reference to preparation for a polygraph exam:

“Dr. Ford lived with Monica L. Mclean, who I had understood to be her life-long best friend. During that time, it was my understanding that McLean was interviewing for jobs with the FBI and the U.S. Attorney’s Office. I witnessed Dr. Ford help McLean prepare for a potential polygraph exam. Dr. Ford explained in detail what to expect, how polygraphs worked and helped McLean become familiar and less nervous about the exam.”

“I have NEVER had Christine Blasey Ford, or anybody else, prepare me, or provide any other type of assistance whatsoever in connection with any polygraph exam I have taken at anytime.”

As the Fox News article points out, Mclean was one of seventeen signatories to a letter of support for Ford from Holton-Arms School.

An article posted by the Conservative Treehouse contains an amazing bit of sleuthing on the background of McLean:

According to her LinkedIn background, Ms. Monica Lee McLean, was a 24-year employee of the Department of Justice and FBI from 1992 to 2016.  According to public records Ms. McLean worked in both Los Angeles, CA and New York, NY.

In a 2000 Los Angeles FBI declaration Ms. McLean describes herself as a Special Agent of the FBI, Associate Division Counsel, in the Los Angeles Division Legal Unit.

Sometime between 2000 and 2003, McLean transferred to the Southern District of New York (SDNY), FBI New York Field Office; where she shows up on various reports, including media reports, as a spokesperson for the FBI.

According to her LinkedIn profile, Ms. McLean retired from the FBI in 2016, after 24 years of work.

The article notes that McLean’s current address is listed as being in Rehoboth Beach, Delaware, and lists a 2016 article which includes a photograph of McLean at the Teller Wines Expo in Rehoboth Beach on April 2, 2016. This means that Ford may have written her letter while visiting McLean, who worked for the FBI and the Department of Justice for 24 years until her retirement in 2016.

All internet references to McLean appear to have vanished from 2010 onward.

As specified by the Conservative Treehouse, the location of Rehoboth Beach is particularly significant as can be seen from Ford’s testimony:

MITCHELL: The second is the letter that you wrote to Senator Feinstein, dated the—July 30th of this year.

MITCHELL: Did you write the letter yourself?

MITCHELL: And I—since it’s dated July 30th, did you write it on that date?

FORD: I believe so. I—it sounds right. I was in Rehoboth, Delaware, at the time. I could look into my calendar and try to figure that out. It seemed…

MITCHELL: Was it written on or about that date?

FORD: Yes, yes. I traveled, I think, the 26th of July to Rehoboth, Delaware. So that makes sense, because I wrote it from there.

Recall comments made in testimony by Ford regarding who she’d confided in:

MITCHELL: Who advised you to contact senators or The New York Times?

Media references to McLean appear to suddenly dry up after 2009. Any references to her work history disappear from this date until her retirement in 2016. References to her former spokesperson partner at the FBI, Margolin, continue to this day—including his statements in relation to the Prevezon case and former personal attorney to Donald Trump, Michael Cohen.

The Prevezon Case was prosecuted by U.S. Attorney Preet Bharara of the Southern District of New York (SDNY) which granted permission for a “Significant Public Benefit Parole” document on Sept. 25, 2015, to Natalia Veselnitskaya, allowing her entry into the United States.

Request for Identity of FBI Agent

The lawyers representing Ford—Michael Bromwich and Katz—sent a letter to FBI Director Christopher Wray and FBI General Counsel Dana Boente on Oct. 2. In their letter they noted something peculiar:

We have repeatedly asked you to identify the Supervisory Special Agent responsible for this investigation, so that we could contact him or her directly. We have received no response.

There might be good reason for not providing the identity of the FBI Supervisory Agent to Ford’s lawyers.

Bromwich’s selection as the most recent addition to Ford’s legal team may be specifically related to his long-standing ties into the FBI and DOJ. He is the attorney for former FBI Deputy Director Andrew McCabe and is uniquely positioned to benefit from McCabe’s remaining contacts within the FBI.

Bromwich was also closely affiliated with prosecutors within the SDNY—where McLean served as a spokeswoman.

For an excellent timeline of events see Senator Grassley’s Oct. 2, 2018, letter to other members of the Senate Judiciary Committee. The timeline begins following Grassley’s signatory page.