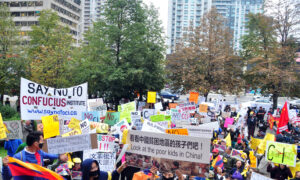 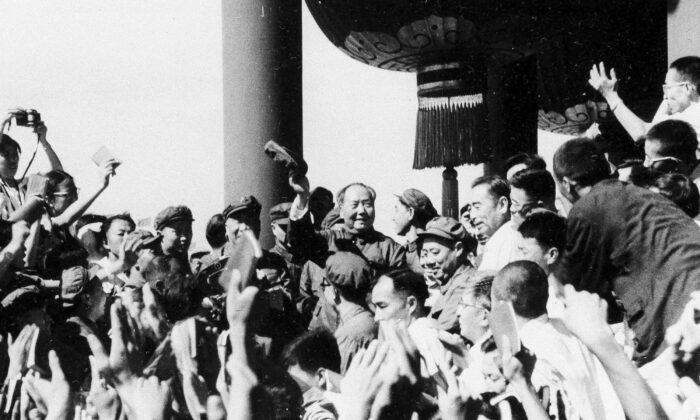 Chinese leader Mao Zedong meets with representatives of the revolutionary teachers and students from Peking and other parts of the country in August 1966. Mao launches the decade-long Cultural Revolution to reassert his authority. Schools are shut, youthful Red Guards attack political enemies, and intellectuals are persecuted or driven to suicide. (AP Photo)
Thinking About China

Le Figaro editor Jean-Baptiste Alphonse Karr wrote in 1849 that “the more things change, the more they remain the same thing.”

This is a phrase that today’s China watchers would do well to keep in mind as Beijing strives to present itself to the world as a new kind of “superpower” uninterested in altering global rules, organizations, and relationships beyond promoting worldwide infrastructure and economic development.

When the Chinese Communist Party (CCP) emerged victorious in the Chinese civil war in 1949, Mao Zedong launched the country into complete class warfare and extraordinary economic development schemes such as the Great Leap Forward that included backyard steel smelting. When that failed disastrously, Mao was forced by his leading comrades to pursue more conventional development methods. For a time, that worked reasonably well, and the Chinese economy began to grow again. But Mao was not only interested in creating economic growth. He wished to create a new kind of person, a completely new type of society, indeed, a new civilization. In pursuit of this, he launched the Great Cultural Revolution.

This revolution sought to turn ancient and conventional relationships, customs, attitudes, morals, and modes of thought inside out. Those who resisted were pilloried, tortured, and killed. Finally, Mao died in 1976 and Deng Xiaoping became a supreme leader who brought more practicality to the job. He famously argued that whether a cat was white or black made no difference so long as it caught mice. Rather than trying to cross rivers by jumping over them, Deng advised to cross by feeling the stones.

This practical way of thinking led Deng and his small cadre of top leaders to consider opening the Chinese economy to foreign investment and production by foreign corporations in China. The decision was controversial. Many of Deng’s Communist Party leaders warned that “opening the windows would allow flies to come in.” Deng agreed that some flies might enter but convinced his team that they had enough fly swatters to handle any problem that could arise.

In the wake of this 1978 decision to open the Chinese economy, a flood of foreign investment and technology began to drive the country’s growth at record rates never seen before anywhere in the world.

By 1989, the Chinese economic miracle was well on its way to full realization, but flies had also begun to gather. Students who embraced economic liberalization began to call for political liberalization. Indeed, they built a replica of the Statue of Liberty in Tiananmen Square in the middle of Beijing and marched to demand a truly new China of free speech, rule of law, and democratic governance.

At this point, Deng concluded the flies had gotten out of control and had to be killed. Nothing, he argued, could be allowed to challenge the power of the CCP and its vision of “socialism with Chinese Characteristics.” He called in his top People’s Liberation Army (remember the army defends the Party not the country) generals to bring their tanks into Tiananmen Square and rid it and the rest of the country of these pesky democracy flies. Thousands of democracy supporters from around the country were killed.

After a pause, Beijing continued with reforms and opening up, and many political, business, and academic leaders in the free world became convinced that the Tiananmen Square massacre had been an unfortunate exception, and that China really was on a course toward capitalist, open markets and increasing political liberalization. This thinking was popularized by Francis Fukuyama’s book titled, “The End of History and the Last Man,” emphasizing that democracy and free market capitalism would rule the future. It seemed in the free world that China must inevitably become open economically and politically as well. This was seen to be only a matter of time.

Now, however, it is being made clear in Hong Kong, Xinjiang, the South China Sea, Taiwan, Australia, and elsewhere that the more the Chinese Communist Party changes, the more it remains what it always has been—a totalitarian despotism dedicated to erasing freedom of thought and conscience, and to replacing that with self-serving lies and falsehoods.