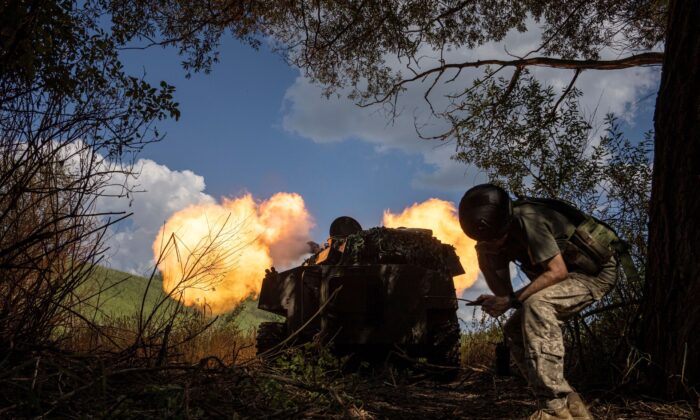 Five months after Russia invaded Ukraine, the war is now reduced to one of attrition. The current dirty, grinding slog is fought mostly with artillery and rockets. Everything from Ukraine’s shopping centers to apartment buildings—and the civilians in them—are Russian targets.

Most outsiders have already forgotten the heroic Ukrainian winter repulse of the botched Russian shock-and-awe effort to sweep into Kyiv, decapitate the government, and declare the eastern half of the country a Russian protectorate within mere days.

Months later, the long war devolves further into a contest of mass and weight—tons of explosives blowing up pathways for massed troops grabbing a few more charred miles of ruined landscape.

Russian President Vladimir Putin bets he can throw in more men and more shells than Ukraine and its Western suppliers can match. He is quite willing to “win” by laying waste to eastern Ukraine, even if it means losing three Russian soldiers for every Ukrainian.

When war becomes such gridlocked carnage, each side looks to new game-changing diplomacy, strategies, allies, or weapons to break the deadlock.

For Putin, such escalation means more flesh, steel, and explosives. His country is 28 times bigger than Ukraine, and more than three times more populous, with an economy 15 times larger.

As for Putin’s financial reserves, the Western oil boycott means increasingly little to him when 40 percent of the planet’s population in India and China are eager to secure near-limitless Russian energy.

Another 750 million people in Europe once talked tough. But as a second winter nears, their gas and oil imports from Russia will further wither. Then their Churchillian rhetoric may chill.

So the Ukrainian war increasingly will depend on endless U.S. aid and escalation.

It asks for more rockets and artillery to ensure tit-for-tat retaliation for every incoming Russian shell and bomb. Kyiv negotiates for more Western intelligence to take out more Russian generals and more lift capacity to stage airborne raids into Mother Russia itself.

We in the West abhor Putin’s war as senseless carnage, the last mad act of a vainglorious and delusional dictator.

Yet Putin trusts that future Russian generations will come to appreciate his grinding effort as the brutal restoration work of Vladimir the Great. When the wreckage is forgotten, Putin is convinced that he will be viewed as the world’s most successful irredentist—one who had already battered Georgia, Ossetia, Chechnya, Crimea, and Eastern Ukraine back into the reborn Russian empire.

If Putin can smash Ukraine into submission, the former jewel in the Russian imperial crown, then he thinks he can eventually swallow all the remaining former Soviet republics that are far less formidable than Ukraine.

The United States is nearing a gut-check decision. There are plenty of dangerous firsts in radically upping our role with Ukraine. No one quite knows the post-Cold War rules of engagement when one nuclear power openly fights the surrogate of another.

In the old days of the Soviet Union and a backward Maoist China, conventional American triangulation ensured that neither nuclear power grew closer to each other than to us.

After Ukraine, both nuclear powers are de facto allies, ganging up on a common American enemy. As global inflation spikes, recession looms, and oil prices soar, some of our sworn and de facto allies, including India and Turkey, prefer Russian oil to Western sermons.

The heroic Ukrainian resistance may have brought European NATO states and the United States closer. But oddly, Ukraine’s supporters seemed to have soured the rest of the world on Western economic boycotts and sanctions—and the torpid leadership of President Joe Biden and his European counterparts.

In the West, there are dissident rumblings of a possible plebiscite to adjudicate the Russian-speaking Ukrainian borderlands—with possible guarantees of an Austria-like, non-NATO neutrality for Ukraine.

But such compromise talk earns charges of appeasement from Western zealots. Apparently, American moralists intend to fight for the principle of the sanctity of national borders to the last Ukrainian.

Vastly upping aid to Ukraine has become the cause célèbre of the West. But few have fully explained the ensuing costs and dangers of escalation to the American people. The United States appears to be heading into a stagflationary recession following the loss of deterrence from the Afghanistan catastrophe and with restive renegades such as Iran and North Korea joining the Beijing–Moscow nuclear axis.

For now, no one knows whether greater American escalation would tip the balance for an allied democratic victory and a repeat of our savior role in the two World Wars. Or will the proxy war suck the United States into a Vietnam, Iraq, or Afghanistan-like quagmire?

Worse: Will our intervention trump even the brinkmanship of the Cuban Missile Crisis—with the nuclear standoff nightmarishly unpredictable?