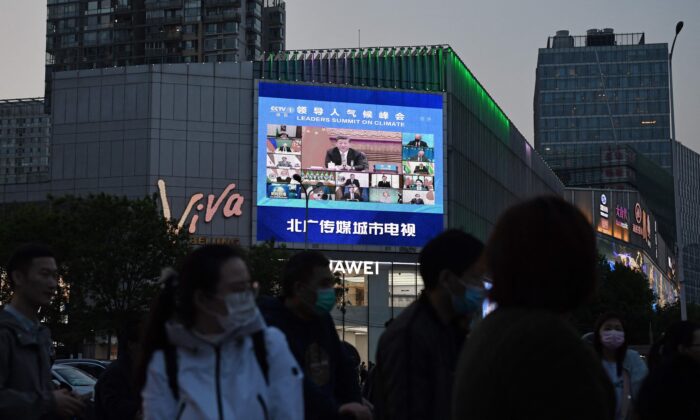 A news program report on Chinese leader Xi Jinping's appearance at a U.S.-led climate summit is seen on a giant screen in Beijing, on April 23, 2021. (Greg Baker/AFP via Getty Images)
Thinking About China

China will exploit the Russo-Ukrainian war for its own economic benefit. Any decreases in Russian oil and gas exports to Europe will likely be shifted to China.

The 2015 Paris Agreement pushed China into a corner to some degree. While other nations grandly announced their nationally determined contributions to reducing greenhouse gases, China demurred on specifics until near the end of the time allotted for countries to develop their plans.

The Chinese regime faced the dilemma of building ever more coal-fired plants needed to power Chinese industrial growth, while at the same time publicly championing green goals in order to keep its green technology production lines humming and exports of solar panels, batteries, and other items growing.

But then duplicity is a cherished trait of the Chinese Communist Party (CCP), particularly when money is involved. Cutting emissions takes a back seat to continuing economic growth in the CCP’s priorities.

Let us examine the issue.

To meet its Paris Agreement commitments, China has claimed to be on the “carbon neutrality” bandwagon since CCP leader Xi Jinping’s announcement in a speech to the United Nations General Assembly in September 2020.

“We aim to have CO2 emissions peak before 2030 and achieve carbon neutrality before 2060,” Xi said, as reported by the New York Post.

Achieving carbon neutrality requires that carbon dioxide emissions as a byproduct of industrial processes must be cut and/or equivalent amounts of emitted carbon dioxide must be “captured” and removed from the atmosphere in some way.

[As an aside, the premise that human-generated CO2 emissions are a key underlying cause of “global warming”—now referred to as “climate change”—is increasingly under assault based on real science. A new report, titled “World Atmospheric CO2, Its 14C Specific Activity, Non-fossil Component, Anthropogenic Fossil Component, and Emissions (1750–2018),” makes this unsurprising conclusion (emphasis added): “Our results show that the percentage of the total CO2 due to the use of fossil fuels from 1750 to 2018 increased from 0% in 1750 to 12% in 2018, much too low to be the cause of global warming.” In short, achieving carbon neutrality may very well be a fool’s errand.]

Are there any signs at all—other than the usual public declarations by the usual suspects—that China is actually living up to Xi’s promise? The clever CCP might institute a massive tree-planting endeavor in Inner Mongolia by indentured Uyghurs in order to claim that the new tree growth removes CO2 to balance out increasing industrial emissions, but maybe they are saving that propaganda line for later use.

According to a report quoted by The Guardian last April, any Chinese “nationally determined contributions” would have to include having to “shut down nearly 600 of its coal-fired power plants in the next 10 years, replacing them with renewable electricity generation, to meet its goal of net zero greenhouse gas emissions by 2060.”

Did the CCP pay any attention to that report? There is no known evidence that they even acknowledged the report’s existence.

To the contrary, as TIME reported in August 2021: “China is planning to build 43 new coal-fired power plants and 18 new blast furnaces—equivalent to adding about 1.5% to its current annual emissions.”

However, Xi did promise not to build any more coal-fired power plants overseas last fall, as reported in The Guardian. Was that part of the trade off in order to build more at home, or was that just more communist blarney?

By all appearances, any lobbying of China that President Joe Biden’s inept “Climate Czar” John Kerry may have done during his “negotiations” leading up to the Glasgow Climate Pact last December must have fallen on deaf Chinese ears.

From the Washington Examiner’s assessment of the pact: “The extremely vague language of the agreement requires nothing of China. It states only that both the U.S. and China will take unspecified ‘enhanced climate actions that raise ambition in the 2020s … in accordance with different national circumstances.’”

The agreement required “developed nations” to spend $100 billion on climate change mitigation activities, but that let China off the hook because the CCP still claims that the number two economy in the world is a developing nation. The CCP dodged yet another bullet with a few “future promises!”

There is even more evidence of China not living up to Xi’s carbon neutrality promise, as the ongoing Russo-Ukrainian war is exposing more of China’s green duplicity. China is an energy-poor country that is the world’s largest oil and gas importer, according to Forbes, with oil imports surpassing 10 billion barrels per day in 2019, according to the U.S. Energy Information Administration.

China imported 15 percent of its crude oil from Russia in 2019, as well as considerable quantities of natural gas and coal. Russian exports of hydrocarbons will continue to increase in the coming years due to the conclusion of these large export-import deals:

How will the above agreements result in Xi’s commitment to achieving “carbon neutrality” by 2060? The details of China’s new national climate plan announced last fall are of course silent on the above hydrocarbon agreements.

Will the Chinese play Germany’s game of claiming that natural gas is a “transition fuel?” No one should be fooled.

At any rate, the budding Sino-Russian alliance is going great guns on the hydrocarbon export-import front and will only increase as Russian oil and gas interests are further sanctioned as a result of the invasion of Ukraine. There will be more Russian oil and gas available for export to China as European Union countries and others (the United States?) will seek to reduce their dependencies on Russia. China will not turn down the opportunity!

While there was some earlier speculation that China might agree to the sanctions on Russia, “China’s banking and insurance regulator said on Wednesday [March 2] that the country opposes and will not join financial sanctions against Russia,” as reported by CNBC.

That opens the door for Russia to finance oil and gas transactions under China’s Cross-Border International Payments System (CLIPS), which is an alternative to the new Russian sanctions under the Society for Worldwide Interbank Financial Telecommunication (SWIFT). If and when China increases oil and gas imports from Russia in the near term, especially if transacted via CLIPS, the Chinese Communist Party must themselves face some serious sanctions!

The evidence increasingly indicates that Beijing is thumbing its nose at the Paris Agreement and Glasgow Climate Pact—all in the name of economic growth and exploitation of an opportunity to increase its energy imports from Russia to fuel that growth.

The moral of the story? Watch the CCP’s actions—not its words—to discern the truth.