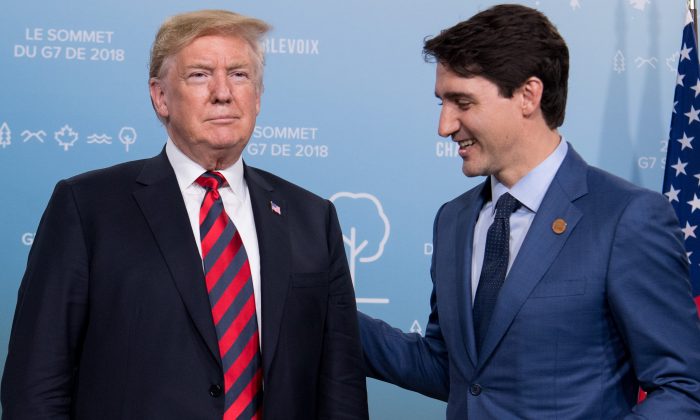 US–Mexico–Canada Trade Agreement a Win for All 3 Nations

After more than a year of negotiations, the three national governments, sometimes referred to as the “Three Amigos,” recently agreed in principle to change and rebrand NAFTA, which today regulates what has grown to more than $1.2 trillion yearly trade in goods and services. The new agreement is renamed the U.S.–Mexico–Canada Agreement (USMCA).

What else has changed?

The investor-state dispute provisions (Chapter 11), highly detrimental to Canada, have been removed.

The U.S. attempt to remove protections for Canada’s cultural and media industries was abandoned.

The three governments agreed to improve labor and environmental rights. Mexicans will be able to form unions more easily; their trucks crossing the U.S. border will have to meet tougher environmental standards.

A joint committee to review the conduct of macroeconomic policy in the three countries has been introduced.

Canada successfully fought off the U.S. attempt to remove NAFTA’s independent dispute-resolution mechanism (Chapter 19). The three countries may now challenge each other’s anti-dumping and countervail duties before panels of USMCA representatives, rather than in U.S. courts.

American dairy farmers get improved access to the Canadian market—a victory for U.S. President Donald Trump. Canada has agreed to expand duty-free access to its domestic market—reportedly slightly more than was already offered in the renamed Pacific Partnership (TPP) negotiations with the Obama administration. In practice, this affects only a fraction of 1 percent of Canada’s total exports.

The contentious class 6 and 7 milk products are normalized. Canadian dairy farmers are understandably displeased with the Trudeau government’s decision to let more American milk pass through the tariff wall that protects the supply-management system. While there will be subsidies for Canadian dairy farmers to compensate, the agreement will have little or no impact on consumer prices in Canada.

The steel and aluminum tariffs Trump imposed on Canada under the pretense of U.S. national security have done damage to both economies. Ford Motor announced that the two levies cost it more than $1 billion last year alone.

The head of the U.S. Steelworkers’ Union has come out against both measures. They remain in place because Canada has already responded to them with dollar-for-dollar retaliation; now is an excellent time for both governments to call a truce.

Praise came from both the auto workers’ union, Unifor, and the Canadian Labor Congress for avoiding similar tariffs on the auto sector.

USMCA will limit the number of cars and value of automobile parts that Canada can ship to the United States without paying higher duties. Beginning in 2020, in order to qualify for zero tariffs, a car/truck will have to have at least 75 percent of its parts produced in the United States, Mexico, or Canada.

Also beginning in 2020, at least 30 percent of the work done on a qualifying vehicle will have to be done by workers earning a minimum of $16 per hour—roughly three times more than Mexican auto employees now earn. This will be a boost for auto industry workers, but it will increase car prices and make it harder for North American-made cars to compete on international markets.

USMCA forces Canada and Mexico to respect the long patents the United States gives to its pharmaceutical companies. Specifically, the intellectual-property chapter includes an extension of the length of time new, very costly biologic drugs will be protected from generic drug competition.

The extension means that U.S. drug companies will be able to sell their biologics in Canada for a full decade, delaying the entry of cheaper generics by two years. McGill law professor Richard Gold, an expert on intellectual property, says this could cost Canadians “tens of millions” annually.

One of USMCA’s new features is a clause that effectively provides the United States a veto over any free trade deal the other two partners might wish to negotiate with a listed “non-market country,” such as China (which is already on the U.S. list).

The Nobel laureate economist Paul Krugman correctly predicted years ago that Beijing’s ongoing refusal to let its currency float would cause retaliation from economies where a manipulated yuan creates an enormous competitive advantage for China.

Chrystia Freeland, Canada’s respected foreign affairs minister, says the new agreement preserves the successful economic architecture that has long governed North American trade. Critics judge that the United States is determined to dictate the terms of commerce, and the smaller partners could either go along or face years of harassment.

Despite all, the USMCA is for now seen as a “win” for all involved. Trump gets his first “major” trade deal just in time for the midterm elections. Mexico’s outgoing President Enrique Peña Nieto leaves office proudly; president-elect Andrés Manuel López Obrador avoids facing trilateral trade negotiations. Prime Minister Justin Trudeau can assert that he successfully defended Canada from an economic calamity.

David Kilgour, a lawyer by profession, served in Canada’s House of Commons for almost 27 years. In Jean Chrétien’s cabinet, he was secretary of state (Latin America and Africa) and secretary of state (Asia-Pacific). He is the author of several books and co-author with David Matas of “Bloody Harvest: The Killing of Falun Gong for Their Organs.”