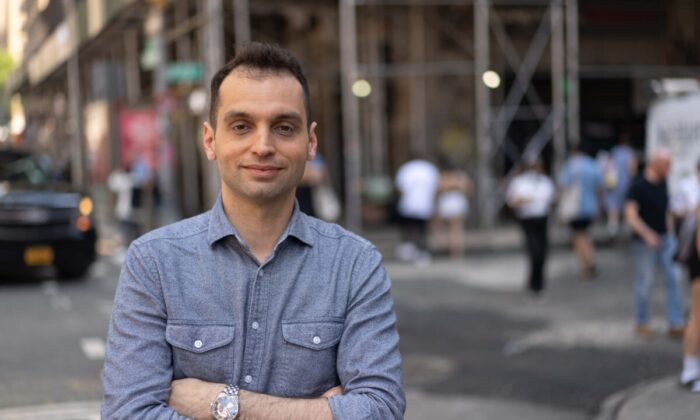 Konstantin Kisin, author of the new book, “An Immigrant’s Love Letter to the West.” (Jack Wang/The Epoch Times)
US Features

The Tyranny of Utopia

We're embracing a level of totalitarianism deemed necessary for the utopia they're imagining,' says author Konstantin Kisin
By Jan Jekielek

In a recent episode of EpochTV’s “American Thought Leaders,” host Jan Jekielek discusses multiculturalism, self-censorship, and the undermining of Western culture, with Konstantin Kisin, author of the new book, “An Immigrant’s Love Letter to the West.” Born in the Soviet Union, Kisin is a UK-based satirist, political commentator, and co-host of the “Triggernometry” podcast.

Jan Jekielek: This idea of not appreciating what we have really comes out in “An Immigrant’s Love Letter.” This is probably the freest society that has ever existed, yet many people feel that it’s terrible.

Konstantin Kisin: Many young people haven’t seen other societies and don’t understand that our problems pale with insignificance when you contrast them to those of other countries. Here’s just one example. The Russians protesting this war with Ukraine initially went out in small groups, a few hundred people, and they were all immediately arrested. Then they started going out in single protest, a man or a woman with placards saying, “I’m for peace,” and they got arrested. Then, satirically, they would go out with no placard, just their hands in the air, and they would get arrested.

That is the paranoia and oppression that many people around the world live with right now. If you’ve grown up in New York or London, you have no conception that it exists.

We talk about eliminating racism or sexism from our society, but we can’t even eliminate murder, rape, or many other problems—because we’re not perfect. We’re human, and we’re fallible. We can’t get to a point where we’ve got zero problems in society unless we’re willing to use extreme authoritarianism to achieve it.

And this pursuit of eliminating certain problems is why we’re seeing authoritarianism used to shut down comedy, media conversations, and politicians that challenge the accepted narrative. We are embracing a level of totalitarianism deemed necessary for the utopia they are imagining.

Mr. Jekielek: Yuri Bezmenov once outlined the Soviet Union’s project to subvert America. As far as I can tell, we’re living in the world he predicted. He talked about this long stage of demoralization, stopping people from believing in themselves. Then comes a period where this is normalized. Then there’s the stage of crisis. It feels like the West is in crisis, where the values upon which American society was built are now up for grabs.

Mr. Kisin: As I say repeatedly in the book, I don’t believe that the West has anything to fear from communist China, from Vladimir Putin’s Russia, from Islamist terrorism, or from whatever threat you can name. We have nothing to fear, as long as we have confidence in ourselves and stand up for what we believe. That’s why I wrote “An Immigrant’s Love Letter to the West.” In its own small way, it’s an antibody injection into the body of Western civilization. The only way a civilization collapses is from internal discord. Other powers may try to help that destabilization along, but we’re doing this to ourselves.

And most people have no idea they are demoralized. They don’t realize this lack of confidence in their society isn’t normal. We’re in a society now that endlessly questions itself. A society can improve by asking questions and demanding more of itself, but the fact that we spend so much time beating ourselves up is not leading to good things.

Mr. Jekielek: Your critique of multiculturalism is one of the most thoughtful and interesting things that I’ve come across.

Mr. Kisin: The difficulty in Western Europe—I know less about the United States—is that we don’t understand the meaning of a multiethnic society, where people from different ethnic backgrounds and religious groups live together peacefully. It’s a challenge, but huge benefits come from that in terms of innovation, drive, and creativity. But that’s not the same as saying to people, “You can live by the standards you choose. There’s no need for you to integrate into our society, to abandon your ways of thinking and doing business that you had before.”

That doesn’t work in America or the United Kingdom. We have to share certain things in common to live together cohesively. For example, we must all live under the same law. We can’t have people who demand that their religious legal system is parallel with the state’s legal system. A multiethnic society is important and desirable, and hugely beneficial. A multicultural society is a recipe for a disaster.

In my opening chapter I say, “Trust me, West is best.” I’m not claiming that Western society is the best in some universal way. I just think it’s best for people whose values include things like freedom and the opportunity to speak freely. Plenty of people in the world are more concerned about other things.

But there are those of us who think freedom and the opportunity to speak freely are important, that it’s important to work out what’s true and what’s not true, as in the sciences of physics, chemistry, and biology. They’re not things we can deconstruct with no consequence. In our technologically advanced, scientifically expansive societies, freedom makes it all happen.

Mr. Jekielek: It’s also the reason why so many people are clamoring to get here.

Mr. Kisin: Right. Only a society like this one allows you to achieve your potential. It doesn’t matter where you come from or what your skin color is. That’s why people come here. By the way, look at all these activists in this country and the UK who talk about how America and Britain are the most racist countries in the world. Do you notice that they never leave? They don’t go to whatever better places exist out there.

Mr. Kisin: It’s a tool to shut people up, because if you can’t win the argument, you don’t want to have a conversation, and you have to shut down anyone who questions you. They’ll take a gay person who doesn’t agree with their politics, and they’ll say he’s got internalized homophobia. They’ll take a black person and say, “You’re a traitor to your race.” For these people, it’s not about truth; it’s about winning.

Mr. Jekielek: Comedy has been decimated by these types of rules.

Mr. Kisin: What has happened with comedy is that the people who are very successful can do whatever they want. With Dave Chappelle or Ricky Gervais, there’s no problem with free speech. They can do whatever jokes they want. Netflix is going to get a few complaints about Chappelle’s show, but they’re going to keep it up on the platform. But with the next generation of comics, you’ve got a very different situation.

In comedy clubs, for example, audience members are now comfortable going to the owner of the club and saying, “I didn’t like what that comedian said. Don’t book him again.” Twenty years ago, no one would’ve respected that request, because it was universally understood that comedy will provoke and challenge.

There’s a culture of self-censorship in comedy. When Lionel Shriver, the writer, was on our show, “Triggernometry,” she made the point that we don’t even know what books aren’t being written at the moment. We don’t know what jokes aren’t being told. People are self-censoring a hell of a lot, because they know the punishment that comes if they don’t.

Mr. Jekielek: I want to jump to the last chapter in the book, “10 Ways to Destroy the West.” Number one, “See everything in terms of race.” Two, “Embrace self-loathing.” Three, “Make everything political. Yes, I mean everything.” Four, “Get your political opinions from celebrities.” Five, “Remember truth is a lie. Six, “Promote socialism through bad capitalism.” Seven, “Start a battle of the sexes.” Eight, “Drink the Kool-Aid of cultural relativism.” Nine, “Encourage porous borders.” And 10, “Be a useful idiot.” Which of these is the biggest problem?

Mr. Kisin: Useful idiot is the biggest problem. There are some people who may have malicious intent, but I don’t think they’re in the majority.

The problem isn’t evil people running around who want to make things worse. The problem is people who buy into an ideology that gives them permission to do terrible things in the name of the greater good. Those people are the biggest danger to everyone in society. They are the useful idiots. This is the power of bad ideas, Jan. It can make people do terrible things and then feel good about it.