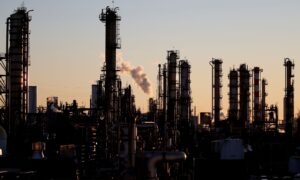 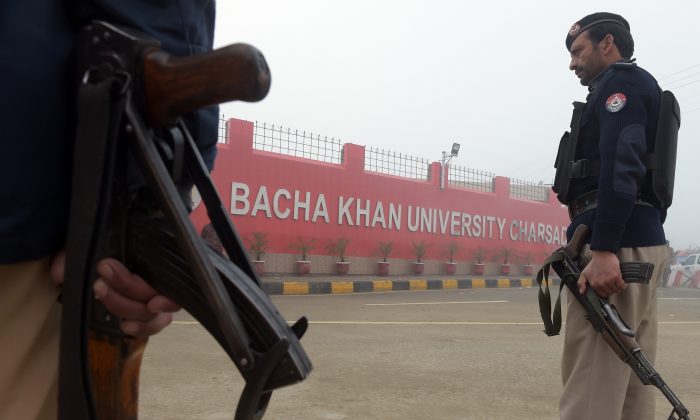 A Pakistani policeman stands guard in front of a school in Peshawar on Jan. 21, 2016, a day after militant attack on Bacha Khan University. (Hasham Ahmed/AFP/Getty Images)
Asia & Pacific

The attack on students of the Bacha Khan University in Charsadda, northern Pakistan, played out according to what has become a disturbingly familiar pattern in the region.

It was what is described by armed Islamist groups there as a “fedayeen attack.” Fighters of the Pakistani Taliban, TTP, were equipped to blow themselves up, but first shot all those they encountered until they were cornered and shot by security forces.

In the run-up to the attack, TTP recruits had received commando-style training and been designated fedayeen, or fighters who are prepared to give up their lives for God. An experienced TTP commander, referred to as an “ustad,” or professor, directed covert surveillance of the university. The ustad then devised an operational plan, including delivering the men and weapons to Charsadda without detection. It is now standard practice for the TTP commander to direct the operation by phone, staying across the border beyond the reach of Pakistani security forces.

Terrorist violence is down but Pakistan is still far from secure.

One of the reasons that the university attack has been particularly shocking for Pakistanis is that it took place at a time when the country seemed to have passed the peak of terrorist violence. After a decade of military operations, the Pakistan army has by now penetrated all of the tribal agencies along the frontier. Until June 2014, TTP fighters had secure bases and bomb factories around the towns of Mir Ali and Miranshah, but these were eliminated in the army’s North Waziristan operation.

During 2015, the Pakistani government also pursued a 20-point agenda of counterterrorism actions, designed to reduce terrorist financing, recruitment and freedom of operation throughout Pakistan—the National Action Plan (NAP). Deaths from terrorist violence in Pakistan duly fell by a third in 2015 relative to the previous year. But a spurt of other attacks during January point to the limits of what can be achieved through the military operations and NAP framework. Terrorist violence is down but Pakistan is still far from secure.

On the same day as the university attack, a suicide bomber in Kabul blew up the staff bus of Afghan TV station, Tolo, killing seven. The Afghan Taliban had previously threatened Tolo and claimed responsibility for the attack. Over the past month, the Afghan Taliban has directed a series of fedayeen operations against a mixture of soft targets and some associated with the military.

The ustads who plot the Afghan Taliban attacks in Kabul and the TTP attacks in Pakistan developed their skills in the old camps of Waziristan. In a sense they are all graduates of the same “terrorist university.” Both Taliban movements are still able to mount a terror campaign because they have used the time since summer 2014 to relocate themselves, reorganize their logistics, train new fighters and go back into action.

The TTP, has suffered a series of splits since 2014. The nominal emir is Maulana Fazlullah, the notorious commander from Swat District—but in reality the movement now has neither a charismatic leader nor an effective central command structure.

TTP commanders have long experience in kidnapping, extortion, and sustaining their fighters from criminal activities conducted under the guise of jihad.

Instead, multiple commanders who emerged while TTP held sway in Pakistan’s tribal areas, have established themselves in areas along the border, beyond the control of either government.

Each commander can still draw on his original fighters, who are mainly clansmen from the Pakistani frontier tribes. But the allure of being a mujahid is still sufficient that TTP commanders in eastern Afghanistan are also able to recruit local youths. Funding is largely decentralized, as the TTP commanders have long experience in kidnapping, extortion, and sustaining their fighters from criminal activities conducted under the guise of jihad.

The TTP fighters have now reverted to a more autonomous pattern of warfare. Each commander strong enough to maintain a group of fighters is free to ally with other jihadi groups or conduct independent operations. This is the opposite of the Afghan Taliban’s organizational approach, which emphasizes the idea of loyalty to a single emir. The TTP and Afghan Taliban pursue different strategic objectives. The Afghan Taliban is fighting to restore its Islamic Emirate to power in Afghanistan. The TTP has no prospect of overthrowing the Pakistani state but fights an existential jihad, intent on maintaining its status as mujahideen by waging war against those it has designated enemies of Islam.

The inter-connectedness of Afghan and Pakistani security is highlighted by the fact that the two campaigns of fedayeen operations run in parallel. However, the political and military leaderships on both sides of the border react differently to violence depending on where it takes place. There was horror in Pakistan at the killing of innocents in Charsadda. In contrast, many in Pakistan still cling to the idea that bombs in Kabul strike a blow against occupation. Pakistan’s counterterrorism measures have been directed against fighters who target Pakistan.

Residual sympathy and the confidence that Afghan Taliban does not directly threaten Pakistan have kept clamping down on its operations low on Pakistan’s security agenda. The idea of proxy warfare—supporting cross-border armed groups to conduct tit-for-tat attacks—also persists. By this logic, Pakistan’s intelligence services have to consider the possibility that their Afghan counterparts deliberately harbored the Charsadda killers, to punish Pakistan.

The latest upsurge of TTP violence suggests that security in Pakistan ultimately depends on restoring security in Afghanistan. The Afghan Taliban’s campaign has destabilized Afghanistan and left Afghan security forces struggling to hold onto the country’s main towns. This has created multiple no-go areas which have been exploited by the TTP and other armed groups hostile to Pakistan. It is in these areas that the old TTP commanders have been able to regroup. For a while after the December 2014 attack on the army public school in Peshawar, it seemed as if the authorities might clamp down on Afghan Taliban. In the end the Afghan Taliban was spared.

This time round, the Charsadda attack comes soon after the launch of a quadrilateral process in which China and the United States are meant to work alongside Pakistan and Afghanistan to bring the Afghan Taliban to the negotiating table. The process has so far been limited to diplomatic discussions and planning work.

The public comments of the main Pakistani delegate at the launch of the process were designed to make it clear that Pakistan has no intention of being rushed into punitive measures against the Afghan Taliban. However, if Pakistanis start to conclude that the Charsadda massacre was a predictable consequence of tolerating Afghan Taliban activities in Pakistan, this might just inject a new sense of urgency into collective efforts to end the Afghan Taliban campaign of violence.

Michael Semple is a visiting research professor at the Institute for the Study of Conflict Transformation and Social Justice at Queen’s University Belfast in the U.K. This article was originally published on The Conversation.