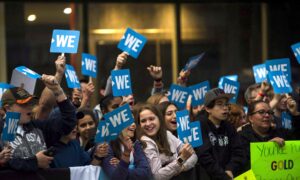 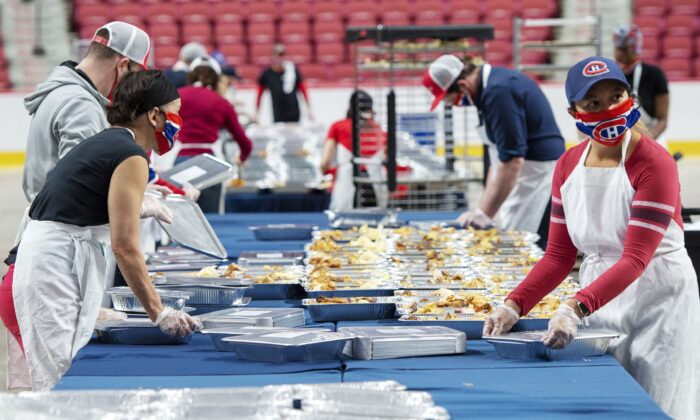 Volunteers prepare meals for food banks on the floor of the Bell Centre in Montreal on May 5, 2020. (The Canadian Press/Ryan Remiorz)
Viewpoints

The Two Faces of Charity

Charity is one of humankind’s greatest virtues and a key marker of successful civilizations. As tribes turned into cities and cities into nations, charity shifted away from the intimacy of personal sacrifice and became institutionalized along with other primary functions of advanced civilizations.

In principle, charity has the power to be directed with accuracy toward a noble and worthy cause. But large donations come with strings attached, and ethical integrity can be compromised when charitable acts are incongruent with the charitable spirit.

The WE Charity scandal has shone an uncomfortable but necessary light on the nature of large charitable organizations whose fiscal policies and political influence beg scrutinizing. At the heart of the question is whether these large-scale charitable institutions are altruistic entities focused on the essence of their cause, or self-serving conglomerates who wield undue political and social power.

To varying degrees, they are intractably both.

With WE Charity winding down its operations in Canada over the political fallout that continues to dog the Liberal minority government, it is apparent that there are very real consequences when charities struggle to retain a high degree of moral authority, at least in the eyes of the public.

Whether WE engaged in improper lobbying ahead of being awarded the controversial sole-source contract for a student volunteer grant program is a matter of debate, but it is an issue that continues to plague the Liberals as opposition parties push for further investigation into potential parliamentary wrongdoing.

Procurement and dissemination of millions or billions of dollars is a complicated business and stakes are high when it comes to administering that capital. This is not to say these organizations are incapable of doing good; they often do and with measurable results. But charity itself can easily take a back seat to the semblance of charity, in cases where spectacle, replete with high-paid speakers and galas, can overshadow substance. As a consequence, political motivations play an inordinately large role when it comes to financing, lobbying, and channeling capital into chosen charities.

It is not that these institutions harbour nefarious motives, only that they are liable to be unduly influenced by special interest groups with their own agendas. Maintaining the infrastructure of charities like WE requires a certain emphasis on social perception that can eclipse boots-on-the ground charity.

It’s worth examining whether our charitable instincts have atrophied in our modern age of technological advancement, where we are less dependent on, and less connected to, our immediate communities.

Charity is largely practiced by donating a dollar or two at the store checkout rather than pitching in at the local food bank or homeless shelter. It’s more an apology for our affluence than an inspired act of goodwill. In our modern mode of giving, there are degrees of separation between the giver and recipient that do little to foster the charitable spirit where personal connection and sincerity are prerequisite.

Sixty-four-year-old Gia Tran, a resident of Vancouver’s downtrodden East Side, rises before 6 a.m. every day to collect bottles and cans from sidewalks and litter containers, walking long distances before cashing in her haul at the Return It Depot. Then she does something remarkable. Instead of keeping the fruits of her labour, she takes the bus to the BC Cancer Foundation and other charities to donate the day’s earnings, a few dollars or more. She has been doing so for more than 20 years and has donated over $15,000.

Tran’s is a sacrifice of magnitude, of time and resources that she could choose to use otherwise. But, seemingly possessed by an indomitable charitable spirit, she has transcended what could be a mundane life and transformed it into something worthy of celebration—embodiment of the rare and valuable virtue of altruism.

Charity, as exemplified by Tran, is virtue in practice, a mode of being that places primary importance on the well-being of others at the willing sacrifice of one’s personal interests. It implies meaningful loss, a giving up of things we hold dear so that others, sometimes strangers, can improve their lot. The charity of the soup kitchen volunteer enriches the community but also has a profound effect at the individual level.

Selfless acts are blessed with an inherent nobility that reverberates beyond the immediate moment of giving. It is goodness for goodness’s sake and a psychological gift for both the giver and recipient, as the former practices the higher virtues of kindness, generosity, and empathy, while the latter is uplifted by the compassion of their fellow man, rousing their own better nature to do the same.

Charity has deep roots in every civilization as a universal value that transcends dogma and creed. In Christian theology, it is one of the seven noble virtues and its practice is considered a manifestation of man’s inherent divinity. In the West, the Judeo Christian ideas of “love thy neighbour” and “do unto others” have underscored the successful advance of civilization. In Buddhism, generosity is considered one of the “perfections,” and emphasis is placed on the selfless spirit of the action over the material. These are elements of faith in action and not cursory, abstract ideas.

Although religion is not a prerequisite for the charitable instinct, the act of true charity will move us closer to actualization of our own transcendence.

Can the spirit of charity retain its purity and power at scale? Perhaps not entirely, as the WE scandal has indicated, but this should not serve to dissuade us from actualizing our own charitable spirit as we navigate the post-pandemic world in which numerous hardships have befallen our friends, neighbours, and fellow Canadians.

If there was ever a time to invigorate our charitable instincts it is now, when the need is great and our faith in humanity needs bolstering. True charity is the embodiment of one of the great human miracles, and miracles are presently much in need.