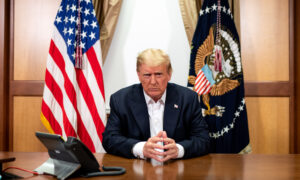 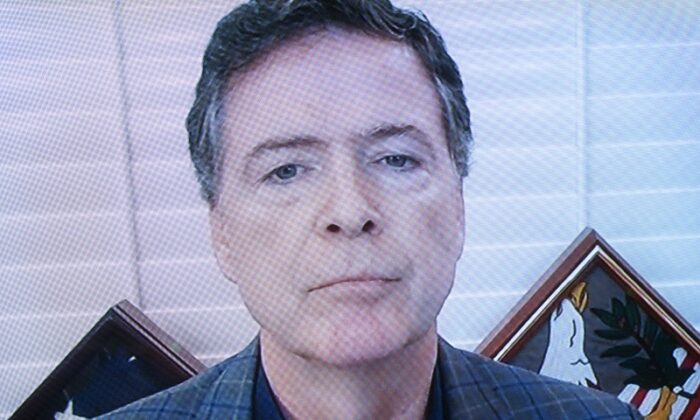 Former director of the Federal Bureau of Investigation James Comey, speaks via a TV monitor during a hearing on Capitol Hill in Washington on Sept. 30, 2020. (Stefani Reynolds/Pool/Getty Images)
Viewpoints

The foundations of American civic life are collapsing. Venerable civic and public institutions that once supplied order and a sense of belonging to American communities are crumbling and in danger of organizational collapse.

Books could—and probably will—be written about the whys and hows of this perilous subversion of American civic life. To be sure, part of the present crisis has been caused by diverging moral values within society. But I think the more immediate blame for our ongoing social disintegration stems from venerable institutions becoming infected with the “Two Cs”—corruption and cowardice—that subvert their vital social responsibilities and destroy trust in their institutional missions.

Space only allows a few examples of both Cs. (I am sure readers can supply many more.)

Let’s start with the media. The First Amendment explicitly protects “freedom of the press” because our founders understood that the widespread dissemination of information about civic life is vital to self-governance. But the central organs of the press today—with a few exceptions—allow reporters’ left-wing ideology and visceral loathing of President Donald Trump to subvert the veracity of their reporting.

The New York Times is the worst offender. As “the paper of record,” the “Gray Lady” has traditionally been the leader in determining what stories are newsworthy and in establishing the news narrative of the day for other outlets and electronic media. But in the past four years, the NY Times squandered the trust earned over many decades by becoming more a “get Trump!” propaganda outlet than a disseminator of reliable political news.

Worse, it has become blatantly mendacious and unreliable as an institutional news source.

In 2018, for example, the newspaper lent its prestigious op-ed page to a column highly critical of the president by “Anonymous”—whom the paper described as “a senior official in the Trump administration whose identity is known to us and whose job would be jeopardized by its disclosure.” Anonymous bragged about being at the heart of the anti-Trump “resistance” within the administration to save the country, part of a cabal seeking to “frustrate parts of his agenda and worst inclinations” at the highest levels.

The piece created a national sensation and national guessing game about the betrayer’s identity. Was Anonymous Trump’s chief of staff or a Cabinet secretary? Was it possibly Ivanka or, perhaps Jared Kushner?

None of the above. It was just revealed that Anonymous is Miles Taylor—a low-level aide in the Department of Homeland Security when the bombshell piece was published. Not only was Taylor not a “senior official,” he was someone who wouldn’t have interacted directly with the president or most members of his senior leadership. To say the least, Taylor’s opinions about Trump wouldn’t have mattered to anyone had the column been published under his real name.

This is the most important point: The NY Times lied blatantly about Taylor’s status to give the column a heft in undermining Trump that it didn’t actually deserve. Talk about a breach of trust with readers! Talk about destroying the newspaper’s institutional value to the country!

The Michael Flynn debacle provides another example of ideological corruption undermining venerable institutions, in this case, the FBI, national security agencies, and even, the neutrality of the federal courts.

First, Flynn—who was Trump’s first national security adviser—was recorded by the FBI speaking to the Russian ambassador during the transition, a perfectly proper activity. Then, Flynn was unmasked by Obama administration officials and the existence of his conversation leaked to the press, along with intimations of impropriety.

Flynn was subsequently investigated by the FBI—at the behest, perhaps, of President Barack Obama and Vice President Joe Biden—to get dirt on the incoming president, or possibly, destroy Flynn’s effectiveness as the head of the National Security Council. Then-FBI Director James Comey later bragged he sent agents to speak to Flynn without going through proper White House channels and that Flynn wasn’t told he was under any investigative threat.

The agents initially determined that Flynn hadn’t lied, but the “302” reports of the conversation were altered. Flynn was then indicted and pressured with threats of prosecution against his son to plead guilty to lying to the FBI.

When the wrongdoing against Flynn finally came to light, he sought to withdraw his plea, supported by the Department of Justice. The motion should, at that point, have been pro forma as the government and defendant were in agreement. But U.S. District Judge Emmett Sullivan shockingly refused to dismiss the case—and appointed a retired judge to act as a quasi-prosecutor against Flynn in a clear attempt to keep the case alive.

When the Court of Appeals ordered the prosecution dismissed, Sullivan became a litigant in the case by successfully filing for an en bank reversal of the order—an act that seems unprecedented. And now, six months after the government’s request for dismissal, Sullivan still sits on the case like a bird incubating an egg, in a clear attempt to run out the Trump administration clock, or perhaps, force the president to pardon Flynn and thereby undermine any subsequent legal claims Flynn might have against the government.

Other recent examples of corruption of our institutions are ubiquitous. The science sector’s objectivity has been badly undermined by its pursuit of blatant ideological agendas.

Twitter betrayed its claim of partisan neutrality by blocking The New York Post’s account after it reported an accurate story about the contents of Hunter Biden’s laptop computer.

The Boy Scouts betrayed its traditional supporters and own long-stated values, resulting in a totally predictable bankruptcy amid accusations of sexual abuse of boys by the organization’s volunteers over decades.

The NBA yielded to “woke” protests by players—destroying its U.S. audience base as it profits from financial deals with China, the worst tyranny in the world. Obviously, the list goes on and on and on.

Cowardice and betrayal have also destroyed the people’s faith in institutions. They call it “cancel culture.” Think of the number of universities that have disinvited controversial conservative speakers, betraying the role of universities as spaces for the robust exchange of ideas.

Or how New York Magazine fired influential gay columnist Andrew Sullivan because his colleagues were outraged by his opposition to transgender orthodoxies.

When the Girl Scouts tweeted a simple, nonpartisan congratulations to Amy Coney Barrett as the “fifth woman appointed to the Supreme Court,” the organization deleted the tweet after intense criticism from the political left for daring to laud a conservative, giving the clear sense that the only women of accomplishment that merit applause by the organization are liberal.

To remain cohesive, a society relies on trustworthy and resilient public and private institutions to provide permanency, comity, and commonality among its people. The Two Cs are subverting this vital role.

The only path back from the abyss is for our institutional leaders to engage what remains of their influence with the integrity and courage required to regain the respect and fealty of the American people.