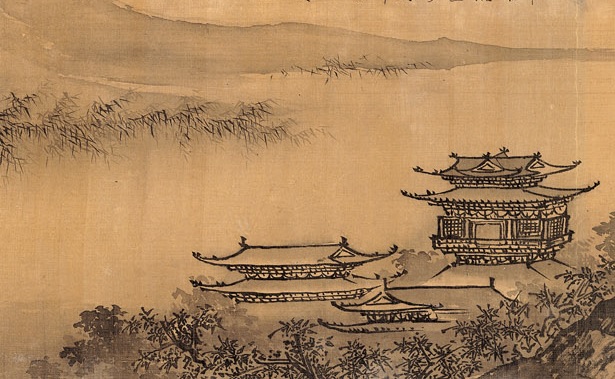 The Two Brides: An Ancient Chinese Tale of Benevolence

For thousands of years, the Five Cardinal Virtues—benevolence, righteousness, courtesy, wisdom, and faith—have guided the Chinese people in governance, family, and individual conduct. First taught by the sage Confucius, they form the cornerstone of traditional Chinese morality.

First in the virtues is benevolence, from the Chinese character “ren.” Consisting of a radical meaning “human” together with the number two, “ren” literally symbolizes interpersonal relations, which should be caring and respectful.

“Ren” is demonstrated in the following folk story, when a wealthy woman extends a helping hand to a stranger—and is blessed for her selfless compassion.

It was the Jiajing era of the Ming Dynasty, in the southern coastal city of Huangyan. One autumn afternoon, a luxuriously decorated marriage litter containing a wealthy bride of a good family was carried out the western gate. As the happy procession headed north, rain began to fall; luckily, a roadside pavilion in the hills offered shelter from the elements.

A second, far shabbier litter, was hastily set down beside the first. The shelter was big enough for only the two litters, so the attendants sought refuge elsewhere. The two young women sat side by side in their bridal seats under the pavilion.

The bride in the luxuriously decorated litter heard the other girl crying and asked,

“Dear sister, it is our good day, why do you weep?” The other bride answered, “My sister, how could you imagine my misery! Father is in debt for my marriage, and word has it that my husband-to-be is also poor. What life am I to live?”

The wealthy bride could not think of a better way to help the poor woman, but realized that she had two bride’s purses forming a portion of her dowry. Without too much thought, she passed one of the red purses to the other woman, who thanked her in pleasant surprise. Then the rain stopped, and they parted.

The wealthy bride, Wang Lanzhen, was an only daughter; her groom was the respected scholar Zheng Mudi. Before them was a happy life.

But one day after two months of the marriage, Japanese pirates descended upon Lanzhen’s hometown of Huangyan. Her entire family was slaughtered in the raid. The community, fearing more incursions, elected her husband commander of 300 volunteer troops to offer resistance. Mudi sold his property to prepare for the coming battle, and received promises of reimbursement from local elites.

Mudi led the militia to victory, killing hundreds of pirates at Niutou Gorge. The area was henceforth known as Pirate Grave Pond.

But when Mudi returned home to his wife, he found his family in debt and the promises of repayment forgotten by the community. He and Lanzhen were further hounded by village leaders, who accused him of seizing military power under the guise of fighting piracy. Learning of his coming arrest, the disenfranchised couple and their daughter fled during the night, going their separate ways in search of refuge.

Lanzhen wandered south with their daughter and found work as a servant. Her employer, Xu Jingsheng, ran a wine shop together with his wife, Gu Jinhua.

For three years, Lanzhen worked there. Finally, she traveled back home in search of her fugitive husband, but without success. Before leaving, she gathered some of her old belongings stored by old friends, among which was the remaining dowry purse.

Returning to her employer’s home and upon discovering the red purse, Lanzhen wept and grieved when she recalled the happiness of her wedding day, unaware of the blessings that had taken root with her spontaneous act of charity.

As luck would have it, Gu Jinhua was the poor bride who had taken shelter next to Lanzhen years ago under the pavilion, and whom she had given one of her red, silver-filled purses. Jinhua’s groom then used this gift to pay off their family’s debts and go into the wine business. Their hard work and diligence had paid off, yet they never forgot their unknown benefactor. Jinhua thus kept the red purse enshrined in a place of honor, awaiting the return of its original owner.

At that moment, Jinhua entered Lanzhen’s quarters to find her in tears and clutching what seemed to be the purse she had received that rainy day under the pavilion.

“Why are you holding that purse?” Jinhua asked.

“It is mine,” Lanzhen said. Jinhua hurried to the shrine and found that her own purse, identical to the other, was indeed there.

“You are my dear sister!” Jinhua exclaimed, and the following exchange revealed the lost story of the two brides.

Jinhua and her husband wanted to split their wealth with Lanzhen, but she refused.

“It was by your own diligence that you earned your present fortune,” Lanzhen said. “Even if I had kept the purse, I would have squandered its riches.”

The couple admired Lanzhen’s generosity and continued to take good care of her. They also arranged for their children to be married.

Lanzhen’s good fortune did not end there. Mere days passed before her long-lost husband came knocking. It turned out that after his escape, he had entered service with a powerful general and was promoted to a high rank for his ability.

Reunited, Lanzhen and her husband set off for home. On the road back, they came across the pavilion, where Lanzhen paid her respects by hanging an inscription at the site.

This story was passed down and was spread throughout China’s folklore. In 1940, it was adapted into opera called “The Unicorn Purse.”